DiscoverWhere To Start Up with Earl Schaffer 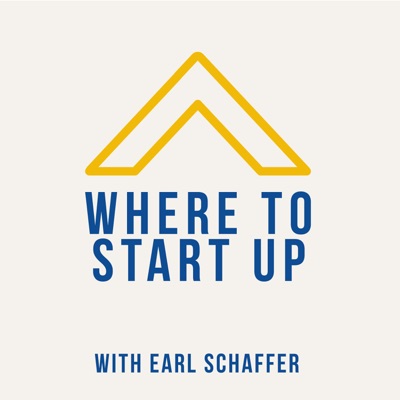 Where To Start Up with Earl Schaffer

Where to Start Up is about stories of successful starts, told by entrepreneurs, investors, hackers, athletes, and more. Earl Schaffer explores a wide range of topics to make starting just a bit easier.
6 Episodes
Reverse

Bastian Hackl (aka zacki_fpv) is one of the top drone pilots in the world. He and Earl chat about how he got into drone racing, how learning to fly was different a few years ago, and how he ended up becoming one of the world's best.

Caleb Stultz is not only a dear friend of mine but also one of the most interesting people I know. He's also the only person I know, who's held a world record. But this episode isn't about that (although he does share what world record he held) - it's about how he taught himself how to code in his mid-twenties, while he was living abroad. And to top it all off we chat about how he was able to build a social media following of over 10k followers, that he educates about coffee.Chapter Markers:00:03:29 Starting out in College00:07:44 Teaching in Indonesia00:16:33 Coding & Coffee00:35:43 Teaching how to Code00:39:00 Getting an investment from Redfoo (LMFAO)00:43:19 Venturing into Coffee00:50:11 Being an iOS Developer at Savvy Apps00:54:20 Takeaways

When Good is Good Enough with Alex Wilhelm | Co-Founder @Validated

On this episode, Earl chats with Alex Wilhelm, Co-Founder of Validated, a mobility payment platform that was acquired by moovel group where Alex went on to be the principal engineer up until June 2020. Alex talks about how he turned an old energy facility into a bitcoin mining farm, what he learned being on the popular TV Show Shark Tank and what his philosophy on building a minimum viable product is.

Hannes and Earl chat about how to build a predictive customer success model. Hannes is originally from Austria but has been living in the San Francisco Bay area for several years now. He is an ex-Googler and has also previously worked for LinkedIn. While his degree is in computer science he found his sweet spot in Customer Success, currently working for @Leanplum, a customer engagement platform. In this Episode Hannes discusses his pathway to Silicon Valley, what he learned from losing million-dollar clients and how gut feeling is critical when it comes to customer success.

Rick Rasmussen, lecturer @UC Berkeley and Earl talk about the first step to the Epiphany - Customer Discovery. Rick was born and raised in the San Francisco Bay Area and has spent his whole life in the tech industry. He now teaches Entrepreneurship @UC Berkeley and is a mentor for several startup programs - most notably the Austrian GoSiliconValley Initiative. Feel free to connect with Rick and Earl on LinkedIn.

Steve Adelman, Managing Director @Nexus Partners and Earl talk about how to manage a startup in times of crisis. Steve started his career in the Israeli Army, where he was a paratrooper for 3 years. He later joined AT&T’s Bell Labs, the innovation powerhouse, responsible for inventing many of the computer and communication technologies we use every day. Steve has also been a successful businessman and investor for several decades.In 2001, when the dot.com bubble burst and in 2008, during the financial crisis companies were forced to innovate and manage a new landscape. The same is true for today where many startups need to rethink their value proposition and business model. Steve and Earl talk about where to start this process, what investors are up to right now, and how you might be able to snatch up funding right now. Feel free to connect with Steve and Earl on LinkedIn.
See More
Comments