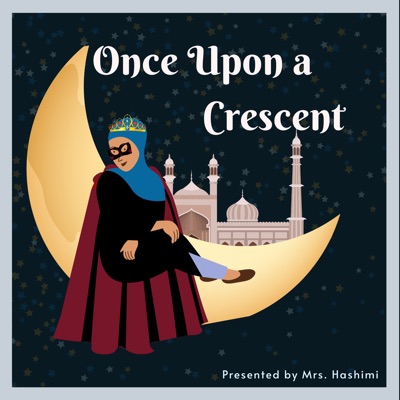 Once Upon A Crescent: Muslim Kids Podcast

Once Upon a Crescent is a collection of Islamic bedtime stories for children. Written and produced by a Muslim elementary school teacher, these stories aim to impart Islamic morals to kids through light-hearted storytelling. Not only are stories a great way to settle into a bedtime routine, but they also provide rich opportunities for meaningful dialogue between parent and child. Snuggle up with your little one and feel free to use this podcast as a starting point to talk about Islamic values. Our goal is to facilitate some important moral conversations by introducing Islamic values with storytelling.

Ibrahim volunteers at the local Masjid to pack & distribute 250 iftaar food boxes for a Ramadan drive -thru event. When Br. Siddiq instructs Ibrahim to return to the nature trails to retrieve something from the Masjid office, Ibrahim is faced with his fears once more. Except, this time he has a 4 yr old companion named Noor to keep him company on this nature adventure! ----more---- Ramadan Mubarak and Welcome to Season 3! Email me at info@mrshashimi.com if you are interested in sponsoring the podcast by having your child's name as a character for other upcoming stories on Once Upon a Crescent! Special thanks to Ali Memon from Corporate Majlis Podcast for the voicing of Br. Siddiq.

A normal grocery shopping trip turns into something more for Hamza as he finds himself in a very uncomfortable situation regarding toys. Hamza recognizes his positive and negative thoughts in order to correct a mistake he's made. This story aims to create an awareness for Muslim kids about their inner dialogue! Special thanks to @corporatemajilispodcast Host Ali Memon for his voicing of characters. I wanted to sincerely thank you all for listening to Season 2 of Once Upon A Crescent! Remember to share with your friends, family and loved ones. Stay tuned for Season 3! www.mrshashimi.com

In a land far far away, a dinosaur land is seized by an evil T-Rex named Big Rex . A small, yet brave pterodactyl, Izan, steps up to the task of restoring justice in this dinosaur land. He and his pterodactyl friend Aizah, come up with the most unusual plan to drive away Big Rex from their land! This story is about bravery when facing an evil. Special thanks to @corporatemajilis host Ali Memon for his creative voicing of Big Rex & to Ena Lateef for her dedicated time & help with the voice of Aizah !

When Amani & Ayah have to drop off biryani to their elderly neighbor, Rashid Dada, they learn a valuable lesson about being merciful to those who are less able than them. With freezing temperatures outside, these sisters must push through the bitter cold weather to deliver food in the neighborhood. Often, merciful deeds can bring their own sweet rewards in little ways! Special thanks to Corporate Majlis podcast host Ali Memon for lending his voice. Also, shout out to Ena Lateef for voicing Amaani. Thank you both! www.mrshashimi.com

Bearjaan takes Beaver Baaji’s favorite blanket to use and cuddle with. When Benyamin Bat sees how devasted Beaver Baaji feels at her blanket being taken, he tries to rush past her feelings by telling her NOT to cry.... but with the help of a heartfelt dua and a helpless cry to Allah, Beaver Baaji is able to overcome an unBEARable confrontation with Bearjaan.

What is a kid to do when plans don't follow through as expected? How does a kid manage feelings of disappointment? Yusuf faces these challenges and learns to accept Allah's plans for us in our day, when things are not in our control. We plan and we plan, but Allah is the best of Planners. Subscribe and share if you enjoyed this story and visit our website at www.mrshashimi.com

Yayah & Hawaa are giraffes living in a savannah habitat. These two giraffes face an ant invasion problem. Countless ants have taken over the treetops that they eat from. Now all the leaves they eat have ants crawling all over it! The power of pausing allows them to adopt a gentle approach to their problem. Find out how gentleness can lead to a win-win solution in this story!Subscribe and share if you enjoyed this story!

Hedaya & Ruqayyah embark on a mystery mission when they discover a piece of jewelry lying on the playground. They ask around in hopes to return this necklace to its rightful owner. Their mystery mission leads the girls to a unique,  new friendship with the owner of the necklace, Mahnoor and her sweet sister Maryam.

Based on true events and dialogue, this story reflects common conflicts between siblings. When getting ready to leave the house for the park, big brother Hasan tries to rush his 4 year old brother Qasim. Qasim is concerned about a very specific t-shirt he's trying to find and resists being hurried. Things get heated and angry words are exchanged. This story highlights forgiveness towards one another even when emotions are running high. www.mrshashimi.com

Safi the Squirrel has endless options awaiting for him at an ice cream stand at the park. His friends Mustafa & Samah the Squirrel create a marvelous combination of flavors for their ice cream treat, but Safi didn't get the chance to do this because of a grumpy mood that carried on in his day! Fortunately, he has friends that help him  work through this challenge. Subscribe and share if you enjoyed Safi's story!

Aminah faces disappointment as she learns that Mama will not be available to help Aminah style her hijab for the aqeeqah party her family is hosting. Baba steps up to the challenge to assist in a task that will require all hands on deck, even big brother Adam gets involved in helping Aminah get ready for their party! Welcome Back listeners! We are excited to have you back for our second season of Once Upon A Crescent!

Arhaan's mission to find his missing Lego pieces around the house turns out to be a very frustrating task. His toddler siblings, Muhammed & Sakina are really testing his patience as he runs out of playtime in search for his things. When it's time for Maghrib Prayer, Arhaan finds himself feeling all kinds of mixed up emotions because of the time he just lost. This story is based on true events and is a relatable one for all elder siblings. Sometimes it's hard being the eldest!Subscribe and share if you enjoyed this story and can't wait for Season 2!www.mrshashimi.com

Ibrahim's first hike outdoors proves to be one filled with adventure. Despite his anxiety and nervousness, Ibrahim treks through nature, trusting in Allah for his safety. With the help of his group members Ismael, Fatima & AbuBakr, this hike turns out to be a great learning experience!Subscribe and share if you enjoyed this story!:-) www.mrshashimi.com

For the Classroom Talent Show, Safiya signs up to showcase her passion for science investigations in front of her whole class. When Haleema, her classmate, makes fun of Safiya's talent, she is determined to prove to Haleema how awesome her science experiments can really be. Safiya faces challenges and self-doubt, but finds ways to overcome these hurdles through Dua and a gentle reminder by her Mama.

The coronavirus pandemic has forced changes in Eid traditions in homes everywhere, especially in Sirru & Nurah's home! When Nurah's Eid gift doesn't get delivered on time, her older sister Sirru, plans to handmake a spectacular  Eid card and gift her sister something from her own art collection. Sirru's generosity and sacrifice helps to make sure Eid is still special for her little sister.

Rahimi fights the urge to complain about his food. He can’t stand eating the leftovers from people’s trash cans, but what other option for food is there for a raccoon? Through Dua and an attitude of gratitude, Rahimi the Raccoon embraces his creativity to make the most stunning food art that he can’t resist eating! This is the origin story for Chef Rahimi...

Mind Your Own Business: A Story about Barakah

AbdurRahman, an honest date seller, refuses to cheat when selling dates at the Market Festival hosted by King Ahmed. Amazing things unfold because of his sincerity to be fair and truthful.

Here's a fancy vocabulary word that just means being able to find solutions to people's disagreements. Prince Abdullah takes an important step, as taught from our Sunnah,  and addresses the anger in a situation at the royal palace . Here's a story about addressing anger so that we can get that out of the way in order to solve our conflicts!

A story about an Ostrich who overcomes a fixed mindset about himself. With the help of Haroon the Hippo, Ooby realizes that there's more to him than just his inability to fly!

Mayhem at The Masjid

Zayd & Zaynab have an eventful evening at the Masjid as they face adventure, unpleasantries and indulge in treats! When they meet a peculiar boy Omar, they realize that not everyone has the same understanding of the world as they do . A story that highlights the lens that children see out of, as they interact with those that look differently than them!
See More
Comments