Revolution 250 is a consortium of organizations in New England planning commemorations of the American Revolution's 250th anniversary. https://revolution250.org/Through this podcast you will meet many of the people involved in these commemorations, and learn about the people who brought about the Revolution--which began here. To support Revolution 250, visit https://www.masshist.org/rev250Theme Music: "Road to Boston" fifes: Doug Quigley, Peter Emerick; Drums: Dave Emerick
59 Episodes
Reverse

The Boston Massacre Trials with Bob Allison and Jonathan Lane

During the New Deal era there was a tremendous increase in public infrastructure.  As part of that story, the United States federal government hired artists to help decorate public spaces with works of art that spoke to the community in which these structures were built. Susan Brauner tells us about some of the artists and their work.

Who was Lafayette, and why was he so important?  Alan Hoffman, President of the American Friends of Lafayette who has translated Auguste Levasseur's Lafayette in America,.  an account of Lafayette's American tour in 1824-1825.  Find out why May 20 is Lafayette Day in Massachusetts, and what you can do to commemorate it.

Best remembered now for the eponymous beer that started the craft brewing industry, Samuel Adams was a great political leader in Massachusetts.  Yet this fervent author of editorial pieces in support of the rights and liberties of the people is little known today.  We learn more thanks to  Ira Stoll, author of Samuel Adams:  A Life.

The Battle of Chelsea Creek

The first time the patriots use artillery, the first time they sink a British ship, and the first time officers and men from different colonies stage a joint operation--the battle of Chelsea Creek, in what today are the cities of Chelsea and Revere, and the East Boston neighborhood, along an industrial waterway that still retains much of its 18th-century contour.  We hear from archaeologists Craig Brown, a PhD candidate at the University of Ediburgh,  and Victor Mastone, President of the Massachusetts Archaeology Society on this important, but little known May 1775 battle, and their work to map the site.

Benjamin Carp (Associate Professor and Daniel M. Lyons Chair of History at Brooklyn College) about the Great Fire of New York that occurred September 20 & 21, 1776, the Boston Tea Party and urban life during the Revolution.

African Americans in the American Revolution with Robert A. Bellinger

Professor Robert Bellinger on the lives and experiences of African Americans in the American Revolution, the presence of free and enslaved persons at Lexington and Concord and the connections between Massachusetts and Middleton Place in South Carolina.

With over 190,000 members nationwide, the Daughters of the American Revolution have been preserving America's heritage, awarding scholarships and supporting American civics and patriotism for more than 100 years.  Paula Renkas, State Regent for the Massachusetts Daughters of the American Revolution, tells us about their work in education, historic preservation, and fostering patriotism by supporting veterans.

The Martyr and the Traitor: Nathan Hale & Moses Dunbar, with Virginia DeJohn Anderson

Virginia DeJohn Anderson (University of Colorado) eminent scholar of life in Colonial America and most recently the author of The Martyr and the Traitor:  Nathan Hale, Moses Dunbar, and the American Revolution talks with us about these two men from Connecticut, both hanged in the first year of the War--Hale hanged by the British as a spy, Dunbar hanged in Connecticut as a loyalist.  What lead each one his particular path?  What do their stories tell us about the Revolution?

The Virginia Statute for Religious Freedom, passed by the Virginia legislature in 1786 is both a statement on religious conscience and the concept of the separation of church and state.  A conversation with John Ragosta, author of  Wellspring of Liberty ,   historian at the Robert H. Smith International Center for Jefferson Studies at Monticello, which maintains a great database of Jefferson materials,  on the topic of the Virginia Statute for Religious Freedom, and on why Jefferson and Patrick Henry were political foes.

Christina Proenza Coles new work, AMERICAN FOUNDERS reveals men and women of African descent as key protagonists in the story of American democracy. It chronicles how black people developed and defended New World settlements, undermined slavery, and championed freedom throughout the Americas from the 16th through the 20th century.Join Professor Bob Allison in conversation with the author in a discussion on the lives and legacies of the thousands of African-Americans who supported the cause of Independence and used their new-found policial and social power to further the cause of liberty down the generations. 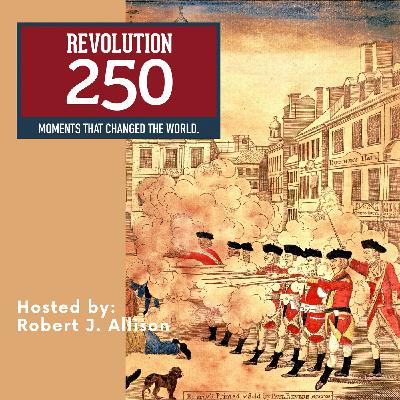 The Continental Congress, James Madison & the Revolutionaries with Jack Rakove

Jack Rakove. Pulitzer-prize winning historian and political scientist from Stanford, joins us for a discussion of  religious freedom, (see his book, Beyond Belief, Beyond Conscience) the Continental Congress, (the subject of his first book, The Beginnings of National Politics),  the Federalist papers, James Madison, John Dickinson and other Revolutionaries.

He was trained to cure the sick and aid the wounded. He wrote eloquently in the cause of liberty. He organized resistance to tyranny and oppression. He was a political leader admired and respected throughout the colonies. He volunteered to stand in the front lines, and died in the name of freedom, at the Battle of Bunker Hill.  The role of Dr. Joseph Warren in bringing about American Independence cannot be overstated.  We talk with Dr. Samuel Forman, about his book  Dr. Joseph Warren:  The Boston Tea Party, Bunker Hill, and the Birth of American Liberty.

When the King heard his forces had taken Ticonderoga in August 1777, he thought he had won the war.  What went wrong?  We talk with Kevin Weddle about his new book, The Compleat Victory, about the decisive battle of Saratoga.  How did the British strategy go so badly wrong--and why did the Americans win?  And what did the victory mean?  Kevin Weddle is an historian, but also a graduate of West Point with a 28-year career in the United States Army.  He now teaches military theory and strategy at the U.S. Army War College, and brings a lifetime of experience and a depth of research to bear in giving a new history of this important battle, and the characters involved--Burgoyne and Gates, Arnold and Gansevoort, and many others.

Originally built as Fort Carillon by the French army between 1755 - 1757, Fort Ticonderoga sits at a strategic junction of Lake Champlain, La Chute River, and Lake George.  British forces--including soldiers from Massachusetts--captured it in 1759, and then in May 1775 forces from Massachusetts and Connecticut, and from what is now Vermont took it from the British.  Henry Knox brought sixty tons of artillery from Ticonderoga to help General Washington drive the British from Boston.  Fort Ticonderoga is one of the great historical sites--and museums--in the country, and we talk with its curator, Matthew Keagle about its history and its collections.

The Fourteenth Colony: British West Florida in the Revolution with Mike Bunn

Historian Mike Bunn tells us about the tumultuous political scene in this borderland colony of West Florida, stretching from the Appalachicola River to the Mississippi, featuring  a host of bold and colorful characters on the fringes of the British and Spanish empires.  Find out more in this episode, and in Mike Bunn's book, The Fourteenth Colony:  The Forgotten Story of the Guf South During America's Revolutionary Era.

Nathaniel Philbrick on the Revolution

Nathaniel Philbrick talks about the impact of the American Revolution on American culture and history; the importance of George Washington as a political unifier;  the Battle of Bunker Hill as a seminal event on the road to American Independence;  and Moby Dick.

Thomas Jefferson & the University of Virginia with Andrew O'Shaughnessy

Why was education such a critical goal of America's revolutionaries?   We talk with Andrew J. O'Shaughnessy about his new book,  TheThe Illimitable Freedom of the Human Mind, about Thomas Jefferson's idea of a university. Andrew O'Shaughnessy teaches at the college Jefferson founed, and he is director of the Robert H. Smith International Center for Jefferson Studies.  His most recent book was The Men Who Lost America, on the British officers and politicians who lost the war.  His new book looks at a what a difference it made that the Americans won.
See More
Comments