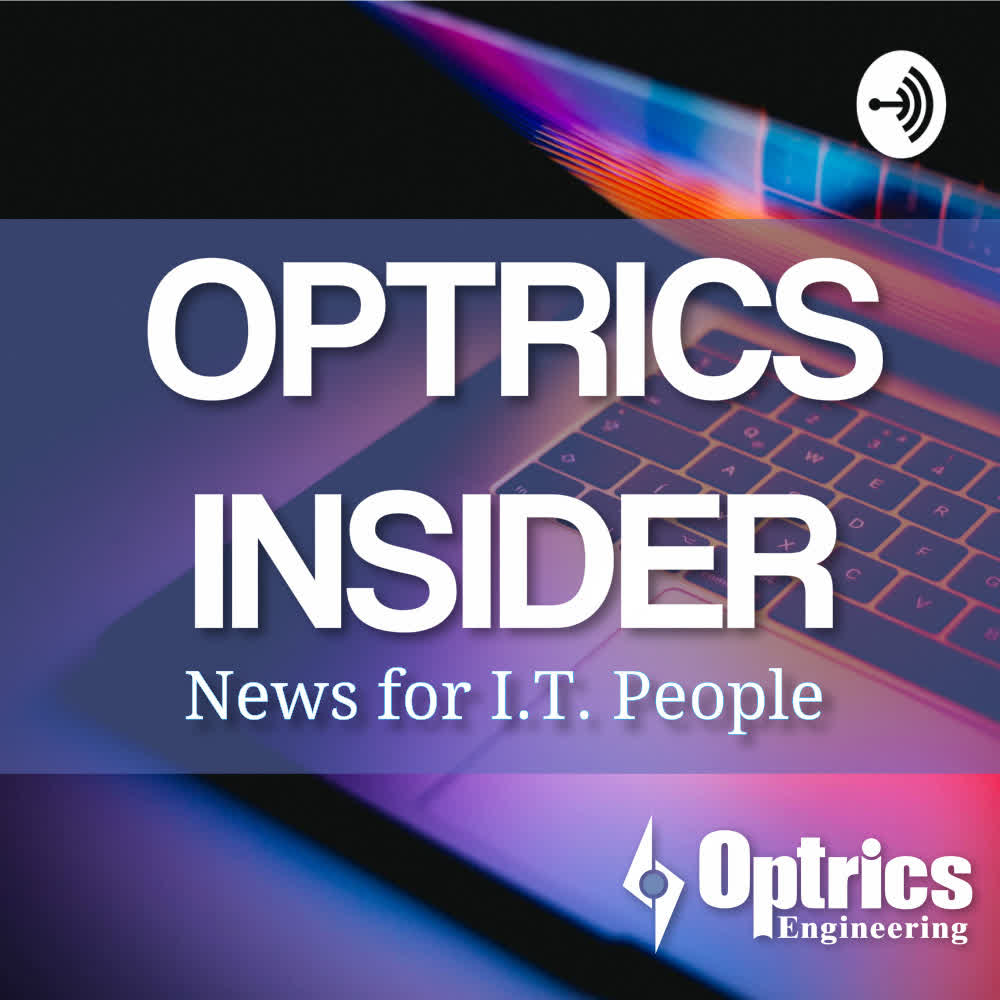 The Optrics Insider is a regular podcast, which highlights topics of interest to I.T. people, whether it be regarding the latest security vulnerabilities as well interesting (and funny) things that are happening in the industry. So if you are an IT manager, IT admin, CIO or interested in I.T. be sure to check out our podcast!
8 Episodes
Reverse

Join Scott Young and Shaun Sturby from Optrics Engineering as they discuss the FBI's warning about malicious banking apps, the "Internet of Troubles", IBM's cloud being down for 2 hours plus both Honda and the City of Knoxville being hit by malware.For more IT tips go to:www.OptricsInsider.comFBI Public Service Announcement - Increased Use of Mobile Banking Apps Could Lead to Exploitation:Increased Use of Mobile Banking Apps Could Lead to ExploitationLearn more about why it's important to update the firmware on Internet of Things (IoT) devices:An Internet of Trouble lies ahead as root certificates begin to expire en masse, warns security researcherLearn more about IBM's cloud being down for 2 hours:From off-prem to just off: IBM Cloud goes down planet-wide so hard even the status page didn't workIBM blames 'external' network provider, incorrect routing, traffic flood for its two-hour cloud outageLearn more about the malware that hit Honda:Honda confirms its network has been hit by cyberattackLearn more about the City of Knoxville and how they fell victim to a ransomware attack:Knoxville still quiet on ransomware attack and what's being done to fix it#OptricsInsider

Join Scott Young and Shaun Sturby from Optrics Engineering as they discuss Contact Tracing App spoofing, issues with the latest Windows 10 2004 Update (and why you should wait to update to it) and how an email pwned an IT help desk.For more IT tips go to:> https://www.OptricsInsider.comContact tracing app spoofing is already happening – and it's dangerously simple to do:> Contact-tracer spoofing is already happening – and it's dangerously simple to doLearn more about issues with the Windows 10 2004 May update:> Windows 10 2004: Microsoft warns of a new bug that makes connected displays go black> Microsoft Reveals Long List Of Windows 10 May 2020 Issues> Microsoft Puts Windows 10 May 2020 Update on Hold for Most DevicesLearn how an email pwned entire firm's helpdesk ticket system:> Weekly Update 194> Have I Been Pwned breach report email pwned entire firm's helldesk ticket system#OptricsInsider

Join Scott Young and Shaun Sturby from Optrics Engineering as they discuss the CIA owning Swiss crytography company Crypto AG, the $1 billion worth of Bitcoin that we were seized and the hacker who released 49,000 firewall passwords after hacking Fortinet's VPN.For more IT tips go to:https://www.OptricsInsider.comTimecodes:0:00 - Intro0:17 - Today's 3 topics0:40 - Topic 1: CIA & Swiss Crypto AG working together2:39 - Topic 2: $1 Billion Bitcoin seized from Silk Road4:27 - Topic 3: Hacker releases 49k Fortinet passwords6:40 - Closing remarksLearn more about the CIA & Crypto AG:https://www.theregister.com/2020/11/12/crypto_ag_swiss_parliament_reportLearn more about the seizure of $1 billion worth of Bitcoin:https://www.secplicity.org/2020/11/10/us-justice-department-makes-one-billion-dollar-drug-seizureLearn more about the hacker who posted 49,000 firewall passwords:https://www.bleepingcomputer.com/news/security/hacker-posts-exploits-for-over-49-000-vulnerable-fortinet-vpns

Join Scott Young and Shaun Sturby from Optrics Engineering as they discuss the ThunderSpy vulnerability for Thunderbolt connections, the possibility of working from home till the end of 2020 and into the new year plus a vulnerability that was discovered with QNAP network attached storage (NAS) devices.For more IT tips go to:https://www.OptricsInsider.comLearn more about ThunderSpy:https://thunderspy.io/https://community.spiceworks.com/topic/2272188-thunderspy-who-said-external-dma-was-a-good-ideaLearn more about working from home till the end of the 2020:https://community.spiceworks.com/topic/2272601-snap-twitter-employees-wfh-scam-site-boom-fb-avatars-spacex-simulator Learn more about the QNAP vulnerability:https://www.zdnet.com/article/hundreds-of-thousands-of-qnap-devices-vulnerable-to-remote-takeover-attacks/

Join Scott Young and Shaun Sturby from Optrics Engineering as they discuss a Microsoft Teams Vulnerability, Windows Bugs Report and COVID-19 Contact Tracing Apps. Plus as a bonus, Shaun will discuss something to consider when buying an IoT (Internet of Things) device for your home and their hidden costs.For more IT tips go to:https://www.OptricsInsider.com Learn more about the Microsoft Teams Vulnerability:https://www.theregister.co.uk/2020/04/27/microsoft_teams_gif_pwn_patch/ Learn more about the Windows Bugs Report:https://www.theregister.co.uk/2020/04/28/vulnerabilities_report_9_million/ Learn more about COVID-19 Contact tracing apps:https://isc.sans.edu/forums/diary/Privacy+Preserving+Protocols+to+Trace+Covid19+Exposure/26066/ IoT Buyer Beware:https://www.theregister.co.uk/2020/04/29/belkin_wemo_eol/

Join Scott Young and Shaun Sturby from Optrics Engineering as they discuss work from home PCs and patches, the notable increase in COVID-19 related spam emails as well as CMR (conventional magnetic recording) vs. SMR (shingled magnetic recording) hard drives and what you need to consider when using either for network attached storage (NAS) devices.  For more IT tips go to: www.OptricsInsider.comFor information on ManageEngine's Desktop Central go to: www.ManageEngine.ca/desktop-centralFor information on F-Secure go to: www.Optrics.com/partners/f-secureCMR vs. SMR Hard Drive Additional Reading: www.servethehome.com/surreptitiously-swapping-smr-into-hard-drives-must-endhttps://blocksandfiles.com/2020/04/14/wd-red-nas-drives-shingled-magnetic-recording

Join Scott Young and Shaun Sturby from Optrics Engineering as they discuss the top 3 work from home IT security issues that IT administrators and IT managers currently face as their employees transition to working remotely from home. For more IT tips go to: https://www.OptricsInsider.comResources mentioned in the interview: OpenDNS: www.OpenDNS.comCIRA D-Zone DNS Firewall: www.CIRA.ca/cybersecurity-services/canadian-alternative-opendnsWhatISMyIPAddress: https://WhatIsMyipAddress.comManageEngine Desktop Central: www.ManageEngine.ca/Desktop-CentralKnowBe4 Security Awareness Training: www.Optrics.com/KnowBe4
See More
Comments