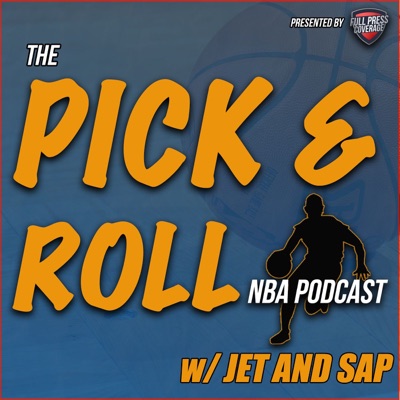 The Pick and Roll NBA Podcast w/ Jet and

Jet and Sap start getting everyone ready for the impending start of the 2021-2022 NBA season with their first set of three previews. They focus on the projected bottom 3 teams in the Eastern Conference: The Pistons, Magic, and Cavaliers, going over each squad and what to look for this upcoming season.

Jet and Sap start getting everyone ready for the impending start of the 2021-2022 NBA season with their first set of three previews. They focus on the projected bottom 3 teams in the Western Conference: The Thunder, Rockets, and T-Wolves, going over each squad and what to look for this upcoming season. They also touch on the latest with Ben Simmons and Kyrie Irving.

Jet and Sap debate the latest poll question on Sap's twitter. They argue who they would prefer of three potential big-name trade candidates, who would be the best fit on the Celtics, and where they predict each will end up.

Jet and Sap discuss at length the troublesome anti covid vaccine movement that has perforated the NBA, led in large part by Kyrie Irving. They use the great article published in Rolling Stone by reporter Matt Sullivan, as a jumping-off point for a lot of the discussion, and explain why they have no patience anymore for people unwilling to get vaccinated, or spreading lies about doing so.

Jet and Sap talk about the news that Ben Simmons won't report to 76ers training camp, and plans to hold out until they trade him. The guys talk about how and why the situation has gotten to this point, and how it has the potential to get even worse before a trade happens. Later, they talk about the retirement of JJ Redick, and the Lakers interesting plans for their starting lineup.

Jet and Sap go over Sap's latest article on fullpresscoverage.com, which compared several NBA stars to NFL stars. They debate the comparisons and make some new ones, highlighting players like LeBron James, Kevin Durant, Tom Brady, and Aaron Rodgers to name a few.

Jet and Sap talk about the new class inducted into the Basketball Hall of Fame over the weekend, including Paul Pierce, Chris Bosh, Chris Webber, Ben Wallace, Bill Russell, and others. They discuss the player's careers and the speeches they gave, which revealed fascinating aspects of each player's character and life story. The guys also give some behind-the-scenes radio talk from their years of working together.

Jet and Sap look at the latest signings from the Nets and the Lakers, and discuss whether or not they'll be impactful, and if fans are right to complain about ring chasing. Later, Sap offers up a fascinating trade involving Ben Simmons that is just so crazy it could work. To end the show, the guys talk about what they think the greatest ever draft class is, looking specifically at the 1984, 1996, and 2003 NBA drafts.

The Pick and Roll NBA Podcast W/ Jet and Sap - EP 117 - What Team Should Be on an NBA Version of Hard Knocks?

Jet and Sap discuss Sap's latest article on fullpresscoverage.com, where he suggests the NBA do a version of the NFL's "Hard Knocks" show on HBO. They talk about what team they would want to see and why.

Jet and Sap take a look at the latest out of Philadelphia, where the situation with Ben Simmons continues to get worse. The guys give their thoughts on what is going on and speculate on how everything will end up playing out. Later, they talk about the Lakers latest addition of Rajon Rondo, and what impact he might make an impact on the team.

Jet and Sap take a look at the Las Vegas projected win totals for the 2021-22 NBA season, give their opinions, and their favorite picks on the board.

Jet and Sap focus on the Boston Celtics and the recent contract extensions they've handed out to Marcus Smart, Robert Williams III, and Josh Richardson. Do these deals prevent them from being in play for Bradley Beal or another max player? Later they talk about the team retiring Kevin Garnett's number, and Paul Pierce trolling LeBron James.

Jet and Sap run down their respective lists of who they think are the current top ten players in the NBA, and explain their choices.

Jet and Sap get excited by the NBA announcing their 2021-22 schedule. They react to the big games, and which ones they're looking forward to the most. Later, they talk about some of the massive contract extensions just signed and debate whether the idea of a max contract is fair to players.

Jet and Sap share their thoughts on the huge contract extension signed by Kawhi Leonard to remain with the Clippers for the next four years. Later they talk about the Hall of Fame class of 2021 (which includes Paul Pierce) and who has been chosen to induct those players. They end the show discussing whether or not they believe Isaiah Thomas will be able to return to the NBA, and where he could end up, and a new career for former NBA champion JR Smith.

Jet and Sap are joined by author Pete Croatto of "From Hang Time to Prime Time: Business, Entertainment, and the Birth of the Modern-Day NBA". The free-wheeling discussion talks about how the NBA morphed into the highly successful media empire it is today. Topics include David Stern, Michael Jordan, the Lakers vs. Celtics rivalry and many more.

The Pick and Roll NBA Podcast W/ Jet and Sap - EP 109 - Is Dennis Schroder a Good Fit for the Celtics?

Jet and Sap discuss the Boston Celtics signing point guard Dennis Schroder to a one-year deal. They talk about how he fits on the team, and what they think his role should be. Later, the guys talk about NBA summer league action, specifically yesterday's showdown between the number 1 and number 2 picks in this years draft, Cade Cunningham and Jalen Green.

Jet and Sap check in on all the latest going on in the NBA offseason. They start by talking about Team USA men's and women's basketball both earning gold medals and the state of global competition. Later, they talk about NBA tampering investigations into the Miami Heat and Chicago Bulls in regards to their acquisitions of Kyle Lowry and Lonzo Ball respectively. The guys also talk about the lackluster offseason from the Celtics, and how it is becoming more and more apparent that the teams ownership group has become cheap.

The Pick and Roll NBA Podcast W/ Jet and Sap - EP 107 - Kemba is Back Home; Is Simmons Killing His Trade Value?

Jet and Sap react to the latest news from the NBA offseason starting off with Kemba Walker being bought out by the Thunder and joining his hometown New York Knicks. They wonder why the Thunder were willing to let Kemba go for just slight monetary savings, and the impact he'll have on the Knicks. Later they talk about the evolving trade negotiations with Ben Simmons, and how he's hurting his value even more. They end the show talking about a deleted tweet from LeBron James, and Team USA's gold medal hopes.
See More
Comments