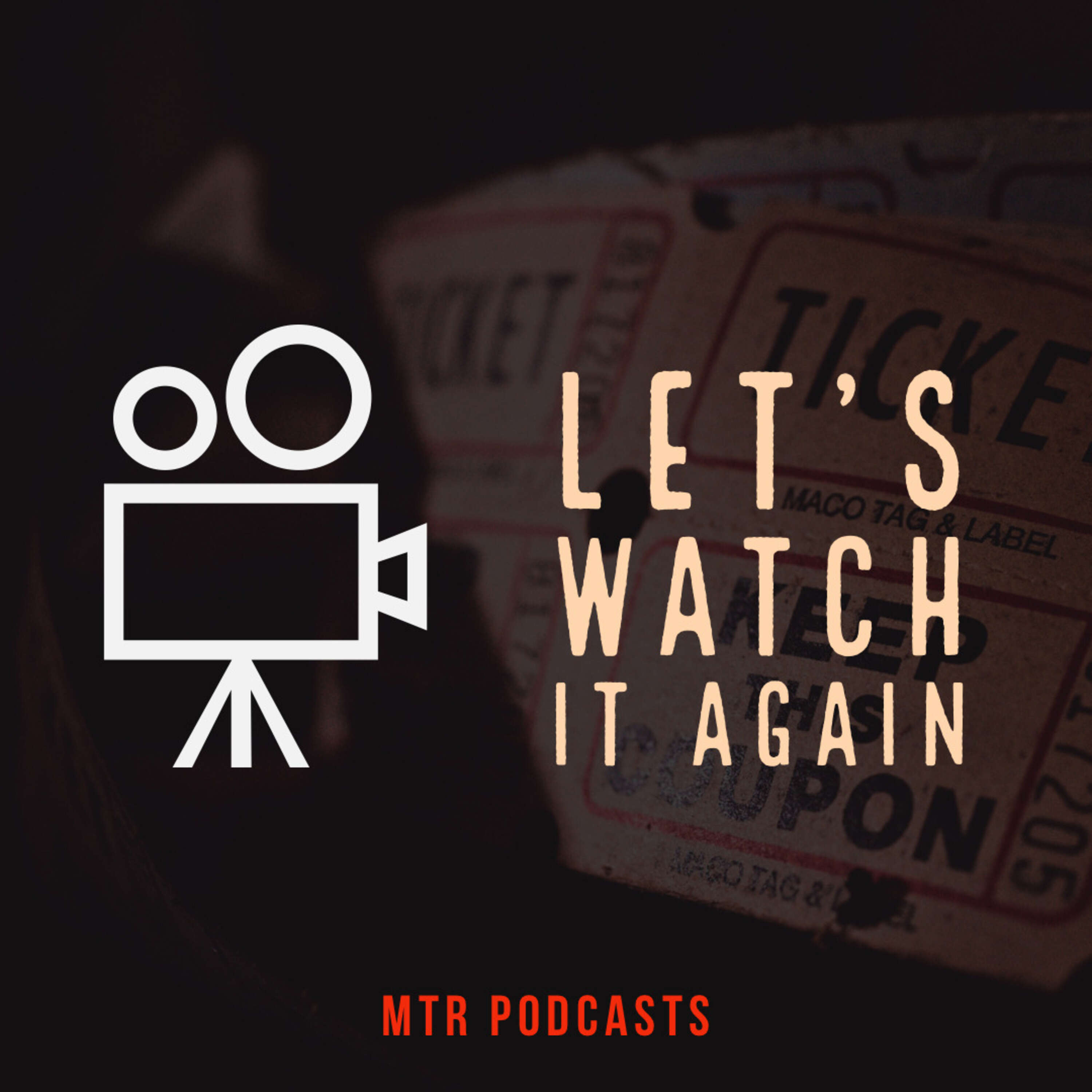 Love to talk movie trivia and get lost in the weeds in "what if's"? Then Let's Watch It Again for you. It is a movie review podcast from Rob Lee and friends discussing the oral history and trivia of their favorite movies.
40 Episodes
Reverse

In this review, Rob Lee welcomes podcaster Just Greg on to the podcast to discuss 1993's CB4.Let’s Watch It Again here:InstagramWebsiteCB4 Trailer6.2/10IMDb52%Rotten Tomatoes4.1/5Vudu76% GoogleSummaryAfter many failed attempts to establish themselves as rappers, Albert (Chris Rock), Euripedes (Allen Payne) and Otis (Deezer D) get their big break when nightclub owner Gusto (Charlie Murphy) is arrested. Albert assumes his name and criminal past, becoming MC Gusto, and the trio rises to fame by pretending to be recently released felons. As their fame increases, so do tensions within the group. When Gusto escapes from prison, he is furious at having his identity stolen and vows revenge.Release date: March 12, 1993 (USA)Director: Tamra DavisCastChris RockAllen PayneDeezer DCharlie MurphyKhandi AlexanderPhil HartmanChris Elliott

In this review, Rob Lee welcomes writer Kumari Adams on to the podcast to discuss 1992's Batman Returns.Let’s Watch It Again here:InstagramWebsiteBatman Returns Trailer7.1/10IMDb68%Metacritic81%Rotten Tomatoes80%Google UsersSummaryThe monstrous Penguin (Danny DeVito), who lives in the sewers beneath Gotham, joins up with wicked shock-headed businessman Max Shreck (Christopher Walken) to topple the Batman (Michael Keaton) once and for all. But when Shreck's timid assistant, Selina Kyle (Michelle Pfeiffer), finds out, and Shreck tries to kill her, she is transformed into the sexy Catwoman. She teams up with the Penguin and Shreck to destroy Batman, but sparks fly unexpectedly when she confronts the caped crusader.Release date: June 19, 1992 (USA)Director:Tim BurtonCastMichael KeatonDanny DeVitoMichelle PfeifferChristopher WalkenMichael GoughPat HingleMichael Murphy

In this The Fifth Element - Movie Review, Rob Lee welcomes veteran entertainment writer & Director of Events & Community Engagement for WTMD and WYPR Sam Sessa on to the podcast to discuss 1997's The Fifth Element.Let’s Watch It Again here:InstagramWebsiteThe Fifth Element Trailer7.6/10 IMDb71% Rotten Tomatoes3.7/5 LetterboxdSummaryIn the 23rd century, a New York City cabbie, Korben Dallas (Bruce Willis), finds the fate of the world in his hands when Leeloo (Milla Jovovich) falls into his cab. As the embodiment of the fifth element, Leeloo needs to combine with the other four to keep the approaching Great Evil from destroying the world. Together with Father Vito Cornelius (Ian Holm) and zany broadcaster Ruby Rhod (Chris Tucker), Dallas must race against time and the wicked industrialist Zorg (Gary Oldman) to save humanity.Release date: May 9, 1997Director:Luc BessonStarringBruce WillisGary OldmanMilla JovovichChris TuckerIan HolmCostume design: Jean Paul Gaultier

Rob Lee welcomes Dom Griffin on to the podcast to discuss the 1987's classic meat movie Predator.Let’s Watch It Again here:InstagramWebsitePredator Trailer7.8/10 IMDb80% Rotten Tomatoes46% MetacriticSummaryDutch (Arnold Schwarzenegger), a soldier of fortune, is hired by the U.S. government to secretly rescue a group of politicians trapped in Guatemala. But when Dutch and his team, which includes weapons expert Blain (Jesse Ventura) and CIA agent George (Carl Weathers), land in Central America, something is gravely wrong. After finding a string of dead bodies, the crew discovers they are being hunted by a brutal creature with superhuman strength and the ability to disappear into its surroundings.Release date:  June 11, 1993Director:John McTiernanStarring Arnold Schwarzenegger Carl WeathersWritersJim ThomasJohn Thomas

Rob Lee welcomes Isaiah Winters back on to the podcast to discuss the 2002 superhero film, Spider-Man.Let’s Watch It Again here:InstagramWebsiteSpider-Man Trailer7.4/10 IMDb90% Rotten Tomatoes73% Metacritic82% Google UsersSummary"Spider-Man" centers on student Peter Parker (Tobey Maguire) who, after being bitten by a genetically-altered spider, gains superhuman strength and the spider-like ability to cling to any surface. He vows to use his abilities to fight crime, coming to understand the words of his beloved Uncle Ben: "With great power comes great responsibility."Release date:  May 3, 2002Director:Sam RaimiStarring Tobey MaguireWillem DafoeKirsten DunstJames FrancoCliff RobertsonRosemary Harris

Rob Lee welcomes Greg back on to the podcast to discuss the 1980s cult-classic, Miami Connection.Let’s Watch It Again here:InstagramWebsiteMiami Connection Trailer5.6/10 IMDb 65% Rotten Tomatoes56 % Metacritic87% Google UsersSummaryThe year is 1987. Motorcycle ninjas tighten their grip on Florida's narcotics trade, viciously annihilating anyone who dares move in on their turf. Multi-national martial arts rock band Dragon Sound have had enough, and embark on a roundhouse wreck-wave of crime-crushing justice. When not chasing beach bunnies or performing their hit song "Against the Ninja," Mark (taekwondo master/inspirational speaker Y.K. Kim) and the boys are kicking and chopping at the drug world's smelliest underbelly. It'll take every ounce of their blood and courage, but Dragon Sound can't stop until they've completely destroyed the dealers, the drunk bikers, the kill-crazy ninjas, the middle-aged thugs, the "stupid cocaine"...and the entire MIAMI CONNECTION!!!Release date:  August 26, 1988Director:Woo-sang ParkY.K. Kim(reshoots)Starring Y.K. KimVincent HirschJoseph DiamandWritersWoo-sang Park(story)Y.K. Kim(story)Joseph Diamand(screenplay)

Rob Lee welcomes Isaiah Winters back on to the podcast to discuss the 1992 classic, Candyman. Let’s Watch It Again here:InstagramWebsiteCandyman (1992) Trailer6.7/10 IMDb77 % Rotten Tomatoes61 % Metacritic83 % Google UsersSummarySkeptical graduate student Helen Lyle  befriends Anne-Marie McCoy while researching superstitions in a housing project on Chicago's Near North Side. From Anne-Marie, Helen learns about the Candyman, a knife-wielding figure of urban legend that some of her neighbors believe to be responsible for a recent murder. After a mysterious man matching the Candyman's description begins stalking her, Helen comes to fear that the legend may be all too real.Release date:  October 16, 1992Director:Bernard RoseStarring Virginia MadsenTony ToddXander BerkeleyKasi LemmonsBox office:$25.8 millionScreenplayBernard RoseBased on "The Forbidden"by Clive BarkerCinematography Anthony B. RichmondMusic by Philip Glass

Rob Lee welcomes Liv Eutsler on to the podcast to discuss the 1996 classic, Scream. Wes Craven re-invented and revitalised the slasher-horror genre with this modern horror classic, which manages to be funny, clever and scary, as a fright-masked knife maniac stalks high-school students in middle-class suburbia. Craven is happy to provide both tension and self-parody as the body count mounts - but the victims aren't always the ones you'd expect.

The Transformers: The Movie (1986) | Let's Watch It Again Film Review!

Rob Lee & Ku review The Transformers: The Movie. The heroic Autobots defend their homeworld Cybertron from the evil Decepticons. Both factions are seething with anger, and that hatred has blinded them to a hideous menace headed their way.Be sure to check out other great episodes here.

Rob Lee welcomes Torin Rob Lee welcomes podcaster Just Greg on to the Let's Watch It Again podcast to discuss 2011's Drive.Driver is a skilled Hollywood stuntman who moonlights as a getaway driver for criminals. Though he projects an icy exterior, lately he's been warming up to a pretty neighbor named Irene and her young son, Benicio. When Irene's husband gets out of jail, he enlists Driver's help in a million-dollar heist. The job goes horribly wrong, and Driver must risk his life to protect Irene and Benicio from the vengeful masterminds behind the robbery.

Rob Lee welcomes podcaster Just Greg on to the Let's Watch It Again podcast to discuss the the 1991's Spike Lee Joint Jungle Fever.A married black lawyer named Flipper (Wesley Snipes) begins an affair with Angie (Annabella Sciorra), his white secretary. When the news is leaked through an acquaintance, Flipper's wife (Lonette McKee) kicks him out of the house. Flipper decides to begin courting his mistress, only to be greeted by disapproval from friends, family and even strangers. The relationship continues to be strained in a society not ready to accept it, and people are hurt during its inception.

Rob Lee welcomes radio personality Sam Sessa to the Let's Watch It Again podcast to discuss the 1991 classic, Terminator 2: Judgment Day.In this sequel set eleven years after "The Terminator," young John Connor (Edward Furlong), the key to civilization's victory over a future robot uprising, is the target of the shape-shifting T-1000 (Robert Patrick), a Terminator sent from the future to kill him. Another Terminator, the revamped T-800 (Arnold Schwarzenegger), has been sent back to protect the boy. As John and his mother (Linda Hamilton) go on the run with the T-800, the boy forms an unexpected bond with the robot.

Rob Lee welcomes Brooklyn based photographer Isaiah Winters on to the Let's Watch It Again podcast to discuss the 1991 classic, Boyz n the Hood.Tre (Cuba Gooding Jr.) is sent to live with his father, Furious Styles (Larry Fishburne), in tough South Central Los Angeles. Although his hard-nosed father instills proper values and respect in him, and his devout girlfriend Brandi (Nia Long) teaches him about faith, Tre's friends Doughboy (Ice Cube) and Ricky (Morris Chestnut) don't have the same kind of support and are drawn into the neighborhood's booming drug and gang culture, with increasingly tragic results.

Rob Lee welcomes Brooklyn based photographer Isaiah Winters on to the Let's Watch It Again podcast to discuss the 1986 classic, The Fly. When scientist Seth Brundle (Jeff Goldblum) completes his teleportation device, he decides to test its abilities on himself. Unbeknownst to him, a housefly slips in during the process, leading to a merger of man and insect. Initially, Brundle appears to have undergone a successful teleportation, but the fly's cells begin to take over his body. As he becomes increasingly fly-like, Brundle's girlfriend (Geena Davis) is horrified as the person she once loved deteriorates into a monster.

Rob Lee welcomes his brother, Rudy, on to the Let's Watch It Again podcast to discuss the 1996's classic, Space Jam. Swackhammer (Danny DeVito), an evil alien theme park owner, needs a new attraction at Moron Mountain. When his gang, the Nerdlucks, heads to Earth to kidnap Bugs Bunny (Billy West) and the Looney Tunes, Bugs challenges them to a basketball game to determine their fate. The aliens agree, but they steal the powers of NBA basketball players, including Larry Bird (Larry Bird) and Charles Barkley (Charles Barkley) -- so Bugs gets some help from superstar Michael Jordan (Michael Jordan).Be sure to check out other great episodes here.

Rob Lee welcomes Baltimore based photographer Schaun Champion on to the podcast to discuss the 1986 classic, Aliens. After floating in space for 57 years, Lt. Ripley's (Sigourney Weaver) shuttle is found by a deep space salvage team. Upon arriving at LV-426, the marines find only one survivor, a nine year old girl named Newt (Carrie Henn). But even these battle-hardened marines with all the latest weaponry are no match for the hundreds of aliens that have invaded the colony.

Rob Lee & Aaron Brown discuss the 1991 Keanu Reeves flick Point Break. In Los Angeles, California, a gang of bank robbers call themselves The Ex-Presidents. commit their crimes while wearing masks of ex-Presidents Reagan, Carter, Nixon, and Johnson. The F.B.I. believes that the members of the gang could be surfers, and send young Agent Johnny Utah undercover at the beach to mix with the surfers and gather information. Utah meets surfer Bodhi, and gets drawn into the lifestyle of his new friend.Be sure to check out other great episodes here.
See More
Comments