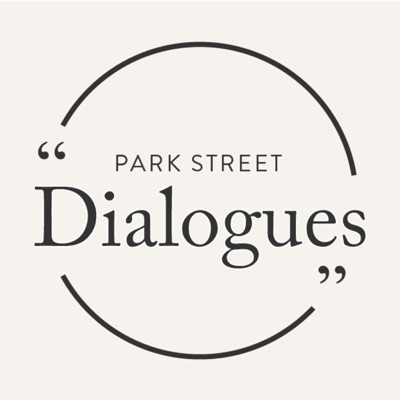 Hosted by Park Street Church's senior minister, Mark Booker, Park Street Dialogues is a series of conversations with the intent of connecting followers of Jesus in Boston and beyond. Mark talks with a diverse group of guests about their work and ministry in the city and their perspectives on the work of God in Boston: both in its opportunities and its challenges.
9 Episodes
Reverse

Arva Byron works at the Massachusetts Department of Children and Families, where she supports adolescents, and a Youth Minister at Roslindale Baptist Church. She and Mark discuss these vocations as well as her radio program, “Live with Arva J,” along the way considering what it means for followers of Jesus to be present in the lives of youth and all those around. Live with Arva J on Boston Praise Radio/TV Home for Little Wanderers Gordon College Massachusetts Department of Children and Families

Christian and Mary Grant are seeking to bring the gospel of Jesus to teenagers in the TNT neighborhood of Dorchester in Boston. They’re doing this through a partnership between The Boston Project and Young Life. In this conversation with Mark, they share how they came into this ministry, and they explain the ministry approach of both The Boston Project and Young Life. They share their perspectives on the hearts and needs of teenagers, and they reflect on how we, as the people of God, can best serve and reach young people with the gospel. The Boston Project Young Life Boston Young Life National/International Northpoint Bible College (formerly Zion Bible College)

Dana Baker leads the Boston Trauma Healing Collaborative, an effort to bring together different entities in Boston that are working on trauma related issues. Dana spent 18 years on the staff at Grace Chapel working as a pastor in intercultural ministry, and she is now working to equip churches in greater Boston to bring Christ-centered healing to those deeply wounded by trauma. She uses material and insight from both the Cory Johnson Program for Post-Traumatic Healing, which began at Roxbury Presbyterian Church, and the American Bible Society Trauma Healing Groups. In her conversation with Mark, Dana discusses what it means to love the city and how the church can handle trauma in a better way, so that we can be agents of God’s healing in the world. This topic is particularly timely as the church grapples with our place in healing the world as it struggles through a pandemic. Boston Trauma Healing Collaborative Cory Johnson Program for Post-Traumatic Healing American Bible Society Trauma Healing Groups Home for Good Louis D. Brown Peace InstituteContact Dana via email: dana at bostoncollaborative.org

David Wright is the Executive Director of BMA TenPoint, which is a merger of the Black Ministerial Alliance and the Boston Ten Point Coalition, as well as an adjunct Professor at Gordon Conwell Theological Seminary's Boston Campus, Assistant to the Pastor at Peoples Baptist Church, and a board member of several other organizations in the city. In his conversation with Mark, David reflects on the importance of the church being integrated into the community, and he issues a strong challenge to follow Jesus’s example as we participate in God’s mission together. David and Mark also discuss racial justice and other challenges facing the church in Boston.  BMA TenPoint Boston Globe article from 2014 on Busing in Boston, 40 years later Common Ground: A Turbulent Decade in the Lives of Three American Families by J.Anthony Lukas (1985) – winner of Pulitzer Prize Wikipedia article on 1999 shooting of Amadou Diallo in New York City  Gordon Conwell Boston Campus (CUME)

Betsy Cowan Neptune serves as the Chief of Economic Development for the Metropolitan Area Planning Council. In this role, she helps with the development and planning of communities and neighborhoods around greater Boston. In her conversation with Mark, Betsy talks about the challenges that our communities face, and she shares some great ideas for how Christians can engage with businesses in our neighborhoods and beyond. She and Mark also discuss the tension of partnering with others for the common good while knowing that our ultimate hope is in God and his coming future. Betsy helps to lead Thrive and Grow, a network of Christian entrepreneurs and business leaders in Boston, and she serves on the board of the Emmanuel Gospel Center. Metropolitan Area Planning Council Thrive and Grow Abundant Life Church London Institute for Contemporary Christianity (LICC) LICC Intro Video on Fruitfulness on the Frontline

Jua Robinson is the Executive Director of Boston Collaborative, an organization that connects networks of Christians to each other and to organizations that help Boston flourish. In this conversation with Mark, he shares his heart that Christians would become known for the key contributions we make to the flourishing of our city. He also tells the story of moving to Boston in 2006 to plant a multiethnic church, and he shares valuable lessons from that experience that speak to the heart of Christians discipleship.   Links: Boston Collaborative Boston Collaborative Feasibility Study and Research Findings (2019 report) Bethel AME Charles River Church Emmanuel Gospel Center Noah’s Ark Whitewater Rafting & Adventure Company

Bryan Wilkerson, senior pastor at Grace Chapel in Lexington, joins Mark Booker for a conversation about Boston culture, challenges in the life of the church, and ways that Boston churches can learn from and work with each other. Bryan tells the story of how he came to have a heart for the city and how that led to a regular gathering of pastors that came to be known as Greater Things for Greater Boston. Bryan also addresses the challenge of polarization in the church, the challenge of relating across generations, and the growing focus on justice among evangelicals.    Links: Grace Chapel Movement Day Christianity Today on Ravi Zacharias  The Dispatch on Ravi Zacharias with David French

Barry Kang, lead pastor and planter at Symphony Church in Boston, talks with Mark Booker about his call to pastoral ministry and his move to Boston in 2010 to plant a church that would reach college students. Barry and Mark also discuss how Symphony Church is seeking to serve the city and the challenges they face in doing so. In addition to leading Symphony Church, Barry gives leadership to Greater Things for Greater Boston, a network of Christian leaders who are working together to seek the good of the city. Links:  Why Cities Matter: To God, the Culture, and the Church by Stephen T. Um  Symphony Church  The Wednesday Pastors Prayer (7:30am-8:30am via Zoom): email Barry Kang (barrykang at gmail)parkstreetdialogues.org

PSD 00 | Mark Booker on His Vision for Park Street Dialogues

Mark explains his heart and vision for Park Street Dialogues in this introduction to the podcast.parkstreetdialogues.org
See More
Comments