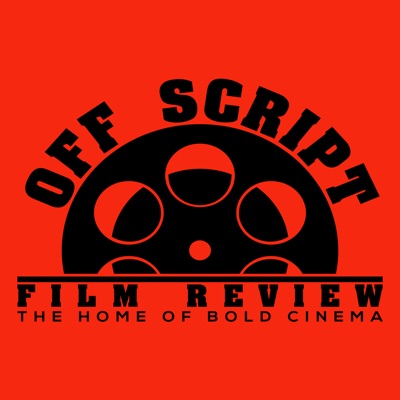 Welcome to Off Script, The Home of Bold Cinema! This weekly podcast features film news, in-depth reviews, and other colorful segments that delve into the culture, technology, and business of modern cinema. Join your hosts Dr. Andy Draper and Zach Lewis as they review, rant, and assess the cinema landscape of both yesterday and today. Subscribe Today!
154 Episodes
Reverse

'Candyman' returns to theaters in director Nia DaCosta's reimagining of the 1992 horror slasher that sees newcomer Yahya Abdul-Mateen II as a struggling artist that has to race against the clock after unknowingly summons an unspeakable evil that's been dormant in his community. Then, Adam Driver and Marion Cotillard sing their hearts out in Annette, a new musical exclusive to Amazon Prime from acclaimed French director Leos Carax that sees a controversial stand-up comedian and an esteemed Opera singer's marriage resulting in a young girl with the voice of an angel. Finally, Marvel's newest Avenger, 'Shang-Chi and the Legend of the Ten Rings' has finally arrived in theaters to a thunderous opening weekend at the Labor Day Box Office, but is all the hype really worth the watch? Movie news, movie reviews, and more every Tuesday on Off Script Film Review!

'Free Guy', the new live-action comedy starring Ryan Reynolds and Jodie Comer has finally hit theaters after a deluge of pandemic-related delays, but is this video-game adventure flick worth the price of admission? Also, John David Washington runs from the law in 'Beckett', a new Netflix Original Film hailing from Greece that's turning heads on streaming services this week - but maybe for the wrong reasons.

150 EPISODES OF OFF SCRIPT FILM REVIEW?! The guys reflect on reaching the 300 film milestone before diving into James Gunn's 'The Suicide Squad', the new film from the DC Universe that pits an unruly gang of superhero bad guys against a giant cosmic starfish. Then, Dev Patel shines in David Lowery's 'The Green Knight', a stunning cinematic spin on the Arthurian legend of Sir Gawain's quest for his honor in this new film from A24. Finally, M. Night Shyamalan's new film 'OLD' has been out in theaters for a couple of weeks now, but is it worth your time?

The Looney Tunes are back in action in 'Space Jam: A New Legacy', the new basketball-adventure romp that sees NBA All-Star Lebron James chasing his son through the Warner Brothers multiverse to stop a rogue artificial intelligence from taking over the world. Then, GIRLS GET IT DONE in 'Gunpowder Milkshake', a new direct-to-Netflix action film that features an all-star female cast (led by Karen Gillan and Lena Headey) about a secret mercenary-for-hire organization and the young woman who's determined to get out before it's too late.

Marvel soars back into theaters with 'Black Widow', the newest superhero film that pits Scarlett Johansson's Natasha Romanoff against the very evil that made her into the woman that would become an Avenger. Then, Bob Odenkirk strikes back in 'Nobody', an action thriller about a quiet father's quest for vengeance after two unsuspecting burglar rob the wrong house.

The Fast Franchise returns to theaters with 'F9: The Fast Saga', the latest entry in the series that sees Vin Diesel and his gang of miscreants facing off against John Cena as Dominic Toretto's evil twin brother. Then, Disney-Pixar makes waves with 'Luca', the animated story of a young mermaid's mysterious fascination with the human world and the best friends he'll need to get there. Movie news, movie reviews, and more every Tuesday on Off Script Film Review!

Episode 146: - The Conjuring TDDMDI & Those Who Wish Me Dead

In the latest film in the Conjuring saga, 'The Conjuring: The Devil Made Me Do It', Ed and Lorraine Warren return to the screen to unravel one of the most sinister cases of their careers when a young man claims demonic possession to be the reason behind a grisly homicide. Then, heroes fight fires in 'Those Who Wish Me Dead', the new film from Taylor Sheridan featuring Angelina Jolie as a Montana firefighter that's tasked with protecting a young boy from a team of ruthless mercenaries.

Musical Theater is alive and well in Lin Manuel Miranda's 'In The Heights', the new film from Crazy Rich Asians director Jon M. Chu that tells the tale of Usnavi, a young immigrant from the Dominican Republic that's struggling to find purpose in the colorful streets of Washington Heights. Also, we're awaited in Valhalla, shiny and chrome in Mad Max Fury Road: Black and Chrome Edition. The guys were lucky enough to catch a screening at the historic Texas Theatre in Dallas, so how's this 2015 action flick hold up - and how's the Texas Theatre doing?

How do you make a fun, family-friendly film about a woman who hates dogs? Disney believes the secret's in the casting in 'Cruella', the new live-action feature about the villain who tried to steal the original 101 Dalmatians. Also, John Krasinski's 'A Quiet Place: Part II' has audiences going back to the movies in droves, but has this sound-based horror gimmick run it's course?

The Saw franchise returns to theaters in 'Spiral', the beginnings of a new spinoff series starring Chris Rock and Samuel L. Jackson as a rookie cop and his retiree father hunting a serial killer that bears a striking resemblance to Jigsaw. Also, Zack Snyder's 'Army of the Dead' is officially available on Netflix, but is this Las Vegas zombie romp worth your time?

Jason Statham returns to theaters in Guy Ritchie's 'Wrath of Man', a remake of a 2004 French action-thriller about a mysterious man with a thirst for danger in the deadly world of Los Angeles armored-truck cash delivery. Then, the guys take a look back at 1992's Academy Award-winning film, 'Bram Stoker's Dracula', but how does this nightmare-fueled visual thrill ride hold up?

Episode 141: - Mitchells VS The Machines & Without Remorse

The new animated family feature from the team behind 'The Lego Movie' and 'Spider-Man: Into The Spider-Verse' is now available on Netflix! The guys review the artfully animated (and heavily technology driven) film 'The Mitchell's vs the Machines' before diving into Amazon Prime's new Tom Clancy film 'Without Remorse' and the problem with modern action films.

'Mortal Kombat' has arrived in theaters and on HBO Max, but does it hold up against the video games, and more importantly, the original movie from 1995? Also, the 2021 Oscars have officially arrived! Lots of winners, hardly any viewers, and we've got hot takes on the whole show! Movie news, movie reviews, and more every Tuesday on Off Script Film Review!

'Voyagers' is officially in theaters for returning moviegoers, but isn't it just 'Lord of the Flies' in Space? Also, we watched Hulu's 'The Clovehitch Killer' - a 2018 thriller that promises 'a refreshing return to the serial killer mystery', but if it's so great, why haven't we heard of it? Movie news, movie reviews, and more every Tuesday on Off Script Film Review!

The battle of the monsters comes crashing into theaters in 'Godzilla VS Kong', the ultimate monster mashup that's impressing fans both in theaters and on HBOMax, but does this epic clash of the titans share the same pitfalls as it's predecessors? Also, the new Netflix film 'Concrete Cowboy' is officially #2 on the platform in the US, so what's all the hype about? Movie news, movie reviews, and more on Off Script Film Review every Tuesday!

Episode 137: - Another Round & Kong Skull Island

Godzilla VS Kong is set to debut next week on HBO Max, but how's that most recent Kong movie hold up anyway? Also, a foreign film about alcoholism got nominated for an Oscar? What's happening in 'Another Round' that's worth all the buzz? Finally, new trailers, movie news, and more!

Zack Snyder's 'Justice League' has officially landed on HBO Max, but is this four-hour film worth your time - and is it any better than the theatrical cut? The guys dig into the changes from Joss Whedon's theatrical cut of the film in 2017 and the unbridled confidence in Snyder's commitment to his own artistic vision after reviewing the news and a couple of trailers that might be worth looking at.

Disney's new animated film 'Raya and the Last Dragon' is now available at home and in theaters, but is the $30 premium price tag worth the cost of in-home admission? Also, the streets of Los Angeles may not be quite the same as they were twenty years ago, so how's a noire classic like L.A. Confidential hold up in 2021? Finally, the 2021 Oscar Nominations are live and we've got hot takes about them!

Frances McDormand shines in 'Nomadland', the Golden-Globe-winning feature (now available on Hulu) about a melancholy housewife who's forced to hit the road after the untimely death of her husband. Also, 'Minari' is now available on VOD, but is this story of the American dream as told through the eyes of a newly-immigrated South Korean family worth the $20 price of admission? Finally, Alamo Drafthouse has filed for Chapter 11 bankruptcy, Disney+ is about to raise prices (again), and why isn't Cinemark running Raya and the Last Dragon?

Episode 133: - Judas and the Black Messiah & Earwig and the Witch

The Golden Globes have come and gone and Off Script is back to review 'Judas and the Black Messiah', the new Shaka King film that tells the story of Bill O'Neal, Black Panther and FBI Informant, and his involvement in the assassination of Black Panther Party Chairman Fred Hampton (currently available on HBO Max). Also, Studio Ghibli returns to the screen in 'Earwig and the Witch', an adaptation of a Dianna Wynne Jones story that follows Earwig, a young orphan, on her journey to becoming adopted by a malicious witch and her even scarier roommate. Finally, the Golden Globes happened, a new Superman reboot is in the works, and what's Paramount+ all about?
See More
Comments