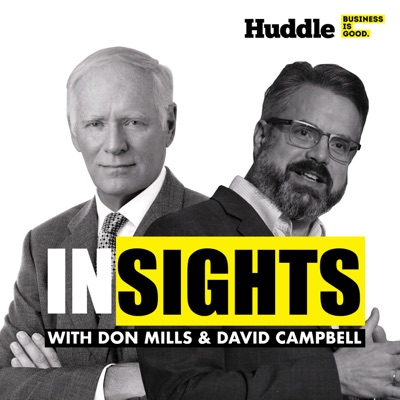 This new podcast combines the experiences of an economist, David Campbell and a social scientist, Don Mills, to explore the challenges and opportunities facing Atlantic Canada, to promote data-driven decision making among policymakers and to encourage a wider dialogue and debate leading to greater prosperity for the region. Expect to hear interviews with the top influencers, business leaders and decision-makers across Atlantic Canada to inform, educate and expand the conversations on the key issues facing the region.
36 Episodes
Reverse

If you haven’t heard of James Mullinger, it’s time to get acquainted. An immigrant from the UK who recently became a Canadian citizen, he is now a central figure in Atlantic Canadian cultural and media circles. James is a comedian, magazine editor, author, podcaster and, most of all, entrepreneur. He joins Don Mills and David Campbell to talk about his journey and how he became an accidental champion for Atlantic Canada.

35 podcasts. That's roughly 35 hours of conversations with business and thoughts leaders about Atlantic Canada's economic success stories and the challenges and opportunities ahead for the region.On this episode of the "Insights" podcast, Don Mills and David Campbell chat with Huddle editor Mark Leger about the people they've spoken to (a group that includes former Newfoundland finance minister Cathy Bennett, JDI co-CEO Jim Irving and Frank McKenna) and the issues they've discussed (from labour force development to immigration to energy development and innovation).

There are relatively few publicly held companies based in Atlantic Canada. In recent years, the region’s high-flying technology companies have typically grown to a point and then sold to a national or international firm. The region is also known for its intergenerational family-owned businesses. Should more firms look at listing on the public stock markets such as the Toronto Stock Exchange (TSX)?On the week's episode of the "Insights" podcast, Denis Larocque, President and CEO of Major Drilling and Andrew McLaughlin, the company’s VP of Legal Affairs and General Counsel, weigh in on the pros and cons of being a publicly-traded company. Moncton-based Major Drilling, one of the province’s few publicly traded firms, has used its ability to raise capital to become one of the world's largest drilling services companies. McLaughlin has written a persuasive report outlining the benefits and believes more publicly held companies would be good for the economy, which Huddle will be publishing later this week. He says New Brunswick has a lot of large family-owned businesses and a strong ecosystem of smaller businesses. "What seems to be missing is that middle layer that can expand into titan status. I'm talking about companies with $200-million in revenue that can grow up to the $1-billion mark," McLaughlin tells "Insights" co-host David Campbell. "It's this layer of companies that are the drivers of wealth creation and economic dynamism in other provinces. It's this realm where public companies can play a particularly prominent role."

This episode takes a close look at the challenges of fulfilling the promise of delivering high-speed internet to 100 percent of households in Atlantic Canada. News flash, it is not likely going to happen, at least using fibre lines to deliver the service. Our conversation with Lee Bragg of Halifax-based Eastlink provides a much clearer understanding of the challenges for companies that must remain competitive and governments that have promised affordable high-speed internet no matter where you live.

How To Improve The $4.3-Billion Atlantic Canadian Public Education System

In the latest episode of the "Insights" podcast, Don Mills and David Campbell discuss the quality of the education system in Atlantic Canada with Paul Bennett, one of Canada's leading experts on public education.

Addressing climate change is among the most important challenges facing the world today.  However, many questions remain about how it can be accomplished. How long will it take? Who will pay for the transition? What other energy sources will replace fossil fuels? What about nuclear, hydrogen and tidal energy? Neil Jacobsen from the Atlantica Centre for Energy is on the podcast this week to answer these questions.  He will also talk about the economic impact of the energy sector in Atlantic Canada and how we can continue to use energy as an economic development driver in the years ahead. If you want a primer on the energy transition from the perspective of Atlantic Canada, Jacobsen provides an ideal summary.

Charlene Johnson of the Newfoundland and Labrador Oil & Gas Industries Association (Noia) says don't give up on the oil and gas sector just yet. On the podcast this week, the Noia CEO explains why it's a critical part of global efforts to reach net-zero greenhouse gas emissions by 2050 and an important economic driver in Atlantic Canada going forward.

Melanie Nadeau On The Rise of the Blue Economy

The ocean sector in Canada is large and growing, currently representing $30-billion in GDP and employing more than 300,000 Canadians. This week, we look at this increasingly important sector of our economy, especially for Atlantic Canada, by looking at the work of COVE (the Centre for Ocean Ventures and Entrepreneurship). In conversation with COVE CEO Melanie Nadeau, we discuss the services and facilities provided by COVE to test new technologies, their incubation work with startups and their contribution to workforce development.

Tyson Johnson On How N.B. Can Secure Its Share Of 3.5 Million Worldwide Cybersecurity Jobs

Rory Francis Talks About How Bioscience Will Become A Billion-Dollar Sector In P.E.I.

What started 15 years ago as an idea to build a new industry around a few key assets has grown into an impressive biosciences cluster with 60 firms, 2,200 employees, and more than $300 million worth of exports in 2020. The PEI BioAlliance has been at the centre of the cluster’s development and its CEO Rory Francis talks about its successes and future potential. He also provides insight into how the model might be replicated with other nascent cluster development efforts across Atlantic Canada.

Brian Lee Crowley has little patience for governments that try to spend their way to economic prosperity. He also has no time for the view that Atlantic Canada is less prosperous because it has been mistreated by central Canada since Confederation.Crowley is the managing director and founder of the Macdonald-Laurier Institute. He's also the founder and former president of the Atlantic Institute for Market Studies, now part of the Fraser Institute. He joins Don and David to talk about how Atlantic Canada needs to take charge of its economic destiny and stop looking to Ottawa to solve its problems through equalization payments and regional aid programs.

David Dingwall on universities as engines of growth in Atlantic Canada

On this week's Huddle "Insights" podcast, Don Mills and David Campbell chat with David Dingwall, President and Vice-Chancellor of Cape Breton University, about the role of post-secondary education institutions as engines of economic development across Atlantic Canada.They discuss the direct economic impact of this sector and its increasingly important role as conduits for immigration, incubators of new entrepreneurs and catalysts for research and development.

Why many small Atlantic Canadian businesses are still struggling to survive

Louis-Philippe Gauthier, Senior Director, Legislative Affairs, Atlantic for the Canadian Federation of Independent Business (CFIB) joins hosts Don Mill and David Campbell on the Insights podcast to discuss the state of small business in Atlantic Canada and what they are looking for in the upcoming federal election.  Armed with the latest CFIB survey data, Gauthier weighs in on the need for continued government assistance for industries hit the hardest by Covid-19 and the challenges of vaccine mandates. They also discuss longer-term issues such as the state of entrepreneurship in Atlantic Canada and the pending retirement of 30,000 business owners across the region.

Atlantic Canada is a "have not" region but Niels Veldhuis of the Fraser Institute says it doesn't have to be that way. The president of the public policy research institute - or "think tank" as organizations like this are commonly known - tells Don Mills that the Atlantic provinces could follow the example of small provinces like Saskatchewan and create better investment climates that could encourage investment and keep its young people from moving to faster-growing, more economically successful regions.

Is ‘shocking’ N.S. election result a warning sign for the Liberals in Ottawa?

In this episode of the Insights Podcast, we have a lively panel discussion about the current federal election and the opportunities that it holds for economic development for Atlantic Canada. The stunning victory of the PCs in Nova Scotia raise some warning signs for the Liberal Government regarding the mood of Canadians at this stage of the pandemic. We discuss the outcome of the Nova Scotian election and its likely impacts on the province as well as look at the region's needs from the federal government going forward and outline specific opportunities that would help the region grow.

David Chaundy, President and CEO of the Atlantic Provinces Economic Council joins us this week on the Insights podcast to talk about the challenges and opportunities for the regional economy coming out of the Covid-19 pandemic. Chaundy has convinced our ageing population and its impact on the workforce is a top risk to our economic prosperity in the years ahead.They also discuss recent reports published by APEC on a range of topics including demographics, migration, urban/rural dynamics and capital investment.

Do We Have A Culture Of Dependence In Atlantic Canada?

In the fall, Alberta will hold a referendum on Canada’s Equalization system. The Alberta government wants leverage to force the federal government to negotiate a new formula that could significantly reduce the amount provided to Atlantic Canada each year.   Do provincial governments in Atlantic Canada rely too much on tax revenues generated elsewhere in the country? Do we suffer from a culture of dependency? Huddle editor Mark Leger hosts a conversation with Don and David about this important and controversial topic. In addition to the Equalization program, Mark, Don and David discuss Employment Insurance and other income and transfer programs. What role do things like geography, wages and immigration play? Don and David offer their insights and what they think can be done to address the challenges governments face with such programs.

Why Frank McKenna Wishes He Were Governing Today

Frank McKenna, Deputy Chair of TD Bank, joins Don and David on Insights this week to discuss economic development today compared to 25-30 years ago when he was Premier of New Brunswick. He weighs in on the importance of attracting industry as well as supporting homegrown firms. McKenna doesn’t pull any punches when talking about natural resources development, immigration and provincial fiscal sustainability.  He also provides good ideas on how to engage with the public in the social media age.  Not that he is thinking about running again but McKenna does say this would be a great time to be in politics.

On this week's episode of the Insights podcast, David Campbell chats with City of Moncton Mayor Dawn Arnold and City Manager Marc Landry. This is the third in their series of discussions with municipal leaders in Atlantic Canada about how we can build prosperous cities.  There is no doubt about the City of Moncton’s status as a successful city. It has been one of the fastest-growing larger cities in Canada over the past five years and the metropolitan region (including the City of Dieppe and Town of Riverview) has outpaced Halifax for gross domestic product (GDP) growth over the past 10 years. Mayor Dawn Arnold shares her views on the importance of immigration, arts and culture and the city’s bilingual population and Marc Landry stresses the importance of partnership and collaboration. We hope you enjoy this conversation!

Charlottetown is the fastest growing city in Atlantic Canada, having grown by nearly 10% since the last census. This growth has not been an accident and is based on good planning and strategy as well as close collaboration with the various public agencies involved in economic development including the Port Authority, the Greater Charlottetown Development Corporation and the Downtown Business Inc. Our conversation with former four-term Mayor Clifford Lee offers many insights for other communities wishing to emulate Charlottetown's success.
See More
Comments