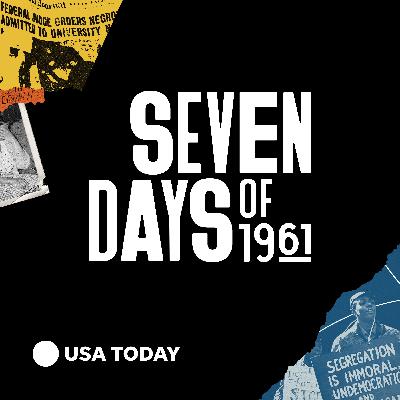 1,500 Black college students challenged police in 1961. The Supreme Court took their side.

In 1961, Black college students fought segregation. Four years later, their Supreme Court case secured First Amendment rights for future protesters. Sylvia Copper was a freshman at Southern University when she was suspended for her participation in the historic protest. She knew the risks involved but was steadfast in her decision. Sylvia met with producers on the VERY street where the protest took place. In “Seven Days of 1961,” we hear about the civil rights movement from those who lived it. Visit sevendaysof1961.usatoday.com to learn more about these pivotal events of 1961.

Joyce Barrett led a sit-in at age 22, helping to enact a ban on racial discrimination in Maryland

On Nov. 11, 1961, hundreds of Black and white college students from across the Northeast flocked to Baltimore and Annapolis to conduct sit-ins, aiming to draw attention to segregated restaurants along one of the nation’s most popular travel routes. Frustrated by what they saw as a tepid federal response to the discrimination common along U.S. Route 40 in Maryland, they fanned across the region, hopping from restaurant to restaurant, angering white patrons and needling business owners who refused change.  Joyce Barrett tells her story of being arrested during a sit-in at the Barnes' Drive-in in Annapolis, MD. The “Seven Days of 1961” podcast features stories of resistance, told by the people who lived it. Learn more about the heroic civil rights activists and the danger they faced at 7daysof1961.usatoday.com.

Brenda Travis was expelled from high school after serving time in jail for her bus station demonstration. Her Mississippi classmates walked out in support. The students wanted an end to racial violence, segregation and barriers to voting. Their activism helped rally young people across the state to challenge the system. Brenda Travis tells the story of seeing her classmates surround her, sharing the she felt then that she "wasn't alone." They marched to City Hall, where they were arrested by police carrying billy clubs. Episode transcript available here. The “Seven Days of 1961” podcast features stories of resistance, told by the people who lived it. Learn more about the heroic civil rights activists and the danger they faced at 7daysof1961.usatoday.com.

In 1961, Hank Thomas barely escaped death attempting to integrate interstate travel accommodations. The struggle galvanized civil rights activists across the South. The Freedom Ride movement almost ended in Alabama on May 14, 1961, when Hank Thomas and six other Riders nearly died on a bus that white supremacists set on fire in rural Alabama, where the Ku Klux Klan reigned. Podcast transcript available here Hank Thomas shares the story of how the Riders' journey descended into hours of vicious violence in Alabama. After Hank and his fellow Freedom Riders were viciously attacked, new Riders poured into the South for months, risking everything to force the country to face the hateful actions upholding unlawful, racist practices. The “Seven Days of 1961” podcast features stories of resistance, told by the people who lived it. Learn more about the heroic civil rights activists and the danger they faced at 7daysof1961.usatoday.com.

How nine college students challenged segregation at a public library

On March 27, 1961, nine students from Tougaloo College in Jackson, Mississippi risked violence, incarceration and their lives when they staged a “read-in”, at a whites-only public library. All nine were arrested. Ethel Sawyer Adolphe was just 20 years old when she and her fellow protesters became known as the Tougaloo Nine.  The “read-in” at the whites-only library in Jackson, Mississippi, inspired young people across the state to take action and galvanized a community around the fight for civil rights. Transcript available here. The “Seven Days of 1961” podcast features stories of resistance, told by the people who lived it and made history that year. Learn more about the heroic civil rights activists and the danger they faced at sevendaysof1961.usatoday.com.

At age 15, Kenneth Dious was ready to fight for the Black students integrating UGA

Kenneth Dious shares his story of the night he stood guard for a Black student who had just attended her first day of classes at the University of Georgia. He was only 15 years old when word spread in his hometown of Athens, Georgia, that a violent white mob had gathered outside the dorm room of Charlayne Hunter-Gault. Kenneth and three other Black men rushed to the crowd, ready to fight if needed. Episode Transcript available here. Read the story by Stephanie Allen to learn more about what students and community leaders did to integrate UGA. The “7 Days of 1961” podcast features stories of resistance, told by the people who lived it and made history that year. Learn more about the heroic civil rights activists and the danger they faced at 7daysof1961.usatoday.com.

They wanted to integrate their South Carolina town in 1961. The college students were sentenced to a chain gang.

David Williamson Jr. sat in the same seat where he was arrested sixty years ago, to tell us his experience of the day he and nine other men sat at a “whites-only” lunch counter. After being convicted for trespassing, nine of the men chose 30 days of hard labor on a chain gang instead of paying the $100 bail bond. The “jail, no bail” movement pushed back against paying fines for fighting segregation. It became a vital tactic of the Civil Rights movement. Episode Transcript available here. Read more about this moment and the impact it left in this story written by Wenei Philimon.   The “Seven Days of 1961” podcast features stories of resistance, told by the people who lived it and made history that year. Learn more about the heroic civil rights activists and the danger they faced at sevendaysof1961.usatoday.com.

The civil rights movement was nothing if not a violent struggle. People who fought for racial justice in 1961 take us back in history to the moments when they risked everything on the “Seven Days of 1961” podcast. New episodes drop every Tuesday starting Nov. 2nd. Read more stories in this project at Sevendaysof1961.usatoday.com.
See More
Comments