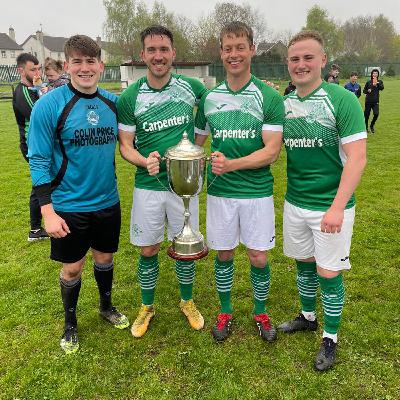 Does the club Master GAA fixture list need to be reviewed? A discussion with Paul Broderick.

Since retiring from inter-county football, Paul Broderick has helped New Oak Boys to an historic four titles in the one season including the Premier League  where they went through the season unbeaten. Barring injury, Paul could have played 40 soccer  games in the season. Unlike the local  GAA matches, the soccer fixture list is all but set in stone.  Paul says he would love to play more games with Tinryland.  He suggests GAA clubs have to come together and produce a Master's Fixture List which is set in stone and which suits both the footballers and the hurlers. 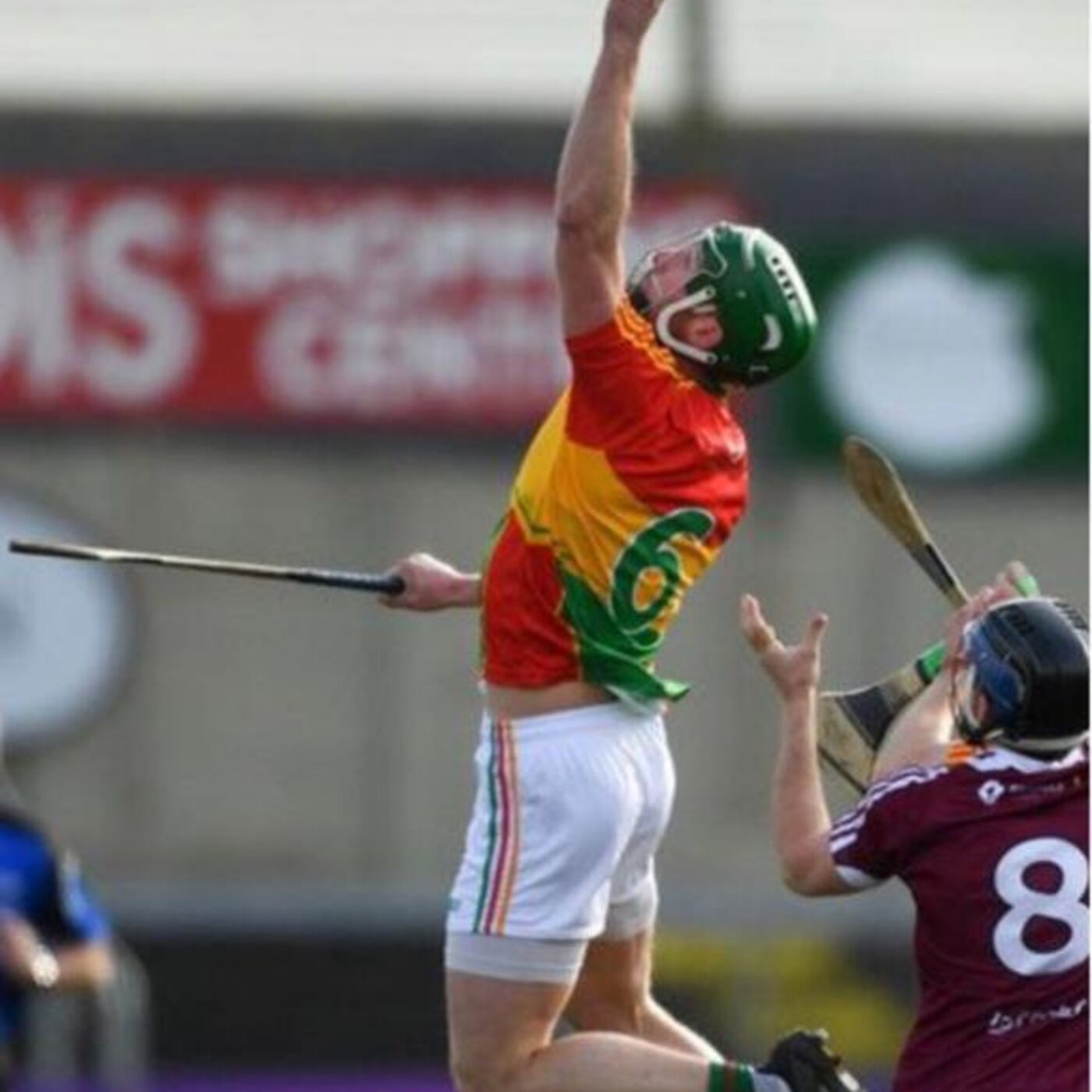 After Carlow's final Joe McDonagh Cup game against Westmeath in 2021, David English stepped down from inter-county hurling. He admits it was a tough decision but now he concentrates on club hurling. He has won Christy Ring and Joe McDonagh Cup finals in Croke Park with Carlow and has pocketed  minor and under 21 medals with Ballinkillen. He covets a senior title with Ballinkillen. Here, he reflects on his hurling career with club and county. 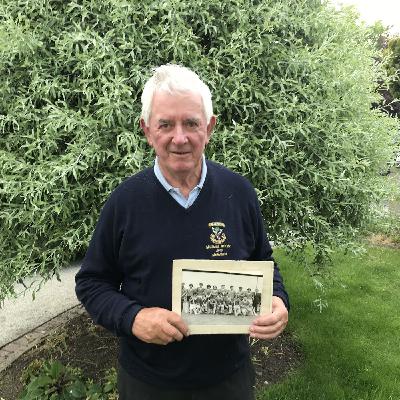 It was their one and only senior hurling championship win.  Palatine's success in 1972. Offaly man, Willie O'Rourke, played at centre-back. He was one of only two players who wore a helmet at the time. He recalls the people who made it happen. Players like JJ Canavan, Sean Treacy, Fran Mullins. Then there was what is now known as the management team. Tom Neville, Sean Hickson, Mick McAssey, Dick Gladney and many, many more. Willie pitted his wits against the great Carlow players including Moling Morrissey, Cyril Hughes, Paddy Quirke and Terry Byrne. In later years, he went on to become captain of Carlow Golf Club. That is a story in itself. Yet hurling will always be his first love. "If I try to tell you about a round of golf, you will probably fall asleep after three holes. You can listen to a whole game of hurling or football over a pint," he says. 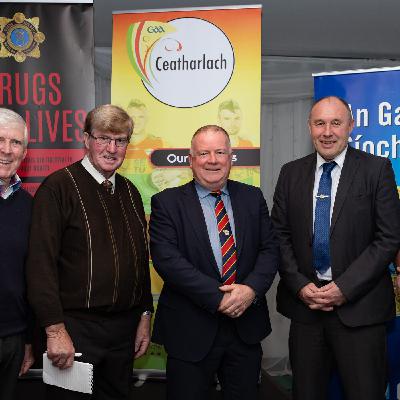 One night,  you are sitting at home watching television.  A knock comes to the door. The caller informs you that one of your family members has a drug debt and that it has not been paid. You are told the debt is now yours. Your life is shattered.  This is only one aspect of the abuse of drugs in society. Carlow GAA clubs are taking steps to  remind their members and particularly young people about the dangers of taking drugs and where that path can lead to. Here Peter McConnon, a member of the Crime Prevention Unit, in Carlow and Kilkenny and Carlow County Board Chairman, Jim Bolger, explain what the new Drugs Ruin Lives initiative is and what part committee members  can play to spread the message in their own clubs. 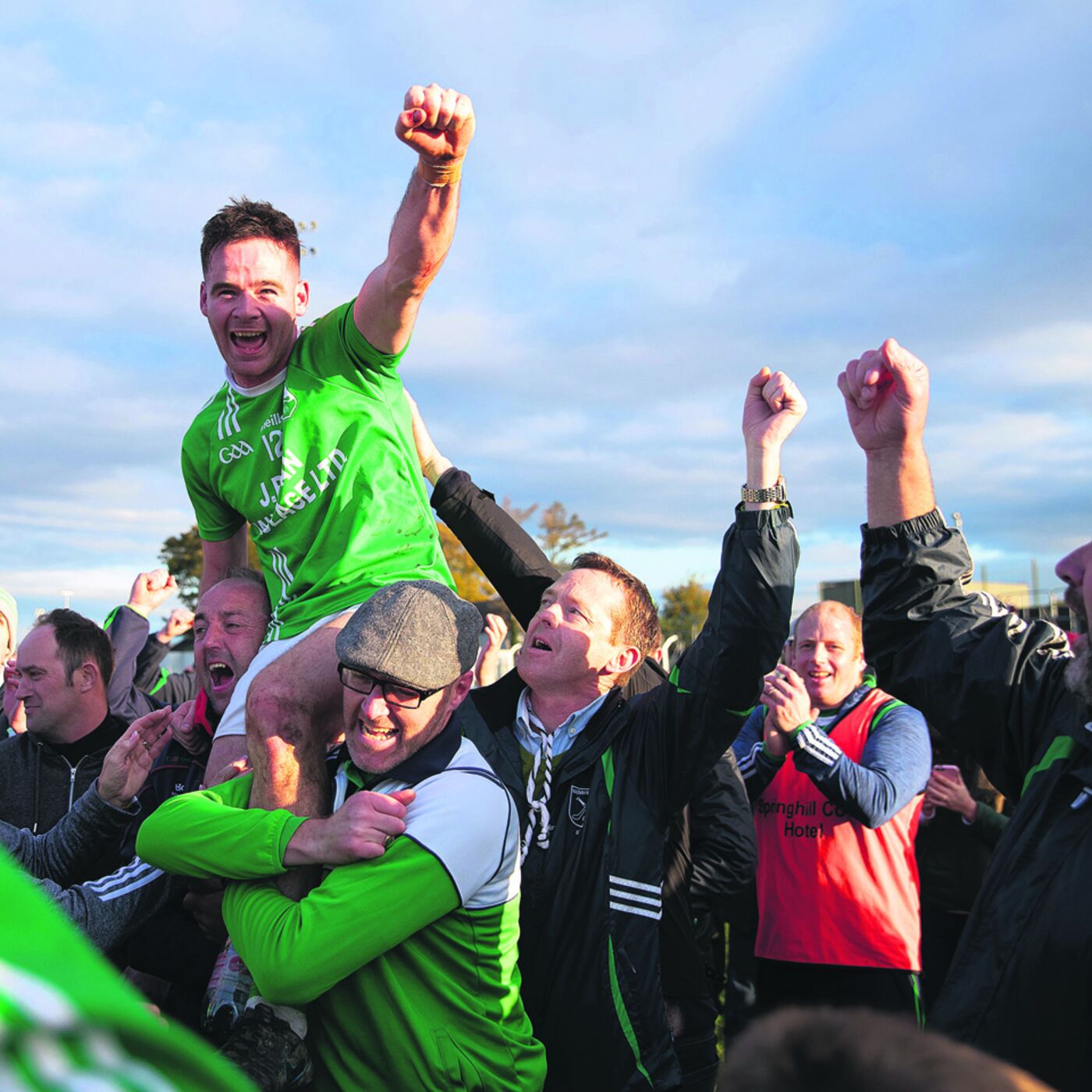 As Marty Kavanagh closes in  as Carlow's   leading inter county scorer of all time , Pat Coady, who currently holds the record says he is proud to be able to hand over to his own club man. Coady also speaks about his club's arch rivals,  Mt Leinster Rangers, who have set the bar high not just in  club hurling in the county but at national level too.  "We know the level of hurling Rangers are capable of."Coady recalls a golf game where another St Mullins club man, the great Liamy Walsh, wouldn't talk to him because of his refusal to take on a risk and reward shot.  Pat is a man who has been at the coalface in difficult times for club and county but who has also been there for the glory years as well. In the picture to go with this publication Coady is on the right as he and Pat Murphy chair Marty Mouse Kavanagh off the pitch after the 2019 senior hurling county final. 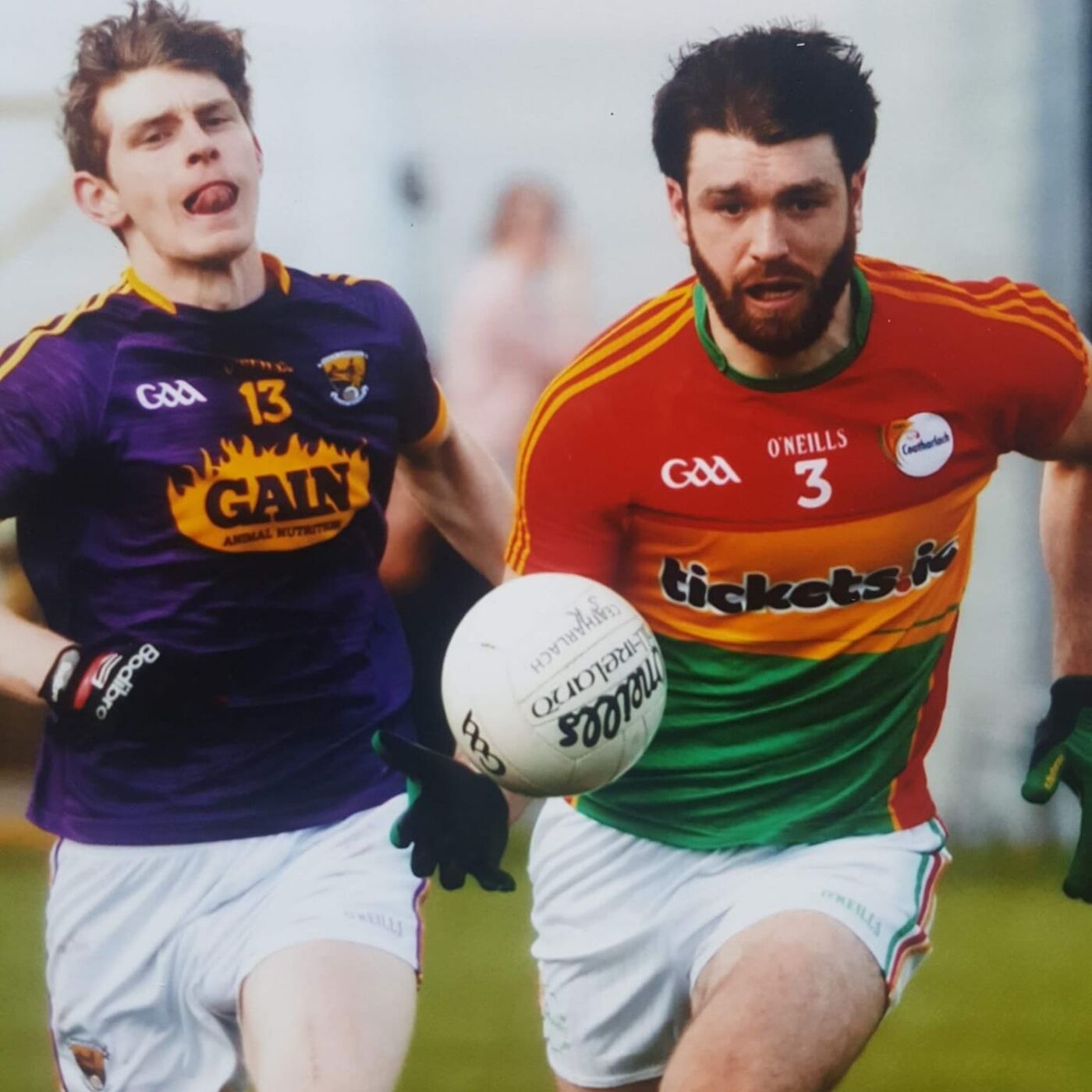 Shane Redmond enjoyed a long career at underage and senior inter-county football with Carlow. Before the start of the 2022 season he announced that he was retiring but would continue to play football with his club, Tinryland. There are many aspects of playing with Carlow that he continues to miss but the sacrifices he made and the sacrifices his family, his girlfriend and friends made to support him he is glad that is behind him. He recently attended a wedding in Mexico and was able to go without the worry of his obligations to the county team. With the Tailteann Cup draw to be made in a few days time, he says the competition is a good idea but is not so sure it will work in its current format. He suggests a structure which,  he says,  would be acceptable to the players and which might further motivate them. He says his club, Tinryland, have the potential to break the stranglehold Rathvilly and Éire Og have on club senior football in the county. 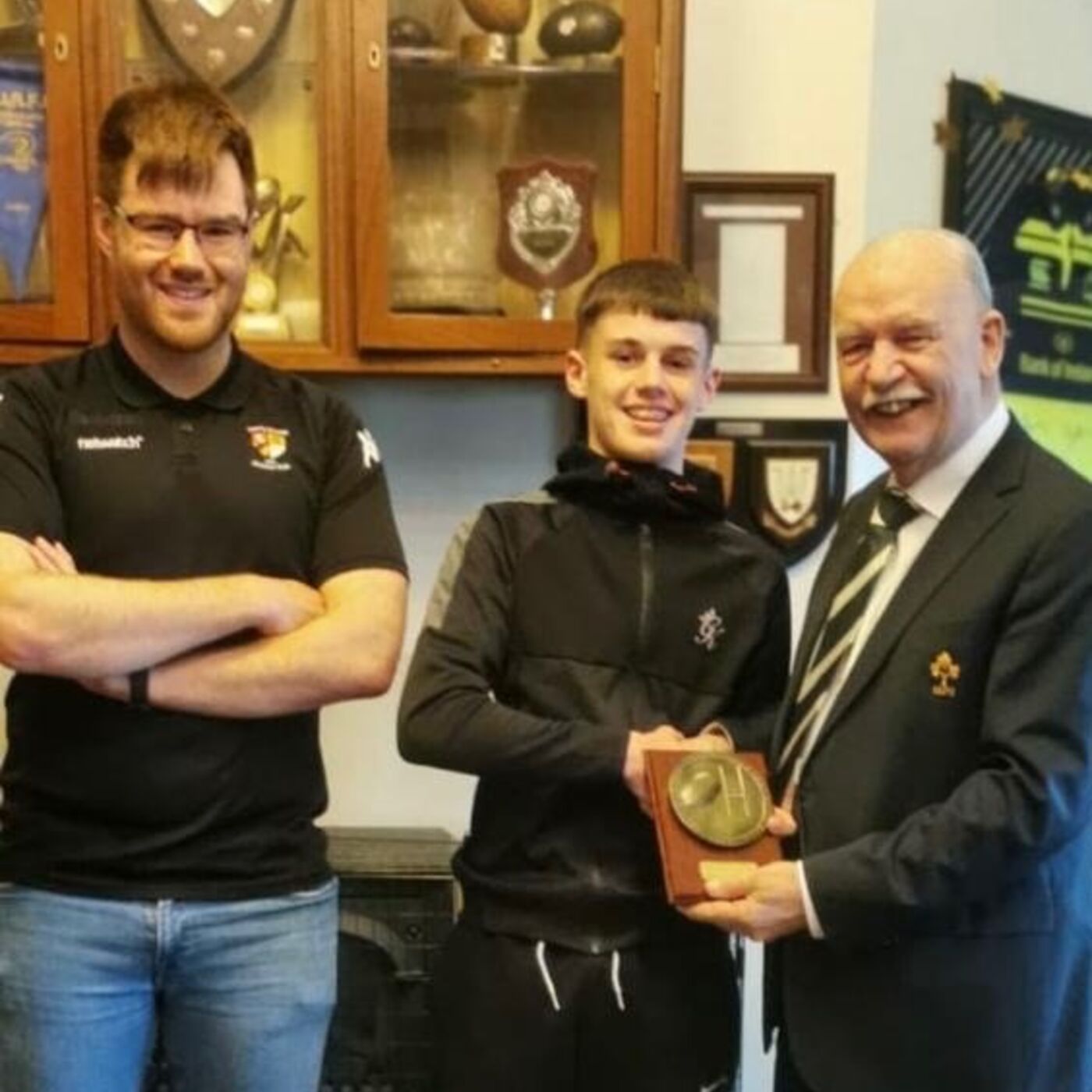 Recently, Des Kavanagh,  the President of the Irish Football Union, was back in his home club in Carlow where he had thrill of presenting his own grandson, Rian, with the under 14 Players Player of the Year. It was a moment to savour. Here, Des talks about some of the highs of his tenure in office. The triple crown in 2021, the emergence of ladies rugby in Ireland, the joy of getting to an Irish international rugby game when it looked, at one stage,  as if he might be the only President of the organisation who would not get to see a game live because of the pandemic. Then there is the Leinster Academy which is churning out quality players every season. There were lows too particularly when there were controversies in relation to the facilities for a ladies interprovincial fixture. The disappointment of coming so near to a men's Grand Slam coming so near but then so far. 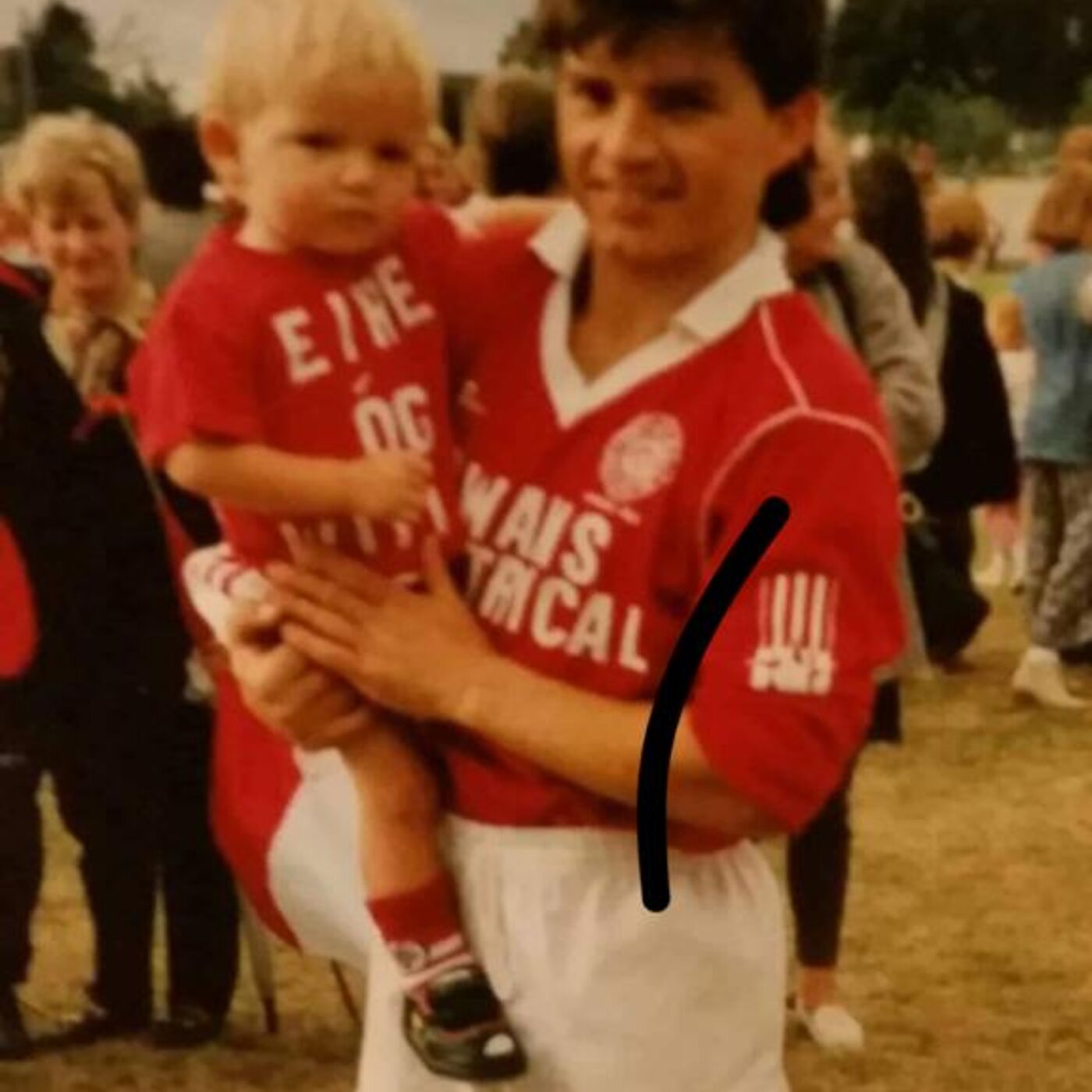 What Now for Carlow Football?

After recent heavy defeats for the minor, under 20 and senior Carlow footballers in the Leinster championship, former inter-county player, legendary Éire Og footballer and now a radio analyst, Willie Quinlan discusses what now for Carlow football. Going forward, he says a review on how underage squads are prepared and trained is a must  if Carlow is to close the gap which is developing between them and other counties. As a parent he discusses how he parks his disappointment when selection issues go against his sons and how he continues in his role as an unbiased radio analyst. 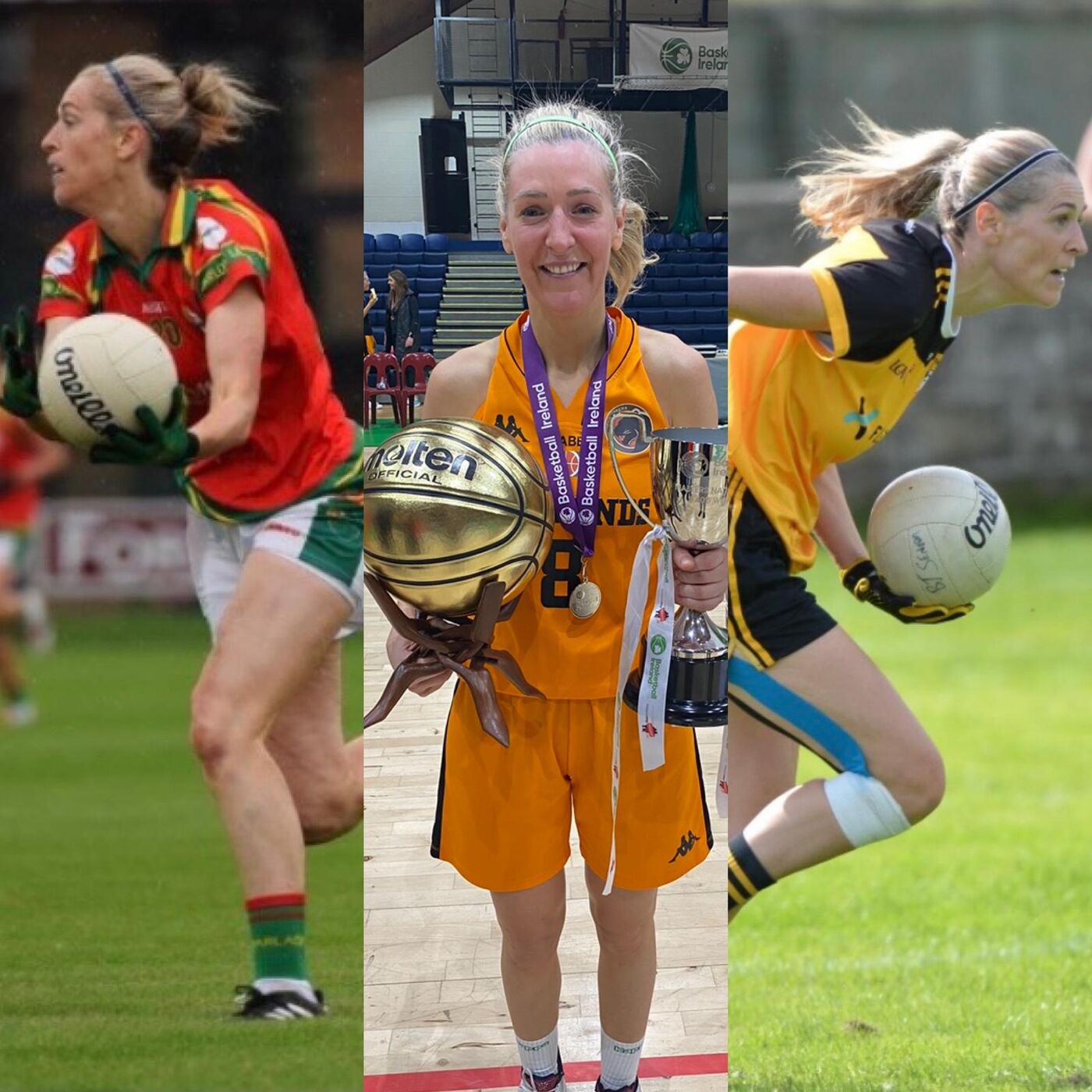 Deirdre Tomlinson and her love for football and basketball

Deirdre Tomlinson may have retired from inter-county football but she continues to play at club level where she helped Bennekerry-Tinryland regain the 2021 club title which Old Leighlin had held for the previous three years.Recently she took the Most Valuable Player award when  Midland Warriors won the Insuremyhouse.ie Masters Basketball National title at the Basketball Arena in Tallaght. Here she covers a range of topics as she recalls a journey to Derry with only 13 players for a football league game but stresses this could never happen now. She describes her cycling mad father as phenomenal who, like a good wine, only gets better with age. She and Richard Coady, the Carlow and Mount Leinster Rangers hurler have been an item for many years now and she admits neither of them would be behind the bush when it comes to discussing each others sporting performances. She looks forward to the amalgamation of the GAA, the LGFA and the camogie board but says there is still a long way to go with many pitfalls to be ironed out first. 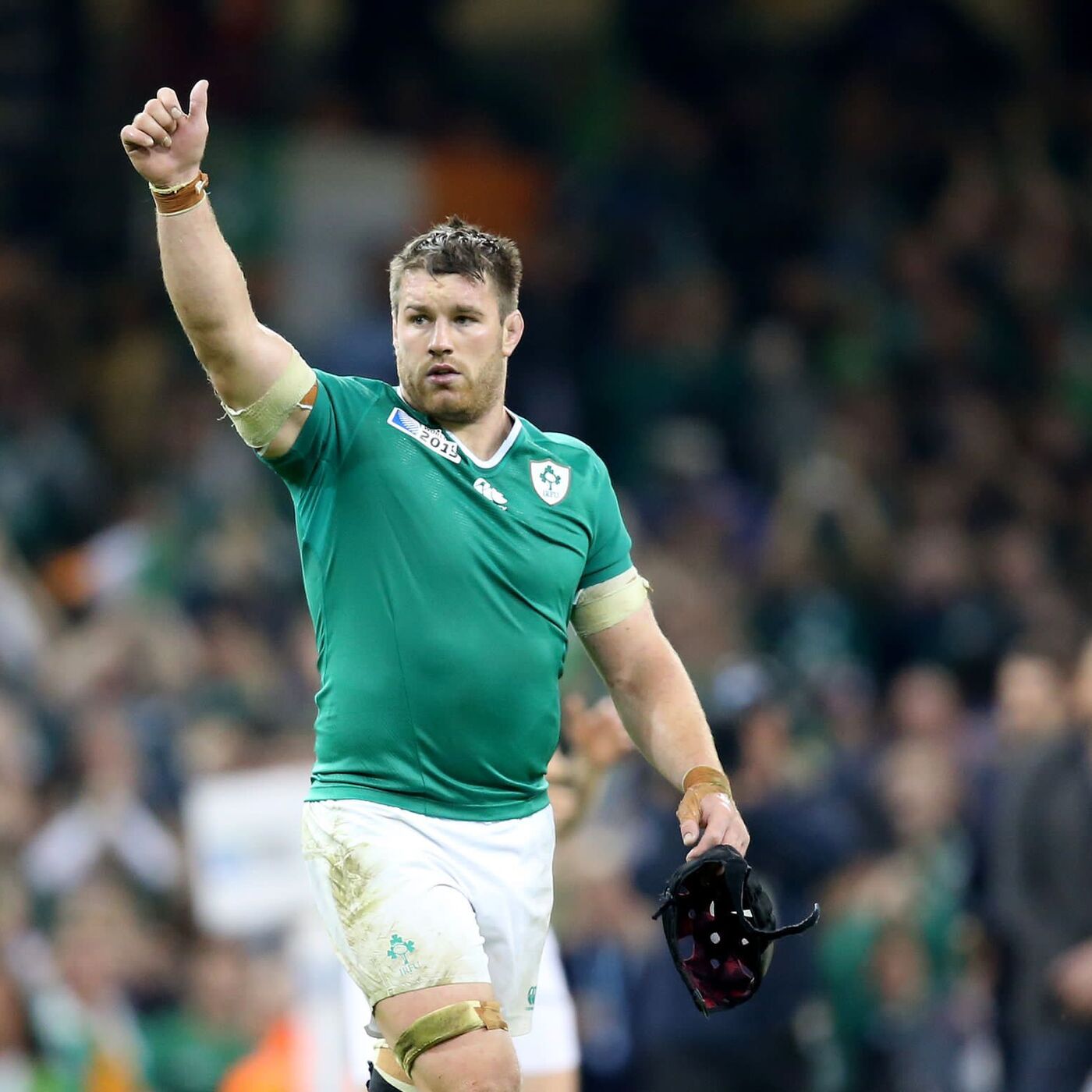 "He has the strength of his father and the kindness of his mother."Sean O'Brien announces his retirement and members  of his beloved Tullow RFC pay tributes to The Tullow Tank 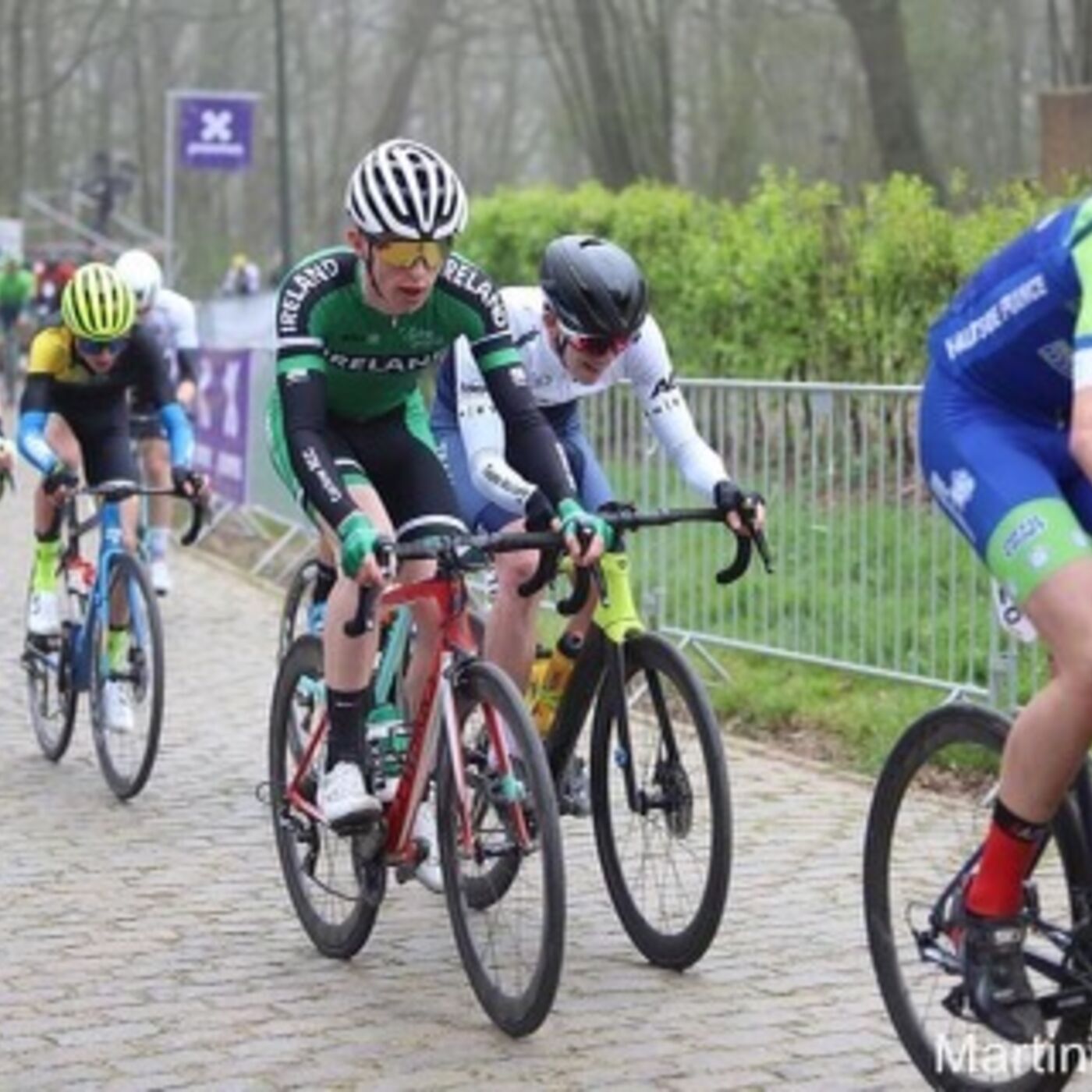 Cyclist, Con Scully, is heading to Europe this summer. Here, he reflects on his recent good performance in the junior Gent Wevelgem in Belgium.  He has another event next week in Belgium. Once his Leaving Certificate is done the Carlow teenager is heading back  to the continent.  These are exciting times for the 18 year old Carlow cyclist who is hoping to repay the faith, his sponsor,  Liam McLoughlin of McLoughlin Architecture has shown in him 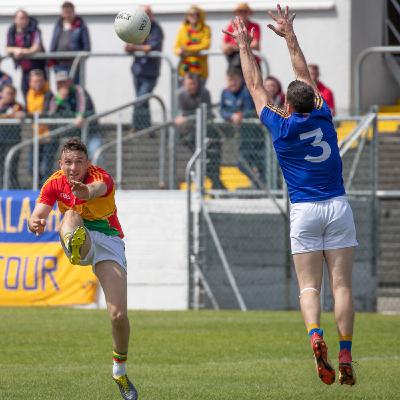 For love of club and county-Carlow footballer, Darragh Foley

This is Darragh Foley's 13 year playing with the Carlow senior footballers.  He has no medals to show for it but he has the memories-both good and not so good. Here he talks about the introduction of the Tailteann Cup, and what it means to play for one of the weaker counties. He airs his views on the GPA, the proposed amalgamation of the different strands of the GAA bodies,  club, family and why Jamie Clarke of Bagenalstown Gaels has impressed him so much this year. 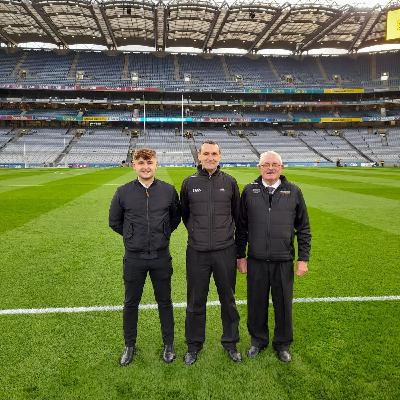 Patrick Salt Murphy talks about his love for refereeing, the lack of respect for referees which is driving new recruits away from the sport, the community aspect of referees and  gives his views on whether the GAA will have to consider giving referees more than just  their travel and meal expenses. 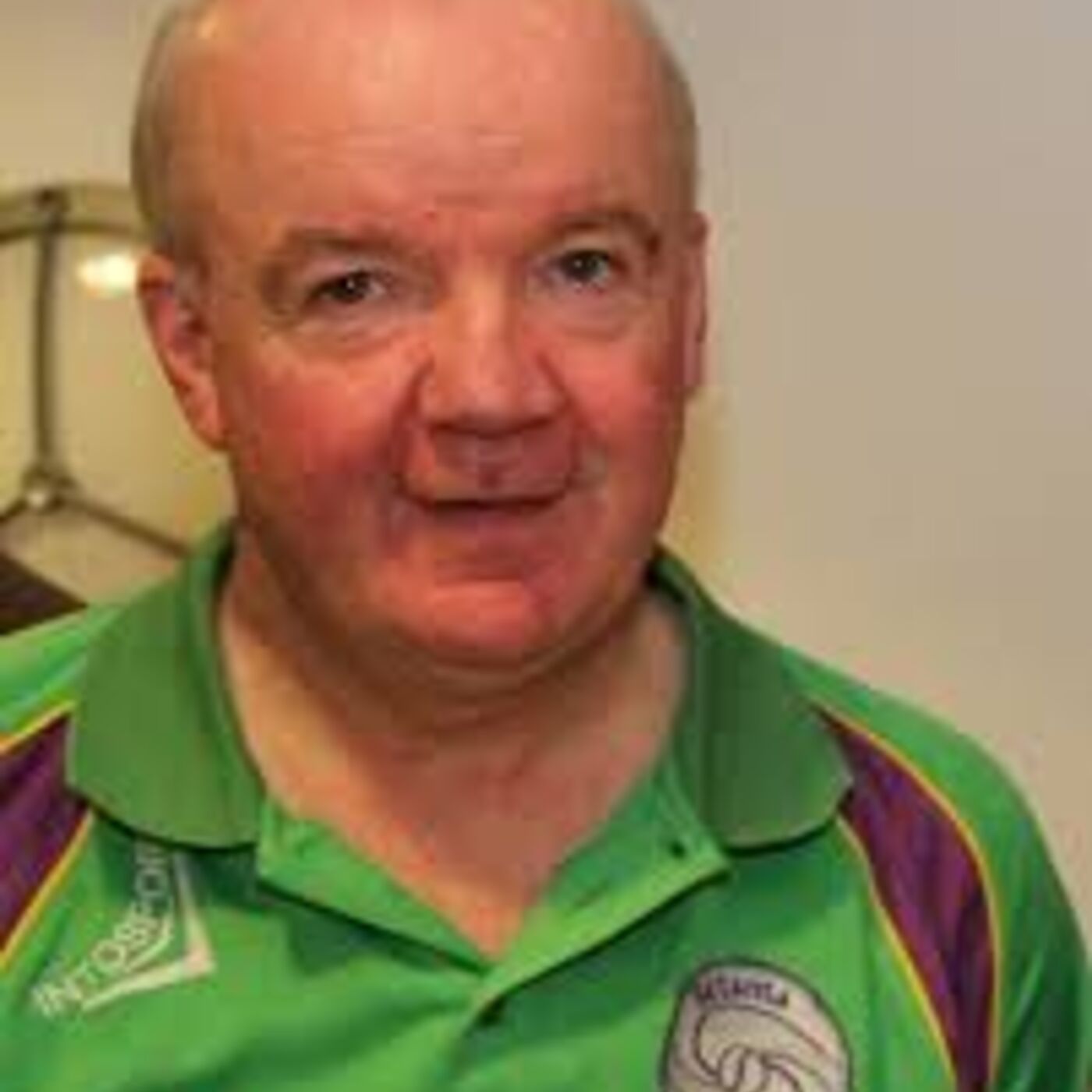 Sitting Down with Leo McGough

He has only missed two county finals since 1971. He actually scored the winning goal in one. Leo McGough, Carlow's Memory Man,  is passionate about his hurling and has been at hurling county finals in 28 counties. Here he talks about his love for the ancient game and his Clare background. For him, Marty Mouse Kavanagh is the greatest of all Carlow hurlers. He explains why he feels Setanta and Carlow Town  must join together for the good of the game.  He talks about a range of subjects including  synchronicity, Davy Fitzgerald, Mount Leinster Rangers and  why he gave up the demon drink. 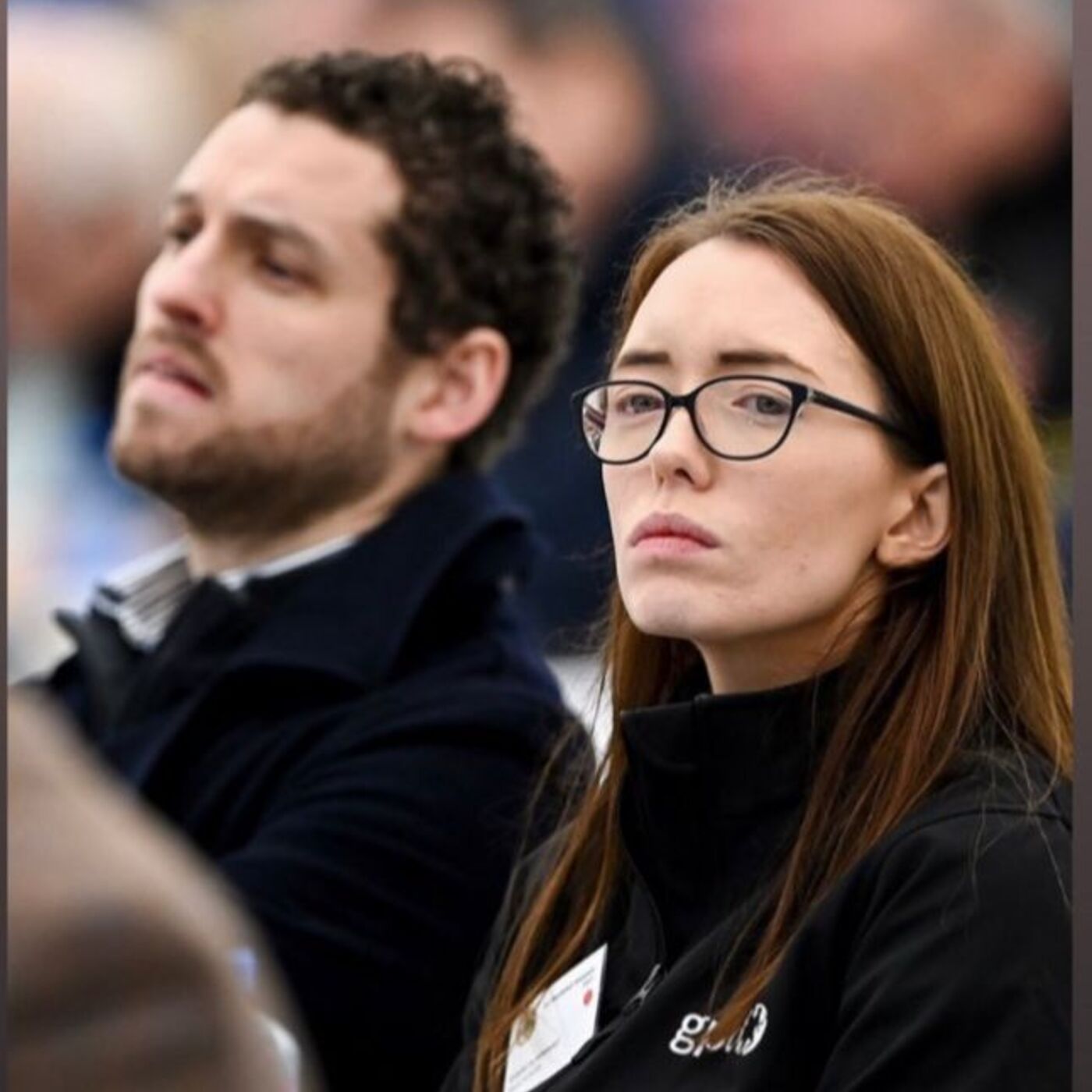 Maria Kinsella, co-chairperson of the Gaelic Players Association, talks about the moves to unify the GAA, the Ladies Gaelic Football Association (LGFA), the Camogie Association and other strands of the GAA into one organisation. 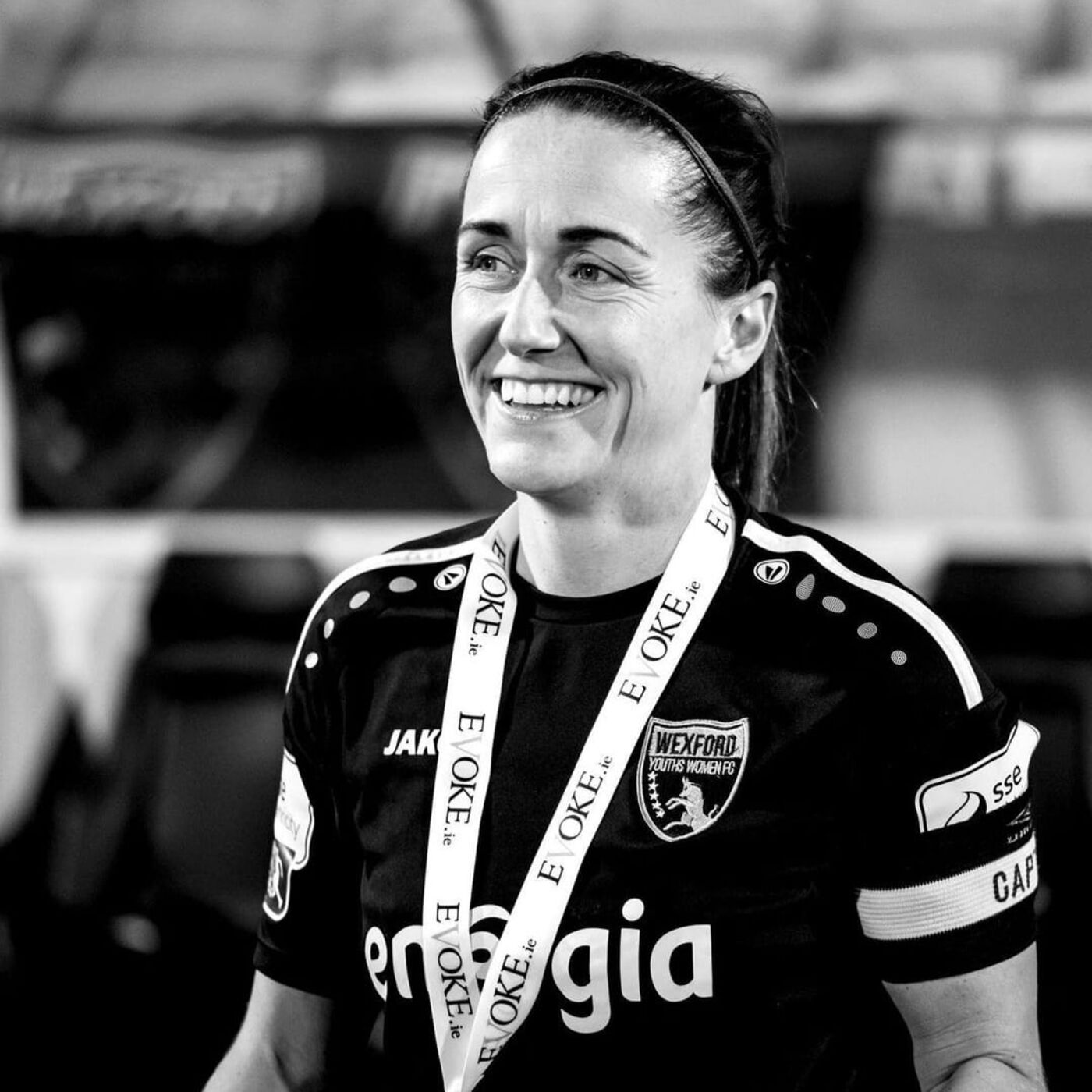 She has been described as the best ever club player to have played in the National League. Kylie Murphy reflects on the positive changes which have taken place in Irish women's club soccer over the last ten years. She is also confident the Irish ladies soccer team can qualify for their first major championship. 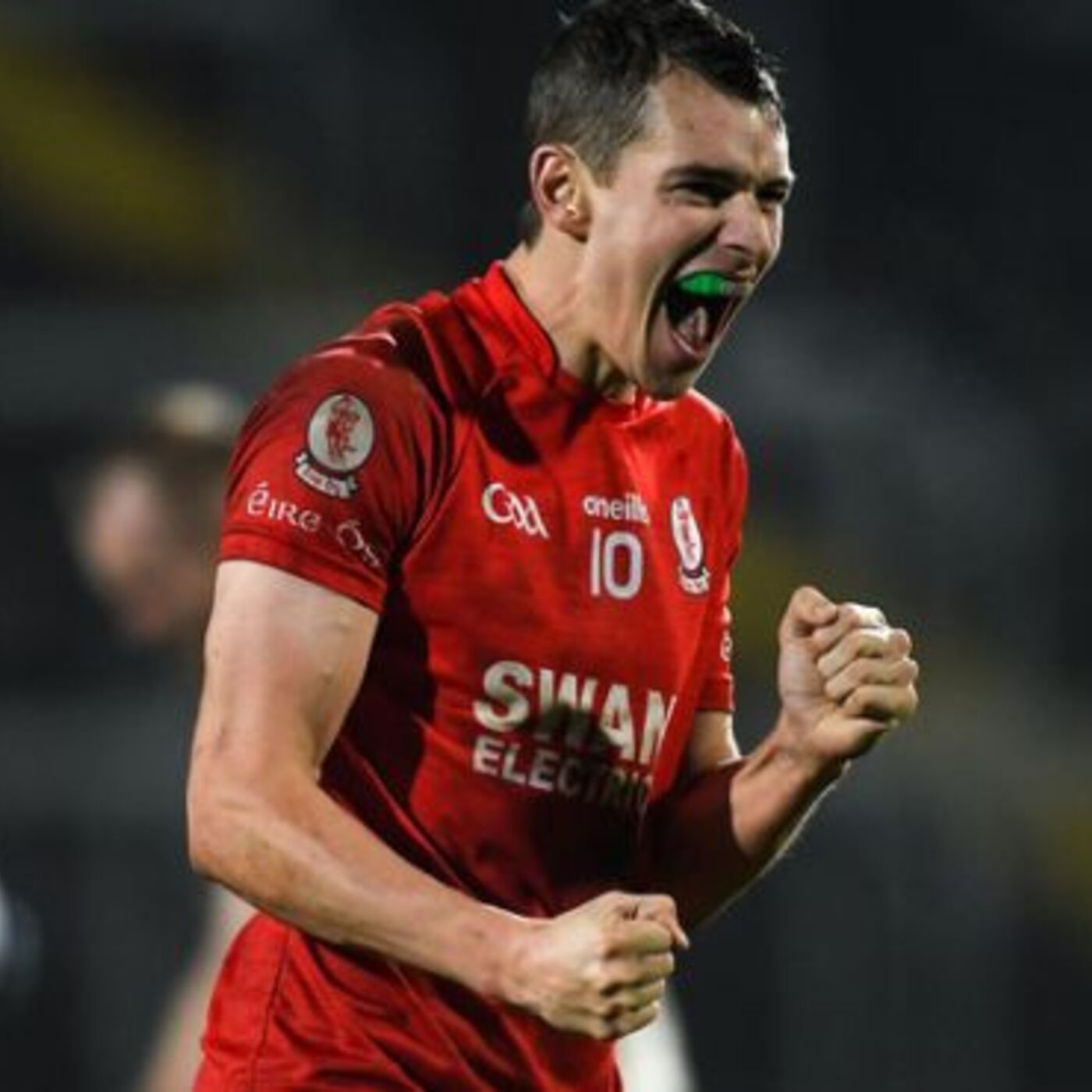 His job is his hobby. His hobby is his job. Carlow  GAA Games Development Manager, Sean Gannon, discusses the problems small counties face as they try to compete against the bigger counties with superior playing numbers. The Carlow inter-county player explains why the national football league is the most important   competition for him. He captained Éire Og to five senior crowns out of seven but  reflects on his disappointment of not achieving five-in-a-row  county titles with the club in 2021. 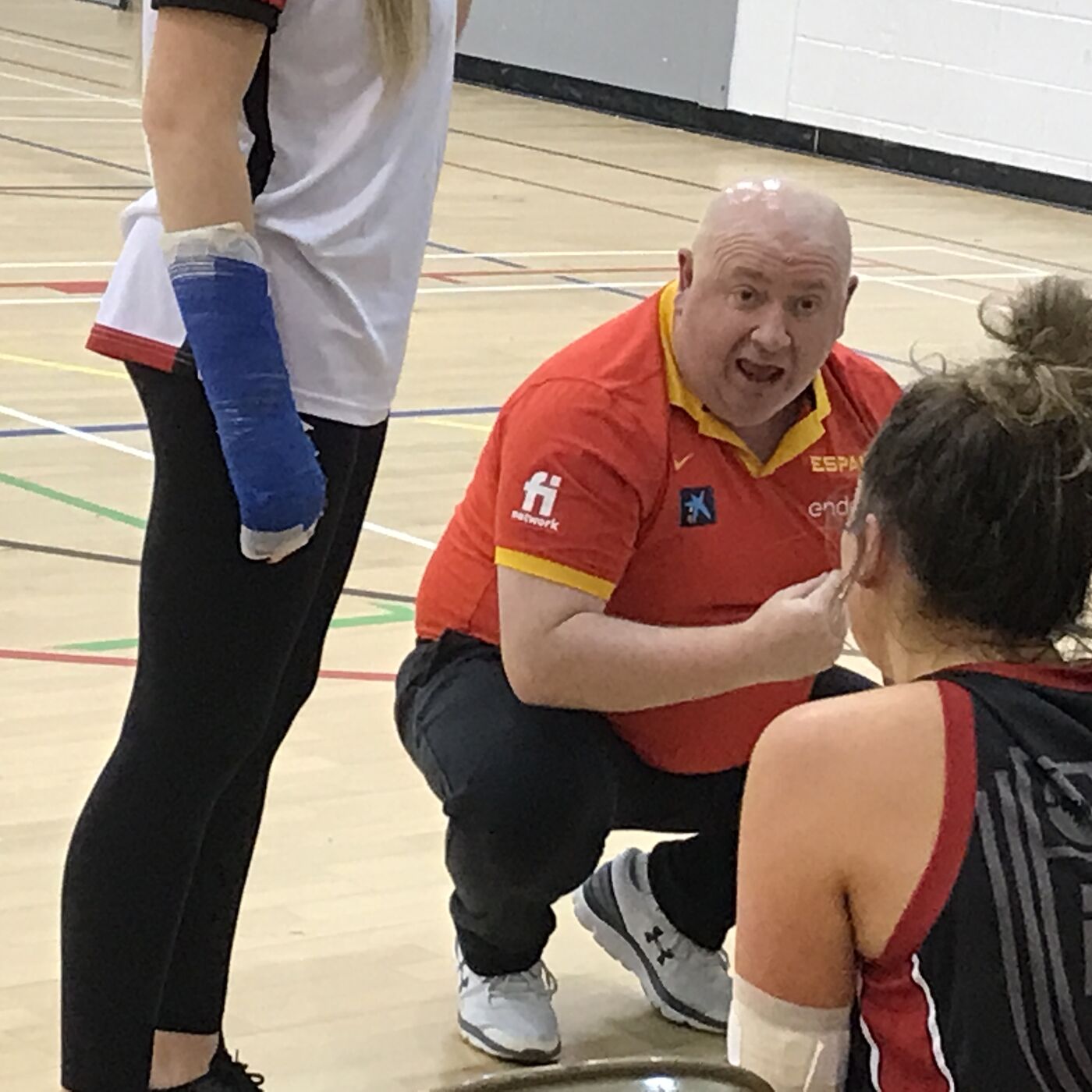 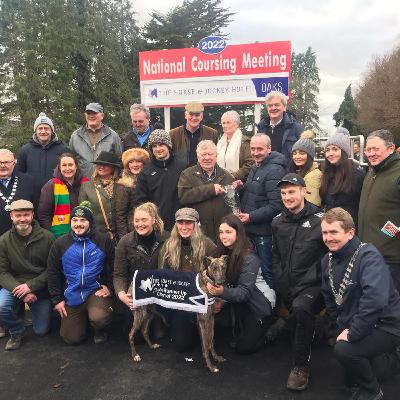 Greyhound trainer, Maurice Lawler, reflects on a wonderful success story at the recent National Coursing Championships where rank outsider, Tactical, was runner-up in the Oaks Final in what was described as a race for the ages. He also defends the sport and says the bad press which coursing sometimes get is undeserved. 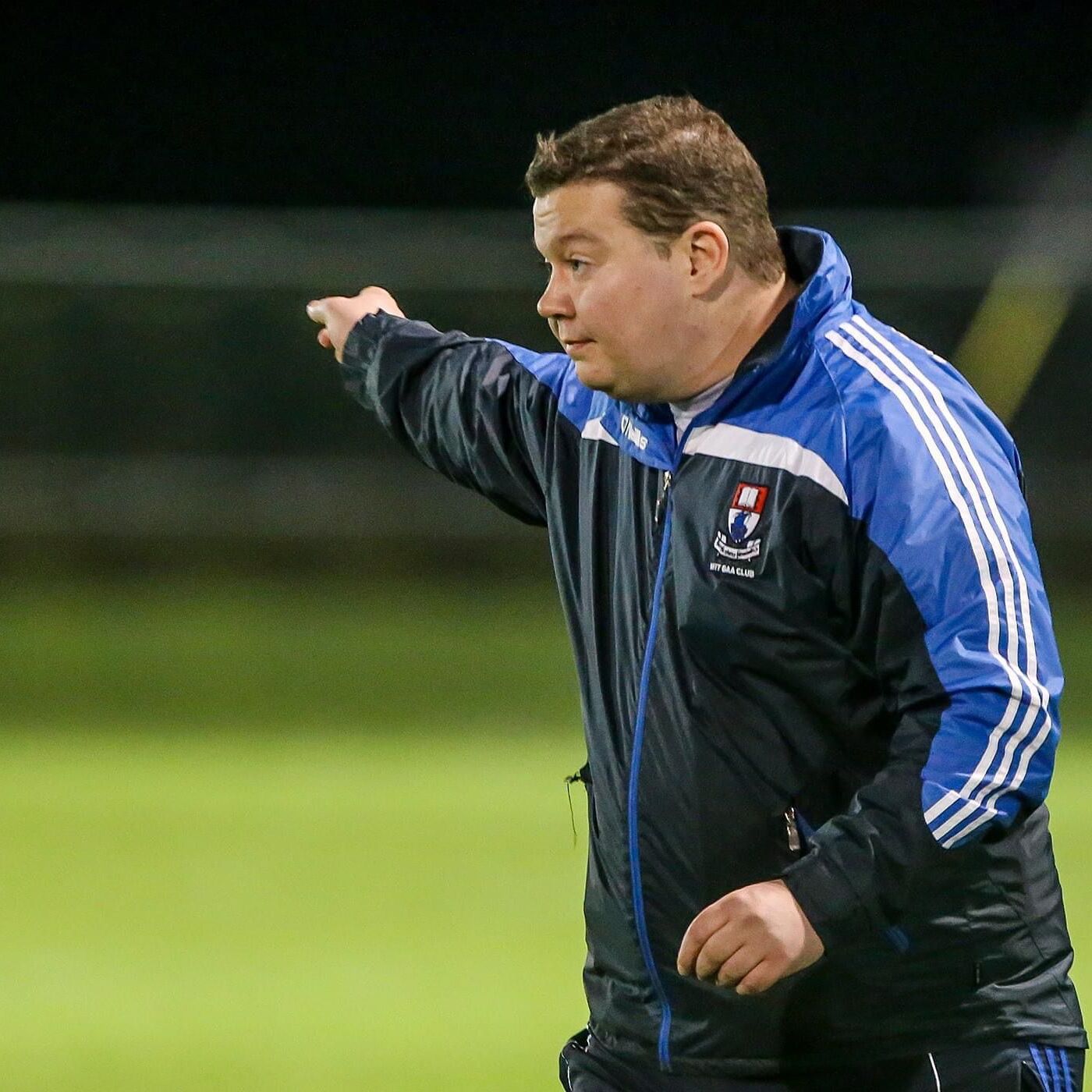 Today I talk to Kilkenny man, Pado Flynn. Pado has joined Palatine GFC and will coach their senior footballers this year. We discuss his reason for joining the club while we also hear his views on the national GAA competition structure, his relationship with referees and other topics.
See More
Comments