"Every time I show up, I'm going to go all out" - with Monique Impagliazzo

This week on Storytellers: Behind the Scenes, Jodi is joined by filmmaker and producer, Monique Impagliazzo. On this episode they discuss Monique’s early days in the industry, the many hats she has worn on set in different departments and the importance of female film crews. A Philadelphia native, Monique currently lives in Los Angeles where she has had the opportunity to work in commercial, feature films, documentary, television and was even the executive assistant to Barbra Streisand! In this episode they dive into the writing and fundraising process for Monique’s feature film which is currently in development, Lights, Camera, Christmas. You will get to hear all of Monique’s behind the scenes stories from her career in addition to some incredible advice for those looking to navigate the film industry. This is an incredible episode that you will not want to miss!

"Head on a Swivel" with Cyndi Butz

This week on Storytellers: Behind the Scenes, Jodi is joined by friend and colleague, Cyndi Butz. Butz has made a career working behind the scenes on many television shows for various networks. She broke into the business as a receptionist and then quickly skyrocketed to becoming a Production Manager and worked her way up to Executive Producer. She currently works as a Senior Producer at VMG Studios in Bellevue, WA. Their conversation takes us through working together at Banyan Productions and on the popular Food Network series, Restaurant Impossible! They also discuss Cyndi’s early career, how her experience as a football coach has been applied to her work and personal life as well as the entertaining Butz has done in front of the camera! Listen to this natural born storyteller dive into her behind the scenes experiences in the entertainment industry and provide some insights for those who are just starting out! For more information on Cyndi and the amazing work she is doing, check out the links below. https://www.cyndibutz.com/https://www.theseattlemajestics.com/

On this episode Storytellers: Behind the Scenes welcomes Mary Beth Anderson, a highly accomplished TV Director and Showrunner who has worked on many top rated shows on network and cable television as well as popular streaming platforms. MB made her mark early in her career on TLC’s Trading Spaces and Food Network’s Dinner Impossible and has gone on to accomplish numerous accolades for her talents. She is also a successful entrepreneur who focuses on authentic storytelling and creating unique branded campaigns for her clients.  In this episode Jodi and MB share stories from their early career, MB’s adventurous family life on the road as well as some new and exciting projects she’s got in the pipeline. https://www.openthejunkdrawer.com/https://www.mbthatsme.com/

Many of you asked for more from Rob Marish, Director of Photography, Keystone Pictures Partner and long time friend of Jodi! Enjoy this extended cut of Jodi's interview with Rob as they discuss more advice and stories from Rob's career, his experience as a musician and even as a professional corpser! Enjoy the extra laughs, stories and wisdom Rob shares and learn a little more about how to become a story teller in creative and innovative ways!

In this episode of Storytellers: Behind the Scenes, Jodi is joined by her husband Darryl Rode who is the founder and president of Keystone Pictures and has been established in the media and film industry for quite some time. The two talk about Darryl’s early “trials by fire” coming into the industry, his most memorable media experiences including Live Aid, the Move House incident, as well as his tips for industry beginners.http:///Keystonepictures.tv

"You get knocked down, and you get back up" - With Shawn Puncochar

This week on Storytellers Behind the Scenes, Jodi sits down with her friend and former Banyan Productions Producer, Shawn Puncochar. Shawn is VP of Perpetual Entertainment, owner of Visco Fitness, has multiple projects in the works and is also a mother of six; she truly does it all! Together, they discuss Shawn’s career and navigating life as a working mother. Shawn is an inspiration and an incredible storyteller who grew up in the business.  Viscofit:TwitchFacebookInstagram

Jodi is joined by Tim Archibald of Keystone Pictures, an experienced and skilled Director of Photography who has been working in the industry for over 20 years. In this episode, he and Jodi talk about his career highlights working the Cannes Film Festival with Stella Artois, and many other huge live events, as well as tips on how to be a “Swiss army knife” in the film industry.  For more information on Tim and the Keystone Pictures crew check out the link below! http://www.keystonepictures.tv

"Everyone has a Unique Story" with Wendi Caplan-Carroll

In this episode, Jodi is joined by her longtime friend Wendi Caplan-Caroll. Wendi is the co-founder of Square Biz Marketing and Advertising which provides deeper and more local solutions to B2SMB Marketers. Her company helps brands tell their stories and connects them to membership organizations, referral partners and local influencers. Listen to her and Jodi backtrack through her career in radio and marketing as well as provide advice for people starting out in the industry and how they can utilize their uniqueness to propel themselves into the fascinating world of media,  film and entertainment.

"Networking is Imperative" with Andy Obeck

This episode of Storytellers, Jodi is joined by Andy Obeck, Vice President and Director of Photography at Keystone Pictures. Andy gives us a brief overview of his career and how every job has impacted where he has ended up today. He and Jodi discuss the importance of working on a team and his path to Keystone Pictures, as well as early career strategies and networking for people looking to enter the industry. For more information on the work Andy and the Keystone pictures team is doing, check out their website below:Keystonepictures.tv

In today’s episode, Jodi speaks with LeAnn Erickson, an established documentarian, independent filmmaker, mentor and Temple University Film and Media Arts professor. LeAnn gives listeners the epic backstory of Top Secret Rosies, her documentary about women who worked with the US military creating mathematical calculations that ultimately helped win World War II. In this episode, Jodi and LeAnn talk about dealing with industry bullies, overcoming obstacles and finding your drive. LeAnn gives expert advice to students and those just starting out in the industry about dedicating time to your craft, and finding a work life balance. For more information on LeAnn’s work please visit the links below: LeAnn Erickson, teacher/filmmakerhttp://leannerickson.com/Top Secret Rosies:http://topsecretrosies.com/Neighbor Ladies:https://mediaburn.org/video/neighbor-ladies/ 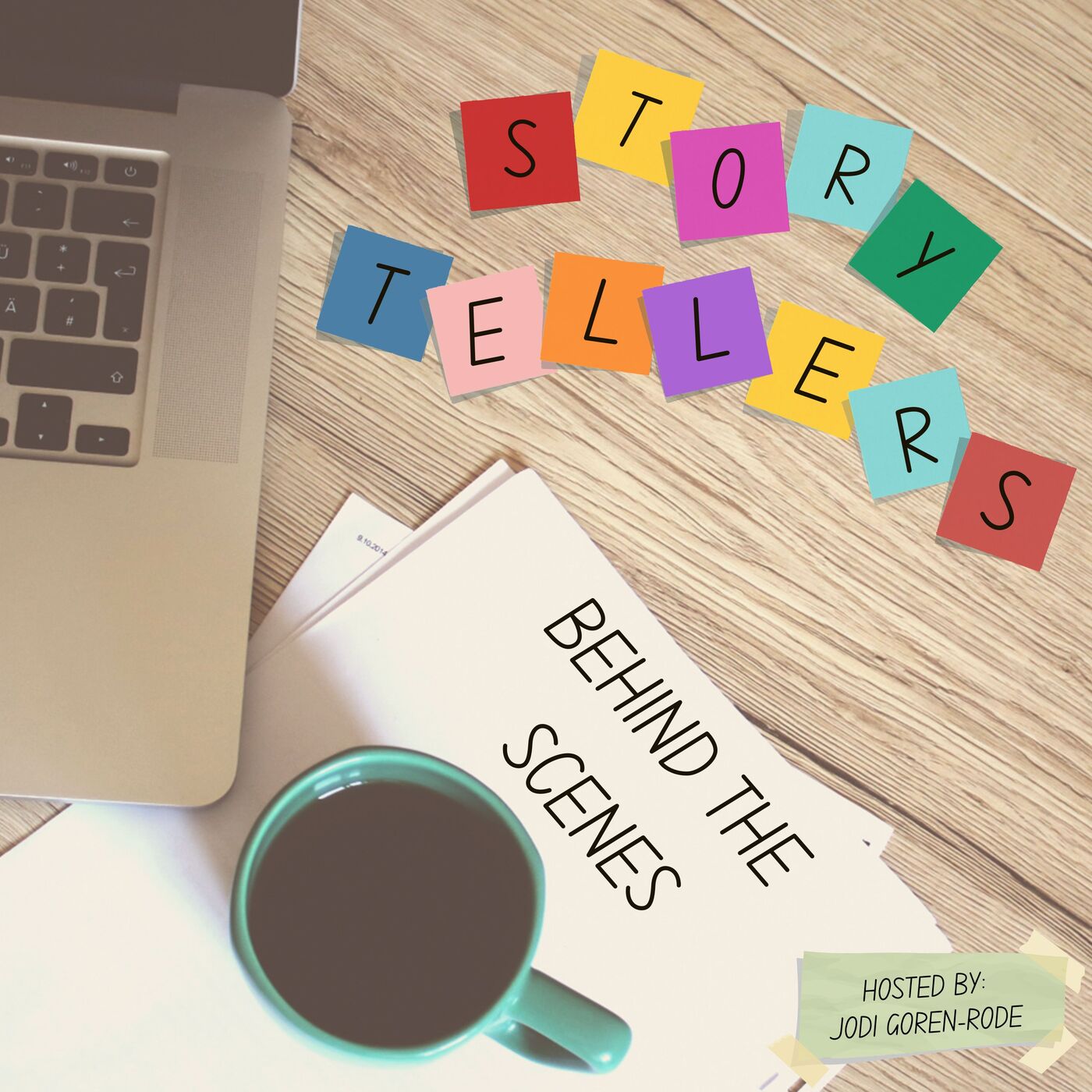 "It's who you know" with Rob Marish

Storytellers: Behind the Scenes welcomes Rob Marish, a DP/Director and partner at Keystone Pictures based in Philadelphia. In this episode, Rob discusses how he got his start in the industry, his mentors that have guided him along the way and entertaining stories about his days working on reality shows like Trading Spaces and more! Jodi and Rob unpack tips on building relationships in the industry, internships and they talk about some of the crazy things that happened on the road during production.

Hi I’m Jodi Goren-Rode of Rodehouse Media and I have been working in the media and entertainment industry for many years. A lot of people think that entertainment and media are glamorous industries, which they can be. Don’t get me wrong I LOVE what I do, but at times it’s not an easy gig, which is why I’m producing a podcast series called “Storytellers: Behind The Scenes” to highlighting conversations with some of the industry’s most successful storytellers who’ll be sharing behind the scenes stories, some that have never been told in public before! We’re talking to creatives from across many industries: Writers, Directors, Producers, DP’s, Actors, Editors, Publicists and more! Each episode highlights my industry friends, colleagues and a wide-ranging group of people who I admire, and even a little star-struck over! Taking a unique look into the back-stories of your favorite tv shows, commercials, documentaries and films. We’ll also share insider information and tips for those trying to break into the business!
See More
Comments