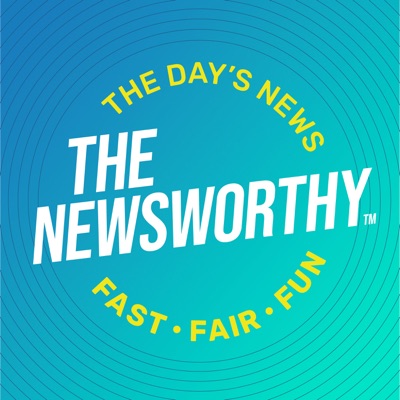 The day’s news made fast, fair and fun – in 10 minutes. Erica Mandy is like a trusted friend who always ‘gets’ both sides. She’s a veteran journalist who was tired of talking heads, alarmist headlines and monotone voices, so she created something different. The NewsWorthy is packed with politics, tech, business and entertainment from a variety of sources -- brought together in one, convenient place (and with a fun twist). Join the thousands of people already listening each weekday!
389 Episodes
Reverse

Today we’re telling you all about the housing market, including what home prices are doing (and why), what popular trends are expected in 2021, and tips for buying, selling and renovating. Plus, you’ll get a behind-the-scenes look at the popular HGTV show, “100 Day Dream Home” with Brian and Mika Kleinschmidt. But first, we talk with Zillow’s home trends expert, Amanda Pendleton, about what everyone should know about real-estate right now. Be sure to tune-in again each weekday (M-F) for our regular episodes to get quick, unbiased news roundups in ~10 minutes!  This episode is brought to you by Apostrophe.com/Newsworthy (Listen for the discount code) and BlueNile.com  Get ad-free episodes by becoming an insider: www.theNewsWorthy.com/insider

Today we’re taking you inside the U.S. Capitol on the day a mob stormed the building. You’ll hear two first-hand accounts from people doing their jobs in the House Chamber when the chaos first began. Then, we examine what some have called security failures. A former Capitol Police Chief offers his insights. Be sure to tune-in again each weekday (M-F) for our regular episodes to get quick, unbiased news roundups in ~10 minutes!  Today’s episode is brought to you by Noom.com/newsworthy and Rothys.com/newsworthy Get ad-free episodes by becoming an insider: www.theNewsWorthy.com/insider

Just wanted to take the time to thank you for being such an unbiased host. I'm sure you have your own beliefs but I appreciate you very much for delivering news objectively. Your podcast is a gem

please stop bringing on sexist sponsors. gender should not be something that's capitalize on.

Hola. just wanted to say, I REALLY appreciate you just reporting the news and not throwing a republican or democratic slant on it. keep up the great work, thanks!

that sponsor tho 🙄 means well but in 2020 gender stereotypes and segregation shouldn't be marketed or endorsed.

The guest on October 31st, who talks about conspiracy theories, has the strongest uptalks or vocal fry I’ve ever heard.  She has many good points, though. But hard to listen.

The Newsworthy is a great way to keep up with the latest news without getting bogged down in it. Erica gives just enough information, & the website links to other sources for each story if you ever want more information!

This would be nice change from main stream media . . .however, you also can't resist putting a negative spin on anything Donald Trump. Thanks but no thanks. Trump 2020.

I love this podcast! Non-biased, succinct, and topics that are important. Thanks Erica!

Love this podcast, Extremely well written, amazing host. And not constantly telling you what you should believe. Easily the best news podcast!

Seriously the ONLY news I listen to! Thanks Erica! 💗

Such a good podcast. Great host!

unknown error is preventing this ep. from playing.