"Today, I'm interviewing a man that has shaped me more than any other man. He's been on this planet for three quarters of a century. He's been married for 56 years. He raised six children professionally. He's done everything from being an over the road trucker, a commercial fishermen, an international business executive, a hospital business manager, a practice manager for a surgeon, an administrative director of a hospice organization and owner of multiple corporations. He's volunteered with the Red Cross, the Boy Scouts of America, and he spent decades serving in his faith community and volunteer roles. He graduated from Florida State University, but of course holds honorary doctorate degrees from the school of hard knocks. Our guest today describes what it means to be a real man and how he has grown over 75 years of failures and successes."

Brad's dad begins by sharing the example his father set about restraining emotional reactions when he broke his own father's tooth with a pair of pliers.

Emory describes the problem with the 'faux alpha'...men who are too angry and self-oriented, leading too loud thereby pushing people away.

He recounts mistakes he has made and what he might have done differently.  Taking supplements, drinking water, exercise and planking have kept him healthy into his 75th year, 23 years after an 8-vessel bypass which was previously thought to only have been remedied by a heart transplant.

He teaches how an Alpha can bring life wherever he goes with friendly conversation and how strong negotiations begin with simple engagement.

He shares a story of how he worked for free with a failing non-profit who was being evicted from their office building until he found ways to increase revenue sufficient to pay for a brand new multi-million dollar facility which was paid for in cash.

Brad's father was an expatriate business executive and lived in Jamaica where he learned what it meant to be a minority, reversing some of his upbringing in a racist environment in the South.

He shares what he hopes for his sons, grandsons, and great-grandsons: that they live lives which reflect a relationship with God and enjoy a happy home life. In this Father's Day Special, Brad and his father get up close and personal about their own relationship and what they have learned together about being a good man.

Send in a voice message: https://anchor.fm/alphaquorum/message
Comments
In Channel 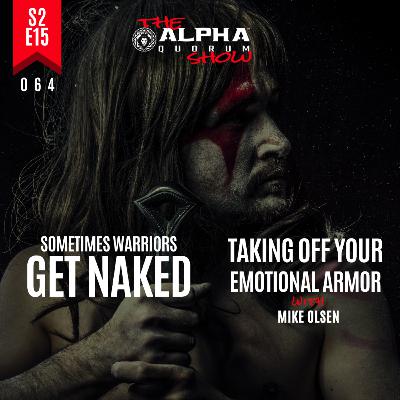 064: SOMETIMES WARRIORS GET NAKED: Taking Off Your Emotional Armor

063: OLYMPIAN SPEAKS - Being ALPHA Against All Odds

061: WRONG POLE - How Alphas Respond When They Are Wrong

059: PISSING BLOOD - How McGriddles and Sudoku Save Lives

058: WHIPPED CREAM - How to Validate Your Partner

057: BRO, YOU BETTER BREATHE OR YOU'RE GONNA DIE - How the Alpha Deals with Stress

056: ALPHA UP - An Introduction to the Quorum and The Red9

055: PISSED ON - Finding Humility to Mend a Separation (with Jimmy Durbin)

054: SH*T SANDWICH - Surviving Separation to Save Your Relationship

052: TRIM YOUR BALLS - Creating Conditions for Passion and Intimacy