Today’s word is: dominant. Dominant means: having control and influence over others, more strong, important or noticeable than others, commanding from superior position.

The word dominant is used to express that a person or an organization has superior position as compared to others and it has a large control and influence on others.

For example, the firm has achieved a dominant position in the market owing to impeccable quality of its products.

Example number 1 of 8:  In the partnership with an Indian company, the multinational company was playing a dominant role. It was getting a larger share of the profit and was dictating terms and conditions. However, later the Indian company decided to separate and function on its own.

Example number 2 of 8:  Aryan started as a volunteer with a political party. He worked diligently for several years. Over a period of time, he assumed a dominant position within the party by virtue of his commitment.

Example number 3 of 8:  The dominant lion in the group became old and weak. As a result, the younger and stronger lion seized the opportunity and drove him away from the area.

Example number 4 of 8:  Manjari is a dominant figure in the field of Art. She takes active interest in the promotion of art and regularly organises exhibitions for the same.

Example number 5 of 8:  The boxing match between two famous boxers was very thrilling. Mike was dominant of the two because of his height and weight. But the other boxer was very agile (means very fast) and he defeated Mike by scoring more points.

Example number 6 of 8:  Mihir started working in plays after his graduation. He had a good physique and a dominant personality. Therefore, often he would be chosen for the role of a warrior or a police officer.

Example number 7 of 8:  The team leader noticed that the unity in his team was disturbed. He observed that one of the members with a dominating nature was adversely affecting the team spirit. Hence, he arranged a workshop to improve the collaboration amongst the team.

Heath and education turned out to be the dominant issues in this election. The party promising to focus on these critical areas won the elections.

Today we learnt the word dominant which means having control and influence over others, more strong, important or noticeable than others, commanding from superior position.

Can you frame 3 sentences with dominant and type in the comments box? We are waiting.

We are sure this lesson has helped to develop your English vocabulary and speak fluent English. You can download the script of this episode and all our episodes from www.bmenglishspeakingradio.in. Stay tuned for new English vocabulary lessons.

We are on a mission to train 1 crore Indians in English fluency.

This was episode number 181 of 200 BM Vocabulary episodes that we have planned. Kindly note that we will be sharing 1 vocabulary episode daily at 6 am Indian Standard Time.

So meet you tomorrow at 6 ‘o’ clock with a new word! 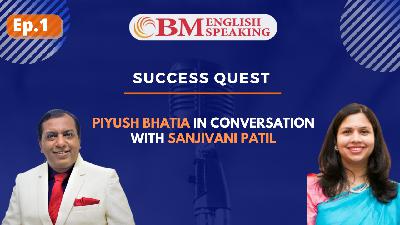