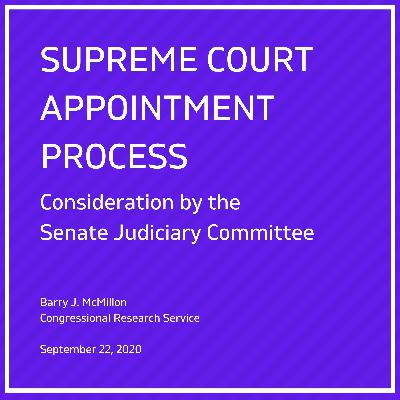 This episode is a reading of a September 22, 2020, Congressional Research Service report titled, "Supreme Court Appointment Process: Consideration by the Senate Judiciary Committee."

The appointment of a Supreme Court Justice is an event of major significance in American politics. Each appointment is of consequence because of the enormous judicial power the Supreme Court exercises as the highest appellate court in the federal judiciary.

This episode describes the process that has occurred since the late 1960s, as the Judiciary Committee’s consideration of a Supreme Court nominee almost always has consisted of three distinct stages—(1) a pre-hearing investigative stage, followed by (2) public hearings, and concluding with (3) a committee decision on what recommendation to make to the full Senate.

An audiobook I narrated following the release of the Mueller Report:

Mental Model Mastery: How to Think Clear, Smarter and Faster. The Art of taking big decisions and Smart Bets

III. Legal Defenses to the Application of Obstruction-of-Justice Statutes to the President (Mueller Report, Nov. 2020 update)