DiscoverThe Cycling Podcast58: Life in the Peloton – The 2014 Giro d'Italia 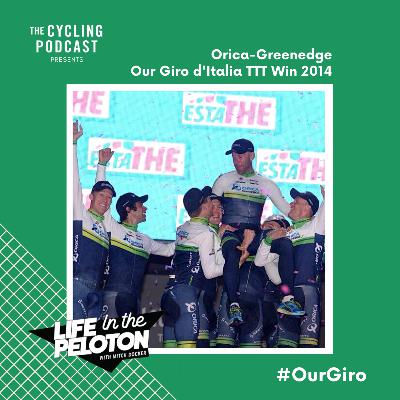 There's a Giro d'Italia flavour to a very special episode of Life in the Peloton.

Mitch Docker gets the Orica-GreenEdge band back together to tell the story of an unforgettable Giro for the team.

Orica-GreenEdge won the team time trial in Belfast to put Svein Tuft into the maglia rosa. The following day the jersey swapped to the shoulders of his teammate Michael Matthews and the Orica riders spent the next week defending the lead.

Later came a stage win in pink for Matthews at Montecassino and another for Pieter Weening at Sestola.

For this episode, Mitch has spoken to his old teammates plus sports director Matt White about the build-up to the Irish Grande Partenza and the pressure of going into the first stage as one of the favourites. Together they piece together the story of a band of brothers battling together to do the best for their team.

This episode was recorded remotely during lockdown. The producer was Will Jones.

Or, as he knows them, Durbo, Heppy, Burt, Bling, Kamikaze Cam, Sveino, WeenDog and Whitey.

Keep in touch with Life in the Peloton

Keep up to date with everything that’s going on with Life in the Peloton at my website lifeinthepeloton.com

Check out my range of Life in the Peloton merchandise on our Etsy store too, from beanies and caps to embroidered tees, logo tees and much more. Visit the Etsy store.