Karen Kay, is a former BBC news editor who now lives and works with, fairies, angels, unicorns, and mermaids. She is also known as " The Fairy Lady”.

Karen founded her own International fairy magazine called "Fae" in 2007.   Her connection to the fairy realm began as a young child in her Grandmothers garden. She used to make fairy perfume from fallen rose petals and leave it for the flower fairies as an offering. She is related to renowned fairy poet and author, Walter De La Mare, and often feels his energy around her when she is writing and composing fairy music with her partner, Michael Tingle, from their home in Cornwall, in the UK.    Karen has produced several meditation CD's, and spoke about fairies as "nature angels" on the "Hay House" World Angel Summit in 2017, where around 150 thousand people tuned in to hear her talk. Karen is currently working on her forthcoming fairy book and also writing a fairy oracle card deck.    Karen likes to share her connection with the fairy world in order to inspire others to take notice of their surroundings and help them protect nature, which is the home of the fairies. She leads people into fairyland with her workshops, talks and guided fairy meditations.    She is a certified Fairyologist and writer and also founded the 3 Wishes Fairy Festival, the UK's first award-winning Fairy Festival with overnight camping, live music stages.

What we chat about:

Going from a BBC news editor to The Fairy Lady

Making a career out of what you love

Following your passion Are Fairy’s real?

Connect with the Fairy realms

How to become an earth Fairy Activist

A Fairy and Unicorn activation meditation

As I AM Goddess Collective transitions into NU Earth, we are growing into a community supported independent podcast. If you are a fan of the show and have loved the platform we have created we kindly ask for your direct support. Join us on Patreon for bonus episodes, meditations, monthly live gatherings, and giveaways!

Head on over to Patreon.com/goddesscollective to support the show!

165: Your Destiny is Written in the Stars with Debra Silverman- Best of I AM Goddess Collective

163: How to Communicate with Spirit through Ceremony, Yoga, and Nature with Ana Forrest and Jose Calarco

161: Living with Endometriosis + Empowering Yourself through Pain, Disease, and Chronic Health Conditions with Jessica Murnane

159: The Power of Choice and Becoming a Leader with Ruby Fremon

158: How to Shift from a Scarcity to an Abundance Mindset with Jenna Black

157: The Science of Understanding Yourself through Human Design with Erin Claire Jones

156: Art to Support Your Spiritual Journey with Catherine Rains

155 - The Answers are Always in Nature with Davana May

154: Exploring the Benefits of Cannabinoids with Jessica Assaf

153: The Magick of Marketing with Krista Ripma

152: The Initiation of Chiron- The Wounded Healer Archetype with Mimi Truong 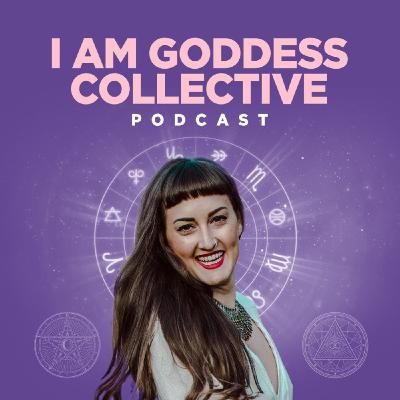 151: Tapping into Your Creativity During Uncertain Times of Change with Flora Bowley

150: Sacred Sensuality for Self Love, Pleasure and Healing with Sabrina Vedete

149: Creating a New Paradigm in Business- Merging Spirituality and Practicality with Tanya Khani

148: Accepting your Emotions as your Superpowers during Pisces Season with Mimi Truong

147: Natural Skincare for Inner and Outer Beauty with Nadine Artemis

146: How to be in a Conscious Relationship and Love Unconditionally with Nixie Marie and Cameron Van Peebles