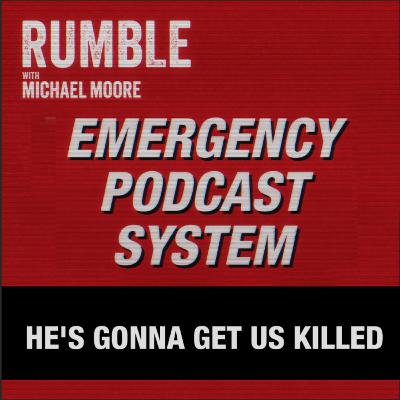 New York is days away from the massive manslaughter of thousands of innocent souls whose only crime was to be living in the time of Trump. Instead of a few hundred that might have otherwise died from an errant virus, thousands are now at death’s door because the profit motive is keeping the gear they desperately need away from them. And because we’ve now learned that the President chose to do little or nothing to help — initially blaming the “hoax” on the Democrats and the media, and then being clueless as to how to order, gather and ship the needed materials. As of this posting, nearly three 9/11’s-worth of Americans have died, and many more are about to join them. This time, though, Americans were killed by a different type of terrorist. There will be no memorial built to honor them, no country to invade to avenge their deaths (Mar-a-Lago is not a country).

Michael Moore issues an urgent appeal to his listeners on this special emergency edition of RUMBLE to immediately share their ideas with him as to how we can beat back two monsters at once — the war profiteers and the war president.

thought this may interest you.. Put another way, the deepening difficulties also suggest the possibility that we may now be well into the prehistory of the next American revolution, that Option Six may ultimately involve longer-term changes much greater than many have contemplated. It is o possible to know in advance what may or may not occur. Nonetheless, such a time is a time when it is also our responsibility to begin to consider the fundamental question of how a "next system" might and should be organized, a time to begin to explore new ways to achieve the great American values that can no longer be achieved by the dying system. Gar Alperovitz, What Then Must We Do?: Straight Talk about the Next American Revolution. #bernie2020 #UniteOrDemocracyDies

regarding your call for action...I wish to share my thoughts....MIKE you are a voice and .ind we progressives respect...we have been stripped of our grassroots leadership....we need to be united under one general....I humbly ask you th pick up the mantel...I am not able...but I can help...below is my post to all American Patriots.... We have become devoid of true Patriotic leadership....an Orphaned Country.....The Oligarchs have declared a WAR of Attrition on our Constitutional Rights and Principles ; have silenced or neutralized our Representatives and left us in the lurch ....if we do nothing...we will be responsible for the failure of the "AMERICAN EXPERIMENT "..we will be subjugated to Tyranny...and reduced to subjects. Our forefathers fought a Revolution to break away from oppression, and exploitation, gave us a Magna Carta in the form of the CONSTITUTION... then charged us with the duty to secure and maintain those rights... They is OURS to loose.... Bernie Sanders is our William Wallace...our Alexander Hamilton.... In our winter of discontent there are other voices crying out to us from the wildernss... Michael Moore is one of those' voices as well as Bernie Sanders and...AOC. What are We willing To do?..Will we be The Good Steward...To quote on of our Great Presisents.."Ask not what your country can do for you,ask what you can do for your Country"...or will be witnesses to the destruction of OUR Constitutional Democratic Republic ....the choice is ours...the time to unite is now. #bernie2020 #UniteOrDemocracyDies Ra Shakoor...3/05/2020

Mike this is a repost from a BERNIE GROUP...the author is Dan Shambo....I think this is viable.. I have said many times we have a tool we don't use because beyond Bernie we are a loosely organized group. So WE need to come together on this and it's simple. We start by agreeing on a business to boycott. Than we make an announcement that until they get out of our politics we won't be doing business with them. Or any other demand we feel is important on the prescribed day we simply stop buying from that business. Now of course the boycott won't be 100% and it doesn't need to be a 10% -20% drop is huge for a business from there they either give in or we continue to boycott them until they do.

in terms of equipmen needed, I'd say smash and grab is the only option given the time frame...A convoy of hundreds of Semi-Trailers is what I'm envisaging. Let them try and come after the drivers responsible for saving thousands of lives... in terms of crisis management. Urgently establsh an apolitical team of the very best medical and scientific credentials to run the show. Let the government focus on remediating the fallout, economic or otherwise. Keep politics out otherwise more will die.