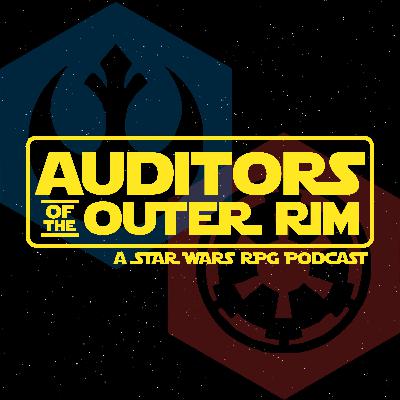 This is the first episode of Auditors of the Outer Rim. We're using the Star Wars RPG Edge of the Empire by Fantasy Flight with a focus on fun and story before rules. Find us on Twitter @AuditorsPodcast and on all major podcasting platforms.

Story so far: Coming together out of necessity, this group of renegades escaped the grasp of their Hutt crime lord, stole his ship, liberated his slaves, and returned to end his reign. Their final escape from Tatooine caught the eye of the empire; narrowly avoiding destruction, they returned to Ryloth to seek help from those they saved. In exchange for future employment, their ship, renamed to The Auditor, was repaired and remade. The Auditors were born.

On the twin-sunned planet of TATOOINE, 4 escapees flee the quiet town of MOS SHUUTA and its ruler, TEEMO THE HUTT. Stealing an old freighter named the KRAYT FANG, the group of rebellious upstarts made for the planet of RYLOTH in the company of a Twi’lek prisoner.

Once there, the group uncovered a sinister plot of the HUTT, utilising slaves to mine an illegal substance known as SPICE. In eliminating TEEMO’s illegal activities, the party found themselves once more the focus of the HUTT’s wrath, leaving them but one option; eliminate the HUTT entirely.

A daring breach into the heart of TEEMO’s empire saw the party, disguised as AUDITORS, download and flee with all TEEMO’s business records that, once leaked, revealed TEEMO as shorthanding other members of the HUTT CLAN, permanently severing TEEMO from the power of their CLAN.

And such, a legend was born, adopting the name of the role that bought them their freedom as they roam the galaxy in search of fame, adoration, and of course, credits. This is the start of the group that would come to be known simply as the Auditors.

Check out our links:

Original music provided with licenced or permission by:

If anyone wishes to use any audio or visual elements from this podcast, they may do so with appropriate attribution. We encourage you to use our works, but please contact aerilymbiz@gmail.com if you wish to do so out of courtesy and to ensure it's ok.

Auditors of the Outer Rim