When Clang announced that a Irish heavy metal festival was being held in spring 2020 and it would feature several Metal headliners along with over 20 Irish metal bands on two stages in the National Stadium Dublin, everyone in the Irish Metal Scene started texting each other. The majority of people were fairly dubious about the whole thing and nobody knew who or what was behind Clang. As the press releases kept coming there was a growing feeling that it was going to fall flat on it's face until COVID intervened and everything was rescheduled. Some more updates followed, a new date was set for 2022 with the announcement that festival was downsized. There was still a lot of uncertainty about which Irish bands were going to play or who to approach about getting on Clang. It was therefore a pleasure to welcome Rob on the show to clear up the whole Clang drama and to cast aside some of the negativity aimed at the festival. It remains to be seen whether Clang can be a success or not but at least you'll be left with a better understanding of the aspirations of Rob and his team, as myself and Howard were. Hope you enjoy the episode and please subscribe to the show if you enjoyed it.

Episode 140: Myself and Howard were delighted to welcome John Quill the singer/guitarist with Third Island & Quill Effects and Tomás Hynes of Foraoisí gan Iniúchadh, a one Man DSBM / Atmospheric Black Metal band.

Episode 139: Darragh of Horrenda, Shannon of Aborted Earth, Tony of Restive Nation and Tom of Zhora from the All Ireland Metal Project; the first release from an unique collaboration of musicians, artists and film makers titled Aiséirí.

Episode 138: Alex CF is a London based incredible illustrator, author & vocalist with many bands namely "MORROW", "ARCHIVIST" and the highly influential but broken up "FALL OF EFRAFA".

Episode 137: The Metal Cell Forums. Join myself, Danielle, Evan and Joe as we talk about the Metal Scene, review bands and discuss topics related to our favourite music....METAL!

Episode 136: Words That Burn's Jason Christy (Drums) talks about their blistering Bloodstock gig & gives us an update on new songs

Episode 131: The Metal Cell Forums. Join myself, Danielle, Evan and Joe as we talk about the Irish Metal Scene, review bands and discuss topics related to our favourite music....METAL!

Roy Geary singer of Greyface gives us a brief history of the band and future plans.

Episode 127: Steve (Guitars) & Luke (Bass) of Belfast based Puresonic Outcasts, talk about bringing their brand of stoner rock/punk & metal to the masses.

Episode 125: The Metal Cell Forums. Join myself, Danielle, Evan and Joe as we talk about the Irish Metal Scene, review bands and discuss topics related to our favourite music....METAL! 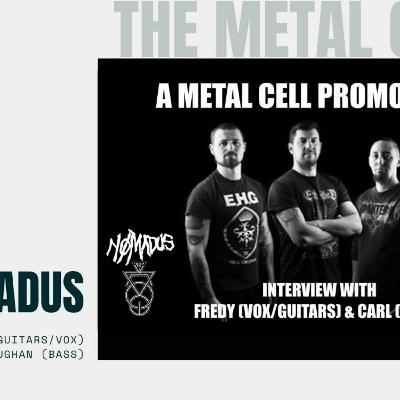