Today we will explore how to interact with Social Media and keep yourself focused on the impact that social media and addictive viral media has on how you treat others with care or carelessness. When Angela trained in Mass Communication we researched the history of documentary and fiction film, radio, creative video and theater. She used the term Mass Communication and the modern forms of Social Media and Viral Media grew out of these forms of mass communication as a way for every human to participate actively in all forms of mass communication. Social Media was a way for the people to create their own stories and respond to the mass media being projected on them or about them.

Is this similar to shadow work? Shadow work comes from the term “the shadow self,” which was coined by famed 20th-century psychologist Carl Jung. In Jungian psychology, this term describes the unconscious parts of the personality that our conscious ego doesn't want to identify in itself.  Shadow work is a process of inner work in which you bring those unwanted parts to the surface to purify, heal, and integrate into yourself. Your shadow isn't something to be ashamed of or something to hate. It simply points to where you have work to do and where you got to give yourself more love.

Often if you watch that media, if you literally just watched how the media makes you FEEL, you would get the TRUE impact of that viral media.

There are some positive examples of viral media - like my favorite eurovision band from Iceland- that had a dance craze from their song “Think about things”  from Dadi Freyr and Gagnamagnið.

To Book an Energy Healing Session with Angela

To book a coaching or reiki session with Patti

Thank you for listening!

DISCLOSURE: Please be aware that we will be sharing affiliate links in this post. 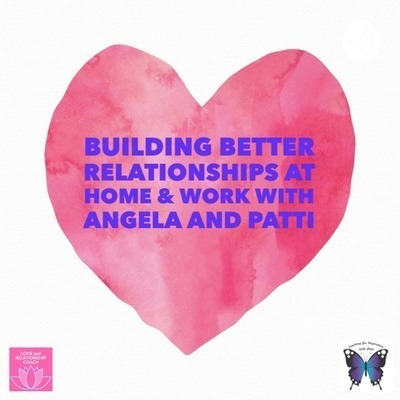 Episode 53 - Is Marriage Built To Last?

Episode 52 - Claiming Your Value at Work or Entrepreneur

Episode 51 - How To Change Your Mindset and Relationship With Money

Episode 49 - How Balancing Thoughts and Feelings Make Your Relationships Better

Episode 46 - How to Calm Anxiety with Work and Money

Episode 45 - Daily Habits to Prevent Depression During Stressful Times While Strengthening Your Relationships!

Episode 43 - Managing Negative Emotions in Relationships Whether at Home or Work!

Episode 42 - Building a Better Relationship with our Planet!

Episode 41 - How Spending Time in Nature Can Help You and Your Relationships!

Episode 40 - Finding Purpose Beyond Work - There is More to Life than Working!

Episode 39 - Finding Your Purpose through Loneliness!

Episode 37 - Is Your Relationship Lock-Down Proof?

Episode 36 - How Can Reiki Healing Help You and Your Relationships?

Episode 33 - The Damages and After Effects of People Pleasing to Yourself and Others!