DiscoverDogs Are Smarter Than People via AnchorIF UFOS ARE REAL WHAT ELSE IS TOO? HOW TO DEAL WITH THE UNBELIEVABLE

So, if you check out the link to this article on the Huffington Post by Leslie Kean, you'll have some good background on what we're talking about.

But Kean writes about the  To The Stars Academy of Arts & Science, which is meant to "advance research into unexplained phenomena and develop related technology."

One of the players in that is Luis Eiizondo who worked for the United States' Department of Defense.

Leslie KeanIn short, less that two weeks after leaving the Pentagon, Luis Elizondo confirmed that UFOs are a real; they exist, and they have been officially documented. Can anyone argue with this fact now, given where this man comes from and what he knows?

And he kind of sort of pretty much said UFOs are real and that's a big deal.

Because if UFOs might be real, what else is? As writers, we're always trying to make sure that our stories are believable, but what if the unbelievable is no longer unbelievable? What happens then?

We can believe that someone saw a UFO hovering over the Maine Turnpike if we see them before it happens, see them react to it in a way that's consistent with their character, and see them deal with the after effects.

WRITING TIP OF THE POD -

To make the unbelievable believable focus on details.

Your life can become unbelievable in a good way. Embrace that.

If you listen to the podcast, you’ll hear:

THE NETHERLANDS IS AWESOME

Steve Wedel and I wrote a super creepy book a few years back called After Obsession and it’s making a big freaking splash in the amazing Netherlands thanks to Dutch Venture Publishing and its leader Jen Minkman.

IN THE WOODS – READ AN EXCERPT, ORDER NOW!

My new book, IN THE WOODS, is out!

It’s with Steve Wedel. It’s scary and one of Publisher’s Weekly’s Buzz Books for Summer 2019. There’s an excerpt of it there and everything! But even cooler (for me) they’ve deemed it buzz worthy! Buzz worthy seems like an awesome thing to be deemed!

You can order this bad boy, which might make it have a sequel. The sequel would be amazing. Believe me, I know. It features caves and monsters and love. Because doesn’t every story?

Dear Bully, You Are Ruining Things Because We Are Awesome And You Are Not

What The Heck Do Men Want

GROWING UP WITH GRIT A BONUS PODCAST INTERVIEW WITH CHANTAL WATTS

Slug Bait or Sage What Are You

Are You a Seducer or Do You Fall Out of Cars?

Are You a Misfit? What's Your Archetype, Baby?

We dogs smell poop the way sommeliers smell wine. It's about nuance. 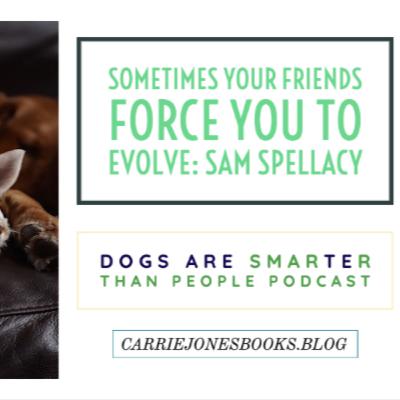