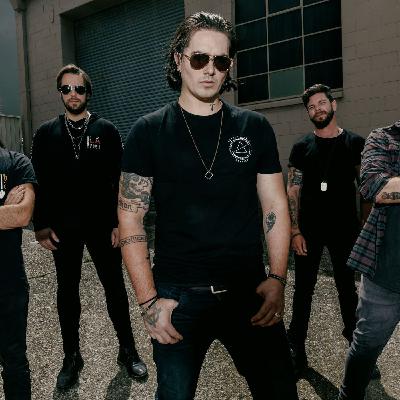 Sydney hard rock outfit Bad Moon Born are emerging from the COVID period firmly on the front foot.
Although the pandemic decimated an entire industry, Bad Moon Born were definitely one of the bands to feel the pinch a little deeper than most.
After establishing themselves on the touring circuit and delivering time and again without fail, Bad Moon Born were within sight of that elusive next step in the music scene that provides some form of compensation for years of toil and sweat.
They were touring the country, supporting some major international touring acts, and getting their music in front of the people that can seemingly make or break a band with a flick of the pen.
Their star was certainly on the rise, but just before it reached its climax the rug was unceremoniously pulled from under them and the reality of seeing all of that hard work and effort fade reluctantly into enforced lockdown was one of the many unfair stories to come from the global plight.
Rather than pull the sympathy card from the deck, Bad Moon Born took stock of their music and have emerged from enforced isolation with a fresh musical outlook, accompanied by a renewed desire to succeed.
Musically the band have done a considerable back flip, shedding the grunge fueled direction they had previously travelled, in favour of a harder edge.
Over the course of four previous singles Bad Moon Born have steadily integrated their new sounds into their fans, with the fourth single of a series of five – Waves (Of The Wild) – coming out just last week.
Guitarist Voya joined HEAVY to talk about the song and the new sounding Bad Moon Born.
"Musically we wanted something a little more modern,” Voya offered. “On this one we wanted a more faster paced song as well, because everything we've done in the past has usually been a sludgy kind of groove based thing and we wanted something crunchy and that’s what we achieved with this. Less layers and more speed."
According to the bands press release, Bad Moon Born have ushered in a new era of existence, a point which required a touch more clarification.
"It definitely feels that way.” Voya agreed. “Two of the members that we had are no longer with us and we've got Jordyn and Shane now and we just wanted to shift completely. It started sounding like a completely different band, so we decided to change every aspect of it. I guess that's what makes it feel like a new era."
In the full interview, Voya runs through Waves in greater detail, talks more about the changing musical landscape, how he thinks fans might react, the five singles and how they connect, signing with Destroy All Lines and more.
Comments
In Channel