DiscoverGates McFadden Investigates: Who do you think you are?New Series: "The Center Seat After Show" Premiering November 5th! 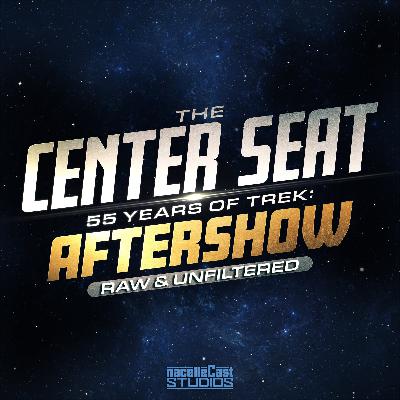 The official after show podcast to the upcoming television series The Center Seat: 55 Years of Trek, premiering on November 5th! Each week, join us here as director Brian Volk-Weiss and professors Mary Jo and John Tenuto take an even deeper dive into each episode of the series that celebrates TV's most groundbreaking series.

The Center Seat is the ultimate deep dive into the world of Star Trek. Timed to coincide with the iconic sci-fi franchise’s 55th anniversary this year, it will offer Trekkies a behind-the-scenes look at pivotal moments in the franchise’s history — from its inception at Lucille Ball’s production company Desilu through recent film and television adaptations.

Subscribe to "The Center Seat After Show" now so you don't miss the peremiere on November 5th! Available on Apple Podcasts, Spotify, Google Podcasts, Stitcher or wherever you listen to podcasts.

"The Center Seat After Show" Podcast - Out Now!