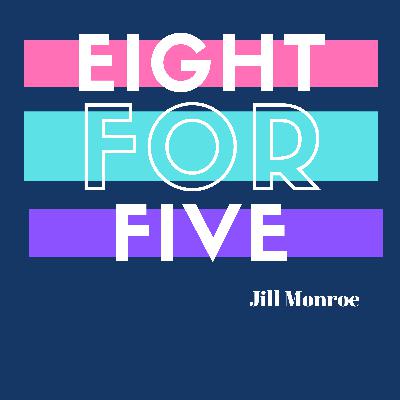 This preview episode of the new podcast Eight for Five gives you the opportunity to put your earphones on, get walking and see what it's all about.

Jill gives a quick explanation of how Eight for Five is set up. The "What's Up?" segment section is all about 2019 and the stinkiest element on the Periodic Table.

References in Segment One:

An 80-Year Old Prank Revealed, Hiding in the Periodic Table by Robert Krulwich

International Year of the Periodic Table

Jill touches on the benefits of walking throughout your day.

Periodic-something that reoccurs in a period of time

Elemental-pertaining to an element, simple or fundamental

Bonus: Get all 3 parts of an atom into a sentence

The Dangers of Sitting from Harvard Health

Why Sitting Too Much Is Bad For Your Health from WebMD

Isaac Asimov once predicted that in 2019 we'd be on the moon mining. While that prediction didn't exactly come true, that's not stopping some from attempting to get rick from moon rocks. Pretend you're an intern and decide to steal some rocks that are out of this world!

Special thanks to Katherine Garbera! Check out her Space Cowboys series:

*Some cowboys are outta this world… *

Astronaut Jason "Ace" McCoy tried to escape Cole's Hill, Texas—and the memory of Molly Tanner's dark eyes and strawberry-scented hair—among the stars. Now he and Molly have jointly inherited her father's struggling ranch. And having failed his latest medical tests, Ace is on leave—maybe forever.

He's determined to sort things out with the ranch and get back to Houston as soon as possible. What he isn't counting on is that Molly's only gotten more beautiful over the years. He can't promise anything as long as there's a chance to go on another mission. But even in orbit, this attraction has no rules…and no limits.

*"Houston, we have a hot-astronaut problem…" *

Hemi isn't just some distraction. Jessie actually likes the guy—and that makes him more treacherous than an Everest ascent. It also means Hemi's that much harder to resist. With every hungry, heat-fueled encounter, Jessie skirts closer to that dangerous edge. Falling for this space cowboy is definitely high stakes…but could the payoff be worth the risk?

This mission is out of control…

Astronaut Isabelle Wolsten fought like hell to be one of the final candidates for the CRONUS mission to space. She can't afford to be distracted by teammate Antonio "Playboy" Curzon.

When the two astronauts are put in direct competition for a top spot on the mission, they'll be tested beyond their limits. Getting involved with Antonio is dangerous—but not nearly as dangerous as the feelings Izzy's starting to have for him. With everything she's fought for on the line, falling for this space cowboy might just ground Izzy's dreams for good…

You can find all of Katherine's books here.

One randomly selected subscriber to my website will soon be enjoying these books. You can subscribe to my newsletter by going here.

Isaac Asimov, you were no Nostadamus by Joseph Hall of the The Star

Eight for Five - the podcast that keeps you occupied while you're meeting step goals throughout your day.

As an Amazon Associate, I earn from qualifying purchases, which helps pay for producing this podcast. Thank you.

BEFORE YOU BEGIN ANY NEW PHYSICAL ACTIVITY, ALWAYS CONSULT WITH YOUR DOCTOR!