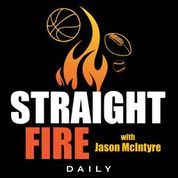 Click here to subscribe, rate and review all of the latest Straight Fire with Jason McIntyre podcasts!

On today's episode, Jason kicks things off with a quick thought on the James Harden now being out indefinitely after suffering a setback in rehab for his hamstring injury. It's looking more and more likely that we won't see the Brooklyn Nets Big 3 together again until the playoffs. If they're all back by the second round, would that be enough time for them to gel and make a run at a championship? Heck, without Harden, are we sure that the Nets even get out of the first round if they ending facing the Miami Heat? Later, Warren Sharp from Sharp Football Analysis swings by to discuss how a focus on analytics helped him get his foot in the NFL media door, how he's able to navigate smokescreens leading up to the NFL Draft and why it's so important to identify reporters with a history of correct prognostications, why some around the league believe that 2022 Draft capital is more valuable than 2021 Draft capital, why he values Florida TE Kyle Pitts higher than any wide receiver available in the NFL Draft, why he's betting on Alabama WR Jaylen Waddle going ahead of his more heralded teammate Devonta Smith, why he's skeptical that Mac Jones would be worth all the draft capital that the San Francisco 49ers spent to move up to #3, and much more!

3 and Out - Aaron Rodgers Bombshell and NFL Draft Rounds 1-3 Reaction!!