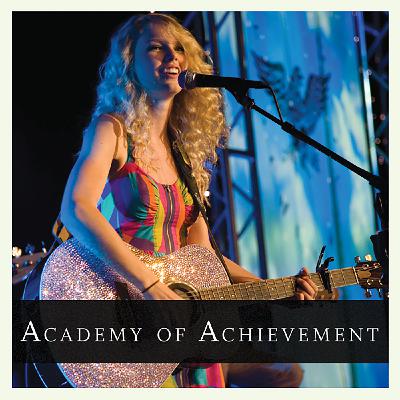 Taylor Swift's self-titled debut album -- recorded when she was still in high school -- sold more than three million copies. A prodigiously talented singer and songwriter, she wrote every song on the album, including the year’s number one country single, "Our Song." Her dedication to music began in childhood. By age ten she was performing at karaoke contests, festivals and county fairs around her hometown of Wyomissing, Pennsylvania. At age 12, she persuaded her parents to move to Nashville so she could pursue her singing career. In only two years she had signed a publishing contract with Sony, making her the youngest professional songwriter in the industry. Her catalogue already includes hundreds of original songs, from plaintive ballads to irresistibly catchy anthems that capture the heartbreaks and trials of adolescence with startling honesty.

A second album, Fearless, topped the Billboard 200 for 11 consecutive weeks, making her the best-selling musical artist of the year. Her 2010 effort Speak Now sold more than three million records within the first weeks of its release. Tickets for her next appearances in America’s largest concert venues sold out within minutes and tour dates were added in 19 countries around the world. By the end of the year, she had sold more than 6 million albums worldwide.

Taylor Swift attended the International Achievement Summit as a student delegate in 2008. This podcast is an excerpt from her performance there.
Comments
In Channel

What It Takes (Introduction)