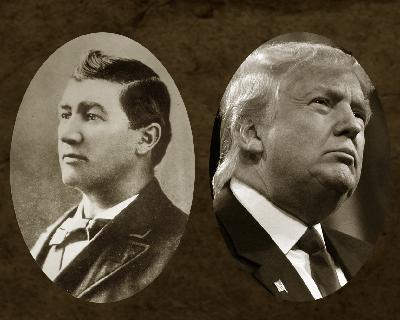 Nearly a century and a half before populist messaging was used to propel the unlikeliest and most divisive of candidates into the Oval Office, the groundwork was being laid amid the most terrifying time in American history.

A true vision of a post-apocalyptic landscape on the verge of exploding into chaos all over again: a sense of corruption at every level of government, starvation in the streets, the constant threat of violence, rampant racist pogroms, and a nation still attempting to heal its self-inflicted wounds caused by a destructive Civil War all serve as the backdrop for the least and yet most likely rise of a firebrand demagogue who will change the landscape of populist politics forever, leaving a smoking crater of legislative destruction in his wake, and yet be completely forgotten to history.

This is the story of this man--this original Donald Trump--and the world that created him and the world of which he took advantage to mould into his own.

Thanks to Kevin MacLeod for the use of his song "Last Hope".

The Devil Soldier and His Ever Victorious Army (Approbation)

The Prisoner on the River Kwai (Forgiveness)

An Impossible Pop Quiz: The Werewolves of the Fourth Reich

The Werewolves of the Fourth Reich (Trauma)

An Impossible Interview I: Daniele Bolelli