Saturday's "Justice For J6" rally is being held to protest government treatment of people who participated in the riot. It could serve as a test of how the Capitol Police force has evolved since January's attack.

And congressional testimony by prominent U.S. gymnasts about the Federal Bureau of Investigation's handling of their sexual abuse allegations raises major questions about the organization's culture and accountability apparatus.

You Should Pay Attention To The Virginia Governor's Race

Why Are School Board Officials Getting Death Threats?

If You're Vaccinated, You Can Visit The US From Abroad In November

The Boston Marathon Bomber Is Undoubtedly Guilty, But Should He Be Executed?

How Much Has The Country Really Changed Since Clinton's Impeachment?

What's Next For The Afghans Now In The United States? 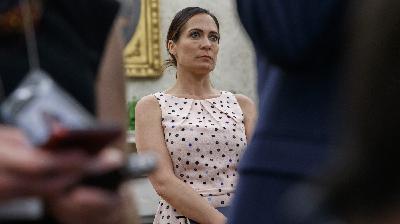 Why Trump's Former Press Secretary Worries About His Influence In 2022

For White Evangelicals, The Identity Is About More Than Religious Faith

The Docket: After A Half Century, Roe V. Wade Faces An Uncertain Future