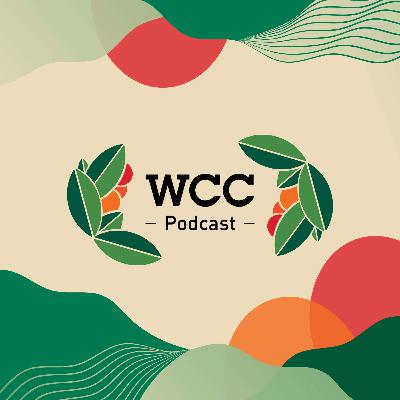 Coming soon to the SCA Podcast channel: The World Coffee Championships podcast! Across six episodes, the series offers a glimpse behind the scenes, bringing to light some of the hidden stories woven in and around these annual events that serve as the culmination of local and regional events around the globe. Listen wherever you get your podcasts, and subscribe to make sure you don't miss the launch!

"It was only like old white guys in suits, you know, and I can tell you one story about this guy. He was, like, giving a speech in front of like a big hall, like, 'women cannot make coffee because they can't tamp.'"  Welcome to new podcast series from the Specialty Coffee Association. "These kind of things just makes me personally stronger because I'm like, okay, I'm gonna show them. You know, this is just like how humans are acting, you know, if we have too many suits you will have some punks coming in. And we were the punks, you know, we were the young people coming in, and like we wanted to change."  In the next six episodes, we're going to explore the World Coffee Championships. Where did they come from? "And so starting from a blank page, I was inspired by, of all things, figure skating." How did things go wrong?  "Everyone backstage was a little bit in shock and we're all looking at each other, like what is going on? Like, is this real? Is this even allowed?" How were they fixed? "You know, a lot of baristas didn't really understand what happened in Dublin. I mean, most people probably don't even know that the Dublin event ever happened."  What changes do you want to see in these competitions? "The guy who was set up next to me... I swear to God he had a stack of like four refractometers sitting on his table. And I said, 'What do you need those for?' And he said, 'Well, I'm using them for compulsory.' "I said, 'All four of them?!'" I'm James Harper, the producer, and in each episode, we're going to hear from people who come together every year to celebrate specialty coffee and push the industry forward. "My name is Christina Jackson." "Emma Markland-Webster." "Chad Wang." "Nyakaisiki Annette." "Um Paul." "Carl Sara." "Trish Rothgeb." "Innocent." "Simi Benzadon." "Chloe King." "Mickey." "José Joaquín Ordoñez." "Maria Esther." "Heather Perry." "Cheryl Lee." "David Jameson." "Turgay Yildizli." "Sylvia Gutierrez." "Federico Bolanos." "Sergey Blinnikov." "Nicholas Cho." "Tone Liavaag." "Jingyi." "Kim Staalman." "Alf Kramer." "Danilo Acosta-Busch."  And to help tell these stories, I'm going to be joined by, "Sara Al-Ali." "Rie Moustakis." "Anna Oleksak." "Roukiat Delrue." "Kimberly Yer." "Sonja Bjork Grant." "Gloria Pedroza."  And listen, we know it's no fun that these competitions aren't happening this year, but we hope this podcast will help us feel more connected. And, if this is the first time you've ever heard of the World Coffee Championships, this series will give you an entertaining window into this world and why we love it so much. You can subscribe on iTunes, Spotify, Transistor, the SCA website, or wherever you get your podcast.  "If that's something that we learn as a volunteers, it's that competitors are stressed. You are stressed. We don't stop running. And I just heard a CRASH."
Comments
In Channel

#91 | A Sixth Era of Coffee? Specialty and Sustainability in Historical and Anthropological Perspective | WOC Lectures 2019

#88 | The SCA’s Price Crisis Response: How Did We Get Here and How Can We Ensure It Doesn’t Happen Again? | WOC Lectures 2019