It is official. US Soccer has shut down the US Soccer Development Academy effective immediately. This is officially due to “…extraordinary and unexpected circumstances around the COVID-19 pandemic…” but SoccerWire and other news outlets suggest that there is more to the story.

Rumors, articles, social media, and blog posts have been circulating for days. Let’s talk about it. 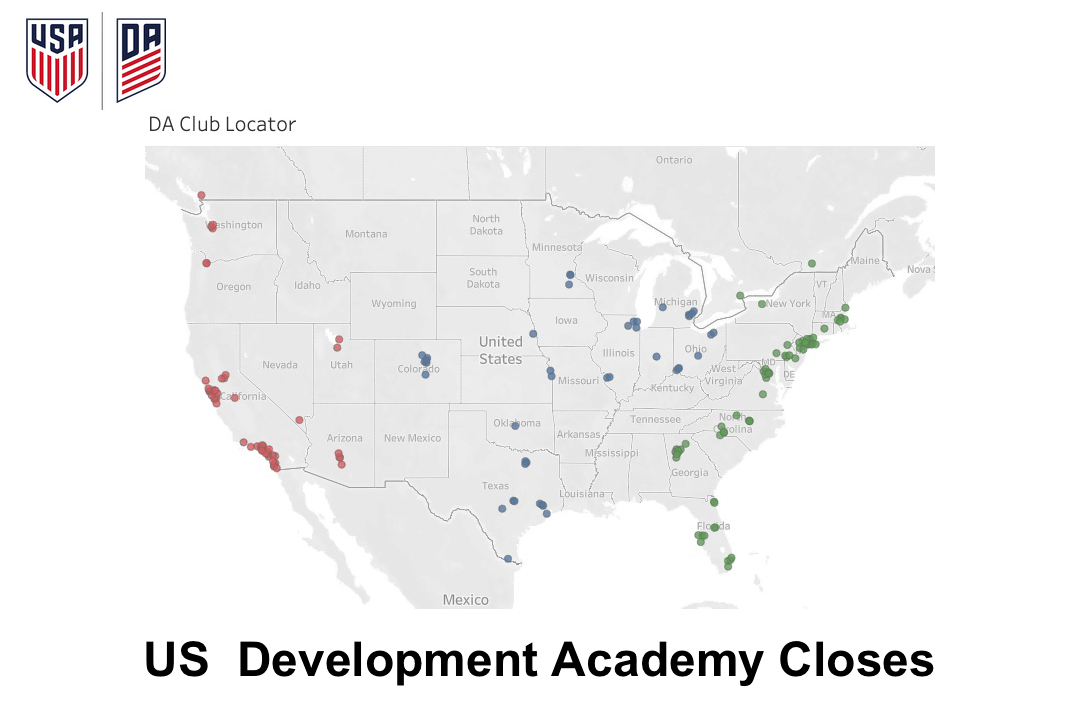 On April 11th, 2020, SoccerWire carried an article titled: “Opinion: COVID-19 provides US Soccer opportunity to shut down Development Academy.” This hit my Twitter feed first, and as you know, I almost reported it to you in Episode 124, but I held it back because at that stage it was still a rumor. I couldn’t find any solid evidence that this was definitely going to happen and didn’t want to use this show to spread rumors. We talked instead about being critical about the news we’re seeing today.

It’s no longer a rumor. One hour after I published Episode 124, US Soccer announced that it was closing the US Soccer Development Academy for good. The reason they cited in the letter they released was “…extraordinary and unexpected circumstances around the COVID-19 pandemic…”

I’ve been around too long to believe the publicly released reasons for just about anything of significance going on are the whole story. There is always more to things than the public story. So I started to dig in. 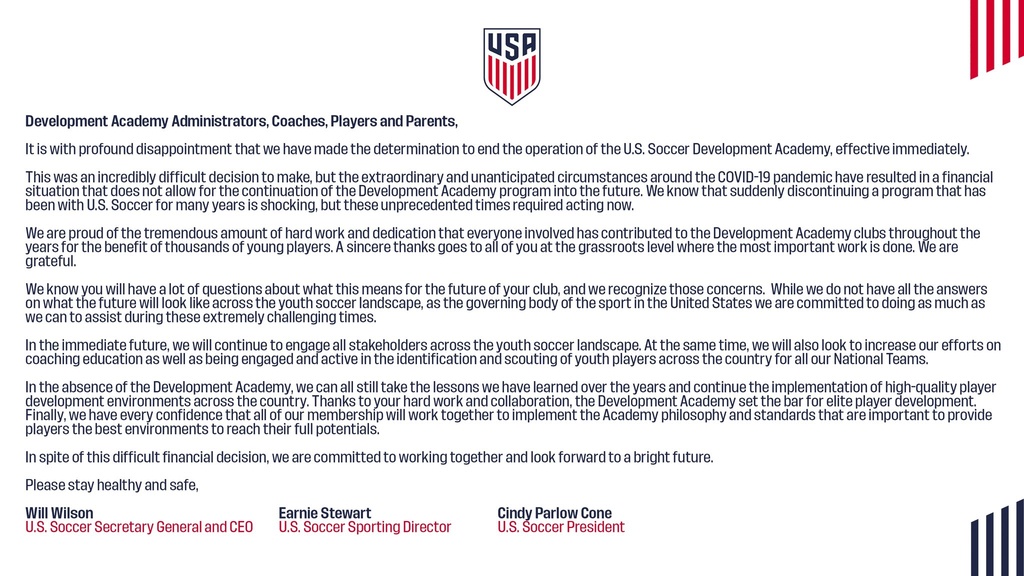 Contributing factors to closing the US Soccer Development Academy

The SoccerWire article lists four potential reasons for shutting down the US Soccer Development Academy (DA). I’ve listed them here for your convenience, but be sure to read the full article for the rest of the story and context.

On August 9th, 2019, USSoccerplayers.com reported in an article titled “US SOCCER ADDS ANOTHER ISSUE WITH DEVELOPMENT ACADEMY SPLIT” that the USSF was splitting the DA into two tiers: a red upper tier and a blue lower tier, and resulting in 44 teams being demoted. The move was described as a way to even out an otherwise uneven playing field in which some DA teams were getting crushed and others were dominating. This split caused a lot of stress throughout the system, but what’s also interesting is the use of the word “another” in the title. Previous issues were already on the soccer community’s radar. This split was seen by USSoccerPlayers.com author, Charles Boehm, as another in a series of issues plaguing the DA and USSF relationship.

It seems clear that the DA was struggling before COVID-19, not only for the reasons listed above, but an article written in Soccer America on August 8, 2019 titled “The DA’s new tiered format: The stigma of relegation without a clear path for promotion” suggests  that there was growing tension between the DA and the USSF. Specific issues surfaced in that article include:


Without reading you the full list of issues called out in these articles, it seems clear that a lack of trust and poor communication was affecting this relationship long before COVID-19 made the scene.

Less than 24 hours after the announcement there isn’t any clear guidance that I could find that will help former DA players and coaches in the future. There was a letter published by US Youth Soccer two hours after the DA Closure announcement that suggests that former DA players and coaches will be welcome in US Youth Soccer (see letter below), but uncertainty for DA clubs, players, and coaches is a likely concern for everyone.

Other options will include a move to ECNL or possibly to USL. In all three cases, logistics would need to be worked out. US Youth Soccer, in their letter below, seems to be opening the door to talks early. 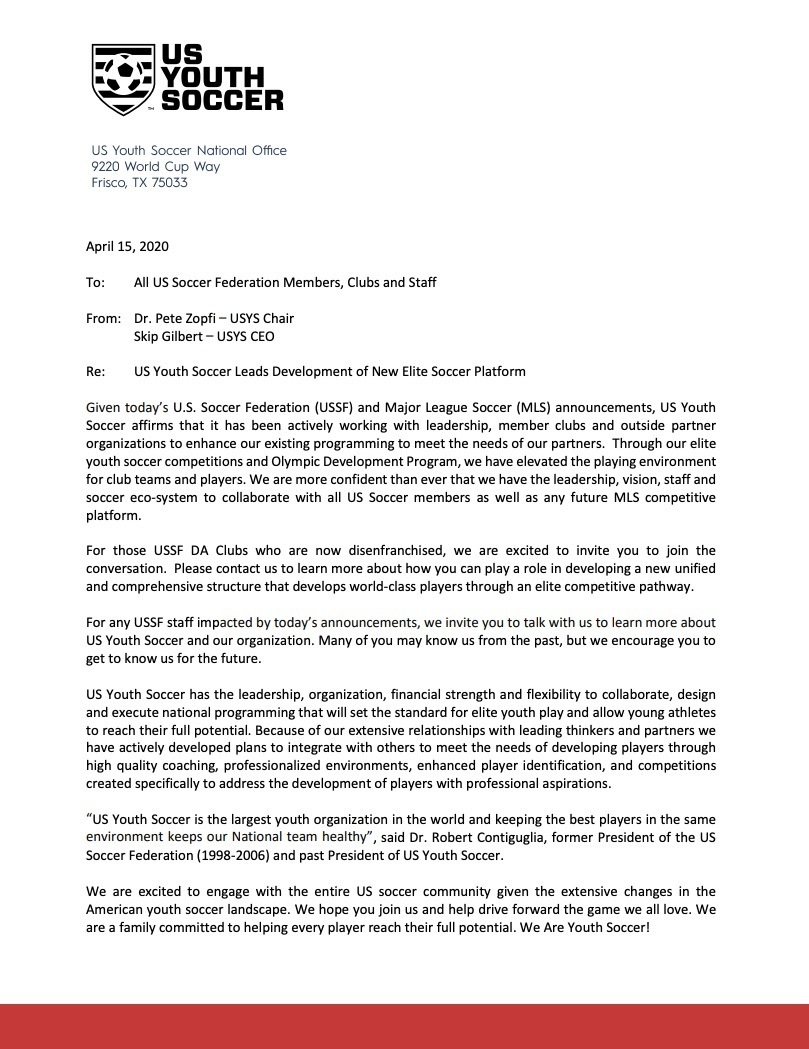 Please share your thoughts about this news. You can reach me by voice, by email, by Twitter, or by Facebook. Check out the ways you can connect with me here: https://thesoccersidelines.com/connect/

Culture of Swimming vs Soccer