Content Warning: This episode contains mentions of hacking, digital threats, and stalking. It may not be suitable for all audiences. Listener discretion is advised.

Vigil is a superhero, audio fiction thriller in ten parts from Adam Qutaishat (Button Podcasts) and All In Productions.

Subscribe on your feed to be the first to listen to Vigil, and learn more about the series and creators by checking out our website at vigilpod.com.

You can drop us a line at contact@vigilpod.com.

MARIA: Hello. It’s Maria again, and I wanted to provide you, our incredible fans, with an update on our series. A lot of the questions we’ve received recently have not just been about Vigil, but the show itself, and we’re going to provide you with as much information as we can.

Due to the popularity of the show, we’ve now been extended to ten episodes. However, that’s nowhere near enough time to explore the complex person that Vigil was—not to mention his incredible legacy—so, I’m happy to announce that we will be bringing you a Season Two of Vigil after our initial ten episodes. We’ve recently received access to a lot of new information, and we’re working on setting up some high-profile interviews to bring you an exciting second season!

Until then, we still have four more episodes of Season One, and they will not disappoint. We’re gonna spend some time with two more of Vigil’s important, early cases. Starting next week, we’ll meet one of Vigil’s top rivals in the industry. You don’t want to miss it. So, make sure you’re subscribed to our feed so you’re the first to know when a new episode drops.

Finally, even though I wish I didn’t have to, I’m going to address the most recent incidents with the individual known as “Morse.” You may have seen on social media that both the Hero Trackers and Vigil accounts have been hacked by an individual claiming to be Morse. Additionally, both Hero Trackers Studios and my home were delivered cryptic, threatening messages from this Morse. While it is not yet clear if this is an elaborate troll or the actions of emboldened internet bullies, our response is to unequivocally condemn this behavior and let you know that we will not be intimidated. Civil and heroic authorities are investigating, and you will be caught and held accountable for your actions.

Thank you to everyone who expressed concern. I’ve been covering the hero industry for years and this is far from the scariest situation I’ve faced. I ask that we move on from this incident and focus on the purpose of this series, which is learning more about Vigil, a HeroTrac podcast.

Introducing: Out Of Place

Introducing: What Will Be Here? 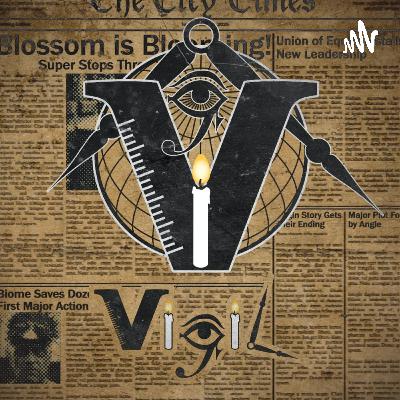