Ah Cumin. Cumin is that spice, you know, the one that is almost everywhere? It's used pretty ubiquitously across the subcontinent, from the southern tip of India, all the way north, and well into Central Asia. It goes to the east into China, and in the other direction across the Mediterranean and the Middle East. We also see it in North and East Africa, and then over the oceans into Mexico. Later in history, we see cumin show up in the Southern United States. This month Keith prepares an Afghan dish to celebrate this beautiful spice that is incredibly versatile. You can't imagine hummus, dal, garam masala, foul medammes, tacos or chilli without cumin. Grab your cup of tea, and maybe a cumin biscuit to go with it, and settle in for more than masala.
.
.
.
.
.
.
.
.
EPISODE SOURCES:
Maskevich, Adam. From 'Ancient Sumeria To Chipotle Tacos, Cumin Has Spiced Up The World', https://www.npr.org/sections/thesalt/2015/03/11/392317352/is-cumin-the-most-globalized-spice-in-the-world#:~:text=To%20the%20east%2C%20cumin%20traveled,from%20there%20throughout%20South%20Asia.

Prior, David The Jewels of Afghanistan. https://www.prior.club/inspiration/parwana-afghan-cookbook-durkhanai-ayubi

Sarkar, "From here to eternity - the secret of Pharaohs: Therapeutic
potential of black cumin seeds and beyond". https://www.ncbi.nlm.nih.gov/pmc/articles/PMC2583426/pdf/nihms-73138.pdf

How Black Cumin is Harvested in Afghanistan", https://www.rumispice.com/blogs/rumi-red-saffron/cumin-harvest

Ep 13. An Interview with Alak Nanda of Podi Life

EP11 More than Masala: In conversation with Charulata Moorjani

EP10 More than Masala: In conversation with Dr. Kurush Dalal

EP6: The first one off-script with Ragini and Chef Keith 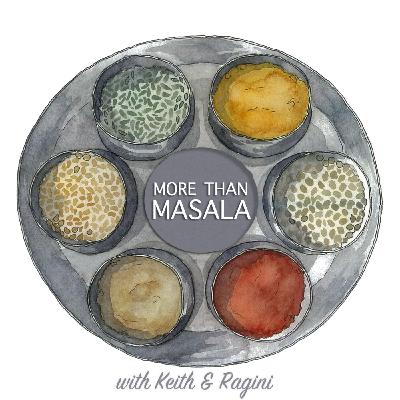 EP1 More than Masala: Spices, the quiet heroes of history